My childhood memories before I went so school are no longer clear or plentiful. Writing this now, there is a scattering of things that come to mind. I do remember the powerful summer hailstorms though. That’s when Mamma would get us to help her protect the windows by holding pillows against the glass to keep the hail from breaking them. After the rain was over, we would go outside and run around the yard and play in the puddles. I can still feel, in my mind’s eye, how smooth the ground was under the water. And how we loved to be barefoot.

I had red bib overalls that were ordered from the Eaton’s catalogue and they were pretty special. It’s not just because I have a picture with them on to help my memory, but I’m pretty sure there were no other girls having bib overalls when I was young.

In the winter, my brother Jim and I would use the sled to slide down the coulee behind our house. Later on, we had a toboggan and would go tobogganing from the west side of our yard all the way down to Johnson’s Hill. I mention the name of the hill because we lived about ½ mile from the South Saskatchewan River and almost every coulee and/or hill was named after someone or some historic happenings.

There was Grandma’s Resting Rock, Where Lobergs’ Cow Calved, Gust’s Slough Coulee, Where Tony Put the Oars, Squaw Graves, North Middle and South Landing, Sam’s Crossing, Jones Coulee, Birmingham’s Coulee, Peace River Coulee, Horse Shoe Thickets, Alkali Run, Burnt Hill, Freddy Peel Place, Shanty Hill.  Most of these places I only have a vague notion of where they were, but pretty well all of them are submerged in the water that makes up Lake Diefenbaker now.

Where Tony Put the Oars

I can tell you about a couple of those names, like Where Tony Put the Oars. You may remember that there was a lot of family across the river from where our farm was, so there was a lot of boating from one side to the other. The boat could be left in the water but it would be stupid to leave the oars in the boat – that was just a theft waiting to be taken! If you went to visit a mile or so away from the river when you came back to the boat it might be gone but not so if you hid the oars.  Apparently this is what happened with Tony: he hid the oars but couldn’t remember where he put them!  After that, if something was ever lost, someone would say it was “Where Tony Put the Oars”.

I was about nine years old and I had a pet calf. Well Daddy, said that it was my calf even though I never had ownership of it. I didn’t have a clue about the mentality of cattle and thought this calf was my friend. I would pet it and, as it got older, I would ride it. We were friends, or so I thought.

Jim and I were bringing the cattle home from down by the river in time for milking one day and I was riding my calf. We got behind the rest of the herd and my calf took off running to catch up with them. I ended up on the ground, landing on my right elbow. We were near Grandma’s Resting Rock  – a giant boulder that had been named because my grandma Sten had often sat on it to have a rest from what she’d been doing, and I sat down on it, holding my arm.

When we got home, Mamma pulled my arm and it went back into place. I dislocated it again riding Gerald’s bike down the hill from our yard to Johnson’s hill.  The bike was a bit on the big side for my size and I totally lost control going way too fast.

Errol Young was a teacher at Cherry Dale, a school that was about eight miles from our home on the road to Strongfield and he had soft spot in his heart for my sister Marjorie.  So, one Sunday, he and one of his students, Harold Paulsen, came to visit.

As usual, when evening rolled around, Jim and I needed to go and milk the cows, and Harold came to help.  He was milking the cow in the stall next to me and sprayed milk over the cow onto me – he probably liked me but I took it as an insult. I promptly ran around the stall and dumped him into the manger with a punch right in the nose. He was bleeding profusely and probably a little scared. Let me tell you, Harold Paulsen didn’t mess with me ever again.

Being the youngest of 10, I had quite the education before starting school. I could read and write by the time I was five years old and, in fact, recited the 27 verses of The Night Before Christmas at Stafford School at the Christmas Concert in 1939.

I really liked school. I don’t remember ever having any homework even in high school. I didn’t like to stay home from school even when I was sick for fear of missing out on something. I loved to come home from school to Mamma’s fresh out of the oven “rolled out bread”.

Our school, Stafford, was about 1 ½ miles from our place. I guess it would be ½ a mile to Uncle Paul and Aunt Beda’s (although I can’t remember ever calling them “Uncle” or “Aunt”). When I started school I was accompanied by my brother Jim and my sister Marjorie. We would walk to Paul and Beda’s and then some cousins would join us for the rest walk to school. We went down through another coulee, then across a field and through another coulee and on a road for the last ½ mile. The school yard was two acres in size and there was enough room for a full-sized ball diamond. We played softball a lot in the fall and spring and in the winter we played a game called Fox and Geese.

My sister Verna was the teacher that let me skip Grade 2. She was one of the best teachers I ever had and we learned a lot more from her than what was in the curriculum. We had Geography Matches to name places: if one team started with “Hanley” the second team would need to find a place starting with a “Y”, so “Yellowgrass“. Then “Strongfield”. And on the game would go.

We learned most of the names of the towns on the Saskatchewan Wheat Pool map.  We had Spelling Bees and, of course, we learned a lot of songs – Verna and Georgie, after all, had perfected the art of learning new songs. Friday afternoons were usually spent as Verna played the piano and the whole class would be singing along.

The Field Day as it was called back in 1943 was what was later called a Track and Field meet and was for students in the Outlook School Unit and my first. Daddy made a place for us to practice in our yard. We had a high jump and broad jump pit and loved to practice at home and at school. (I talked about the Field Meet of 1943 in the post about Ruth). In addition to 1943, I won best female athlete in the meets in 1946 and 1949. I used to say I never ran a race I didn’t win but that was before I had kids of my own and they could beat me by a country mile. I’m pretty sure I owe my athletic abilities to those good Swedish genes.

I remember one fall, my cousin Colleen was the one in her family that got the first ripe tomato in her lunch, and we all wished we were her. I also can recall being barefoot at school (as we loved to be barefoot as long as we could) in the fall and it snowed. I ran as fast as I could all the way home. It didn’t snow all that much, but I did have to walk home through the snow in bare feet!

Daddy drove me to Davidson to see the dentist when I was around 11 years old. Daddy went to the beer parlour at the hotel and had a few beers while I had my visit with the dentist. When I was done and able to get him our of the beer parlour, I got to drive our car, a 1940 Ford, all the way home.

One of the things we certainly should not have done was to steal cigarettes from Daddy’s Player’s Flat 50 package and smoked them. I can remember two places we smoked. Once was in the west part of the yard and the other was up along the road at the “East End” corner. Mamma wasn’t easily convinced that it was the ‘rose hips” or “cactusberries” that made us sick.

We had skis and Jim and I spent many a Saturday skiing down to the river bank and walking back up to do it all over again. Once we set up a ski jump and I hurt my left knee. Once in awhile, this knee still reminds me of that day.

When we were in high school we would sometimes go to dances in the ‘29 Chev with our cousins. It was often that the sun was coming up when we were getting home but Mamma still brought us coffee in bed the next morning 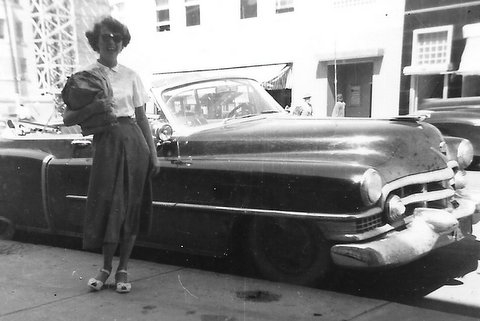 One day, the elementary school students in Strongfield were all going to Hawarden for a music competition.  The high school students had to stay in school because we had nothing to perform.

But once they were gone, us high schoolers decided to leave school and go to the park in Elbow instead of staying put. We took cars and headed off down the highway.  My cousin Glen was the only one in class that day because he was always late for school and had no idea where we’d gone! 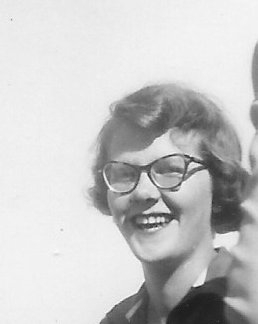 The park was right next to the South Saskatchewan River but it was May and the water was too cold for us to even put our toes in!  We were all kids from farms so we had our lunch with us and we had lots of fun. We waited till school would have been over before we came back to Strongfield and headed for our homes like nothing had happened.

Of course the next day our Principal, Earl Kyle, gave us a bit of a scolding. But the smirk on his face really told us he was pretty happy to be without us for a day.