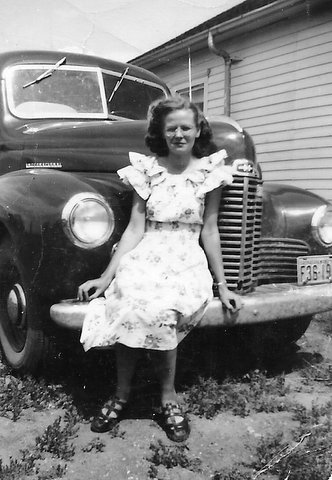 Ruth was the next sister in the family. She always had a mind – and opinions – of her own and was a very clever girl.

When Ruth finished high school, she wanted to go to University; she didn’t want to become a teacher or a nurse or any of the usual choices for girls at that time. No, not Ruth!

Ruth wanted to be an engineer, but there was no money for that, and no affirmative action programs for girls back then. And so, unable to pursue her dream, Ruth retorted by saying if she couldn’t be an engineer, she would “get married and be poor for the rest of her life”.  This was an example of her stubborn streak, and how tough it was to argue with her.

When we were little, Jim and I were accused of breaking the 78 RPM record of Louis Armstrong and his band playing “Muskrat Ramble”. The record was on the bottom of a stack of records next to the record player. Gerald and Ruth said it was our fault, telling us to come clean on this horrific crime.

The prosecutors were quick to point out the facts. Not only had we broken the record, but we had tried to hide our crime by placing it on the bottom of the record stack.

The defence had a weighty counterpoint. Did they not consider that a dozen or more 78 RPM records stacked on top of each other was, indeed, heavy and not exactly safe for the bottom one?

As far as family squabbles went, this one kept coming back at the two of us. “When are you going to own up?” they would ask. We didn’t break it, but there was no way we could prove our innocence.

Standing Up for an Injustice 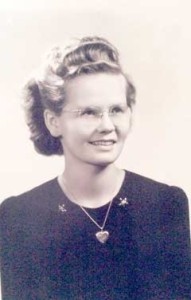 Ruth when she was young

When  I was an 8-year-old in elementary school, I entered the Field Day for the Outlook School Unit and won first place in all seven events I entered.  One of Ruth’s friends, Ron McClelland (who later became a Member of Parliament) was a high school student from Loreburn and he was the top male athlete, having also won 7 first place ribbons. At the Field Meet’s closing ceremonies, he was awarded the School Division trophy for best athlete, which he could keep for the whole of the upcoming year.

Although he was her friend – and I think he even had a crush on her – Ruth didn’t think it was very fair, at all.

So she marched up to the dignitaries on stage and pointed at me in the crowd, telling them that her sister, Maureen, had just as many first place ribbons as Ron McClelland had. And Ron and Maureen were joint best athletes and should share the trophy for the year.

This hit them like a bolt from the blue and it took them a while to discuss the merits of Ruth’s suggestion but finally, they agreed. Ron and I shared the trophy, each keeping it for half the school year. Sometimes you have to stick up for what is right, and Ruth did that because she saw it was wrong.

Ruth excelled at local politics and served as a councillor for the town of Craik for five years and then became the Mayor.