Verna was the first child born to the Stones and my parents were pretty sure their second child would be a boy and they would name him George. But it was a girl, and my Dad suggested to my Mom that they name her “Georgie” and she agreed. And what a soft, cuddly gal was she! That’s not to say she wasn’t tough, because Georgie had a mind of her own.

When I was born, the midwife, Mrs. Brun, wrapped me up in a blanket and handed me to Georgie.”You’ll have to look after her,” the midwife told her, “your mother is just too tired and is going to need to rest for some time.” Georgie did take care of me, letting our Mamma do the things she loved, like tending her garden in the spring, summer and fall. I became her shadow, and loved it!

Seventeen years my senior, Georgie sewed my clothes, fed and bathed me. Either she or Verna would rock me to sleep at night, but since Georgie was rather buxom and Verna was flat-chested, Georgie was the most comfortable rocker in the house! Verna was busy, skipping grades, but Georgie was right behind her trying to be as smart as her older sister. Of all the grades, she skipped Grade 7 and was disappointed she did, feeling it was the year that really gave students a good foundation. I remember her telling me that she later read that the “odd years in school are the most important.” 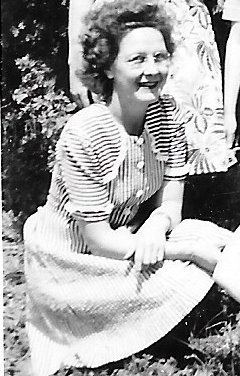 After she finished Grade Eight, school was no longer an option for her. Going to high school meant she would need to find a place to room and board as there was no high school near our farm. Unfortunately, with so many kids under my parents’ roof, there was no money for her to do that. So Georgie went to work as what we now would call a nanny but was then referred as being a hired girl.  Her first job was working for J.H. Miller in the Bonnyview area. Being a hired girl was no easy task. She wrote in her diary what she did in a typical day:

Georgie was a fun, popular girl. Many a young man courted her, but Georgie took me everywhere she went with her boyfriend at the time. She didn’t mind if sisters and cousins came along too, to picnics, ballgames, etc. You would find Georgie, her friend and this little kid, Maureen. Later, she would quip that “Having Maureen in tow was the best form of birth control ever!” Ha! 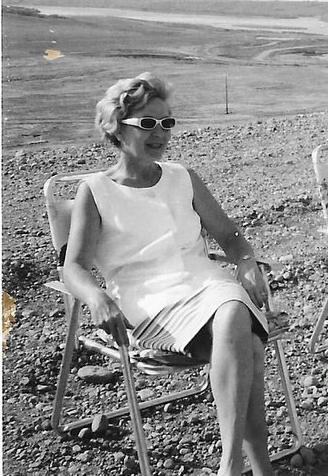 This picture of Georgie was taken at the time of construction of the Gardiner Dam, just a short distance from our home. Georgie was one class act!

Music was a major part of our household. As far back as I can remember the radio was on from dawn till dusk and later. What an exciting day in 1938 when Daddy brought home a new Westinghouse radio. It was wonderful, especially in the evenings when the reception was clear and we could pick up stations from Chicago, New York City and maybe even Tokyo!  It was almost a family catastrophe when the batteries needed to be replaced and we were without the radio till Daddy could go to the town to get new batteries.

Both Daddy and Mamma loved to sing but Mamma could also play the guitar and the accordion. I can clearly remember two dances held at our place – although our farm was the host to many more than two – one in our barn and one in our house. For the musical base, the school’s piano would be trucked in for people to take turns playing. It was easy enough for the men to get the piano into our house but hoisting it up into the loft of the barn quite was another story.

Anyone with an instrument would bring them – guitars, banjos, fiddles – and an instant band would be formed. Everyone was proud to show off their musical talents and it was almost a competition in the neighbourhood to learn the words to the latest songs being played on the radio to be able to perform them at a dance. People from far and wide would come to the dances, I remember the mens’ and ladies’ coats were piled high on the bed when I tried to crawl in to go to sleep.

The Science of Learning Songs

And she got me singing too. Helen Birch was the telephone operator in Strongfield and a great friend of Georgie’s. In 1936, the Moose Jaw radio station CHAB was running an amateur singing contest. Georgie taught me a cowboy song to sing and thought it was the best song she’d ever heard. Helen phoned the entry in to the radio station to put me in the contest, telling them that my older sister would bring me to Moose Jaw for the contest. However, at the age of 1 year and 10 months, they said I was too young and wouldn’t accept the entry. We cannot remember what song it was, but that didn’t stop any of us from singing, or learning songs. 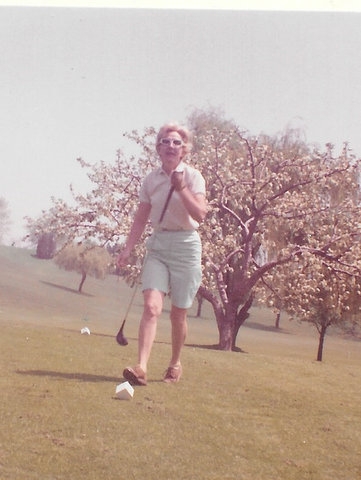 Georgie was an excellent golfer. Her handicap was an 8.

The Postmaster in Strongfield was was Reg Woodward and one of my Dad’s friends. In those days, all kinds of magazines were delivered to the Post Office. At the end of each period, if a magazine wasn’t sold, the front cover was torn off and sent back to the distributor so commission wouldn’t need to be paid. Reg would often give the rest of the magazines to our Dad.

Verna and Georgie loved the movie magazines and probably believed everything they read! The two of them would look at the way the actresses and singers would dress and try to imitate them with the clothes they sewed. One of Verna’s mottos was “Shoulders back! Stand tall” and Georgie was rarely featured in any photograph where she wasn’t truly posing – hands on her hips, her body at an angle. The two of them were absolutely extraordinary.

Georgie loved to write letters, after all, that was how we communicated back then. She had many pen pals all over the world and wrote to her favourite movie stars as well and they would reward her with post cards and pictures. I know she had pictures of Henry Fonda and Bing Crosby, for example. Daddy gave her the job of keeping in touch with family and it was Georgie who wrote the letters to uncles and aunts living in the United States, and who got to accompany my Dad when he visited his brother Henry in Minnesota in the 1940s – but that’s a story for another time. 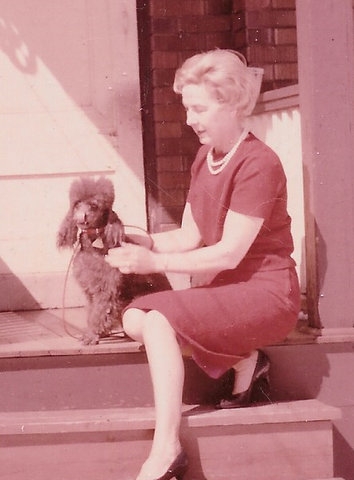 Georgie and her French poodle, Josephine

In 1939, Georgie went to Preeceville to work for the Myhr family as their hired girl. They had a large pig operation with 780 pigs. It was a job with more downs than ups, but while she was there, she met her lifelong friend, Dorothy Hagemeister. When she came home to visit, I was so happy to see her, but I was also angry that she had gone away, and I think that was the first time I realized she really wasn’t my mother. She had a boyfriend in Preeceville named “Pinky” who gave her a chain with two pink elephants on it, and she gave that to me to make me not miss her so much.

But back to Preeceville she went. Then one day, everything changed. By this time, Verna was in Stranraer, teaching, and one of the women in the village was sick and needed help. Verna called Georgie to ask if she’d like to work for the Stevensons, a family of six. Being fed up with living in the stink of a pig farm, Georgie was more than eager to change jobs and lived with the Stevensons for a year. It was in Stranraer where she met her future husband, Bill Rowbotham.

By this time, World War II was in full swing, and girls were being encouraged to help with the war effort. In 1941, Georgie and our cousin Marion went to a technical school in Saskatoon to learn about machinery. “Rosie the Riveter” was the poster girl at the time, showing that girls could do what any guy could do.  After their course, the two cousins went off to a job in Hamilton, Ontario where they worked for Westinghouse for a year, assembling anti-aircraft guns and having the time of their lives. They wore pants, had lunch boxes and could even stop in a bar and have a beer on their way home from work. Ontario was really ahead of the times compared to the rest of Canada when it came to laws allowing women into places where beer was served.

Then it was back to work for Mrs. Stevenson in 1943 who by now was suffering from dementia. Who knows now what prescriptions or placebos she was taking. Anyway later after moving to B.C. she wrote to Georgie to thank her for “bringing up her kids”. Actually the kids – John, Jean, Willie and Doris – were not much younger than Georgie. Georgie loved her work there. 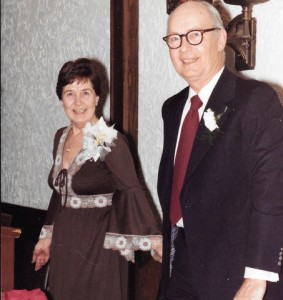 Georgie’s husband Bill was a one-of-a-kind. He was a very talented design engineer and comfortable with kings and farmers alike. Everyone liked Bill. He was dedicated to his work and often lost track of time, working long into the night. Bill was a keen curler and you’d often find him at The Dundas Valley Golf and Curling Club near their Hamilton home whenever he had some spare time. Bill liked to curl more than he liked to golf, but was good at both. I loved him!

Georgie had two children, Will and Deborah, and lived a full life: playing bridge, curling, golfing and traveling.  She lived to be 96 and before she died said she had lived “93 good years”.  Many will have fond memories of happy hours with Georgie, especially Rusty Nails, concocted with Scotch and Drambuie.

Georgie and I were always close and I miss her dearly.