My sister Verna was the first child born to my Mom and Dad.  She and her younger sister Georgie were the first students at Stafford School in 1924, the year it opened, a school that was just one and a half miles away from our farm outside of Strongfield, Saskatchewan.  Verna was very clever: she skipped many grades and finished Grade 8 in just five years.  Her classes in Grade 9 included French, Latin and German. 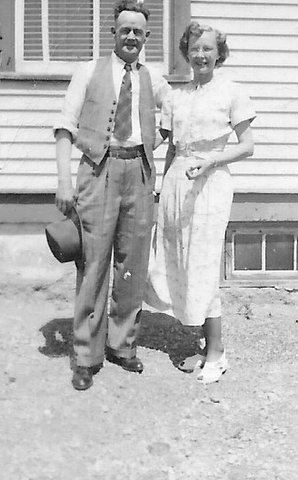 After she finished High School in 1936, she attended the teacher’s college in Moose Jaw, a school called the “Normal School”.  Georgie wrote in one of her diaries that at the graduation dinner, they sat beside one of the students’ boyfriends, noted Canadian broadcaster Earl Cameron.

Verna’s first position as a teacher was at a country school eight miles from the town of Craik. Her salary for that ten-month position was was $300.00.  She found a place where she could room and board with the Wood family. Out of the $30.00 she received each month, Mrs. Wood charged her $15.00.

When Verna came home at Christmastime, she brought with her decorations for our Christmas tree, and that included some candle holders. Back then, candles were used to light the tree, and that was the first time we’d ever had our tree lit up. How we never burned the house down is a mystery and a miracle, but I do remember that these candles didn’t stay lit very long before we blew them all out!l 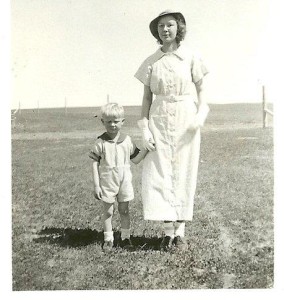 Verna and my brother Jim about 1935

In addition to the decorations, she also brought home a board game that was all the craze, but her Monopoly game was one she made herself!  It was the exact size and colours of a bought one, but she had only enough money of her own to buy the money for the board game.  Oh what fun we had playing Monopoly for years and years, always using the board that Verna had made.

Of course, this was during the Great Depression of the 1930s and my family was suffering as well as everyone in Saskatchewan.  My parents certainly had no extra money to spend on Christmas presents, but Verna was our Christmas angel. She bought presents for Mom and Dad and all us sisters and brothers.  I was just four years old, and it was the first time that I had ever received a Christmas present.  I don’t recall now if I thought the present came from Santa Claus but probably that was the case.

It was a doll, a doll with a ceramic head and silky, brown hair. Her body, arms and legs were stuffed and soft.  Now, unlike my brothers and sisters, I was growing up without any babies in the household, and I didn’t quite understand at first what it was I should be doing with the doll, as I was only used to playing outside. But I loved it, nearly as much as I loved my generous sister.