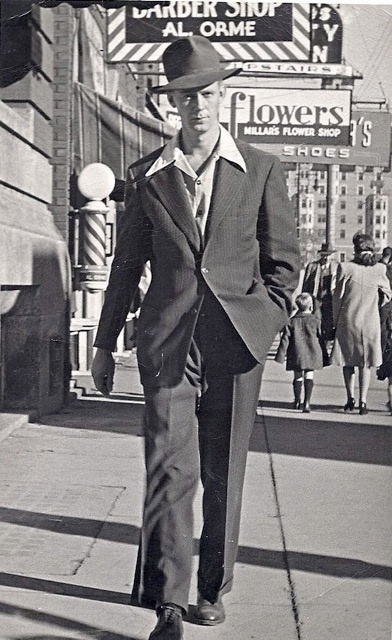 Gerald in Saskatoon in 1942

When Gerald was a young lad, he was playing around our barn. Our barn door was heavy, at least 150 pounds if not more, hanging on rollers to cover an entrance large enough to back a hay rack into.

I don’t know if he was pulling on the door or trying to swing on it, but somehow the door left its rollers and fell on him. That could have killed him, but it didn’t, but after that, he always had a pain in his side which rarely went away.

Gerald was tall and a very good looking guy. He was funny, loved to tease, and at any of the dances we would go to, the girls were all wishing he would come and dance with them. He would dance with his sisters, but he wasn’t all that interested in dancing with the girls sitting along the side of the dance floor, much to their disappointment – but it was most likely that pain that held him back.

When World War II broke out, my Dad wouldn’t let Gerald enlist because he was worried about the side pain. Ironically, if Gerald had signed up, they would have found out what was wrong with him then and he could have had it treated. But he didn’t sign up, and they didn’t find out what was causing that pain for a few years more, when he was 26. His pain was being caused by a non-working, immature kidney and once it was removed, his barn-door pain finally went away. 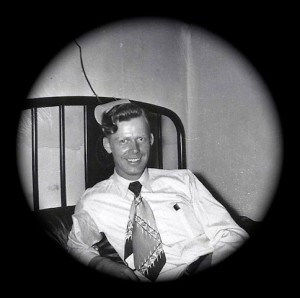 Gerald – All dressed up to go dancing on a Saturday night.

A piece of the Stone

All the girls wanted a piece of Gerald and no Stone boy of that era was chased harder than what Gerald was then. None of us thought he would ever settle down, but he did. Gerald’s life changed when he met Dorothy Lear and he finally handed over his heart to her.

Gerald went to high school at Wheat Plains School about 10 miles from home. To get to school, he rode his bike for the 20-mile round trip until the winter set in, and then he stayed with the Hans Hauberg family until spring. Once the snow melted, Gerald was back home, riding his bike to school once again.

Watt Can I Tell You?

In the early 1950s, he began to work as an apprentice to be an electrician and in 1955 he obtained his Journeyman papers. He had a spark for electricity and was a shockingly good electrician! He returned back to the original farm area and his work took him all over our neck of the woods, for miles and miles – from Rosetown to Lumsden. He was good at many things. In fact he and Dorothy built their house themselves on their farm just a few miles away from where I grew up.

I remember the year that Mamma and Daddy went with Verna, her husband Frank and their son Gregory to Hamilton to visit Georgie and her family in 1948. With my parents out of sight and out of mind, our house became party central, a gathering spot for my older brothers and sisters and their friends.

After one of these gatherings – an evening of food and drink – they told me that I had to wash the dishes. I, of course, refused (after all, it wasn’t my party) and ran and crawled under the bed in Mamma and Daddy’s bedroom. Gerald came to pull me out from under the bed and while doing so, he broke the crystal on his watch on the bed frame. I don’t know if I ended up doing the dishes or not, but I do know that Gerald was furious!

His  electrician skills were instrumental when he was hired  by the Saskatchewan Water Corporation as Watermaster.  He spent many  years monitoring the water used from the canal. This meant that Gerald would drive along the canal from the dam to Outlook every work day, which allowed him to meet and visit with his farmer friends. Much later, after our Dad died, our Mamma moved to the Sunset Seniors complex in Outlook. Gerald would make his lunch at home and go and spend his noon hour with Mamma. He was a son with a good heart! 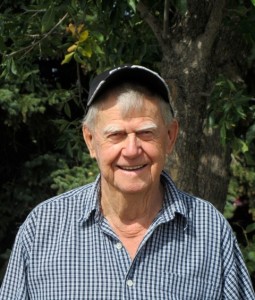 If I said that Gerald loved being on the farm, I’d need to say that is an understatement. It was there that he did the things he loved to do, which included baking bread and riding his bike. And strangely enough, his bike riding wasn’t just good for his health, it was mandatory for it.

When he was in his 70’s, Gerald got sick and was admitted to the University Hospital in Saskatoon. He had a hard time describing what he was feeling and, at first, the doctors had no idea what was wrong with him. Then one young intern suggested he must be suffering from the extremely rare Guillain-Barre syndrome. And he was, joining a list of 7 other known cases in the entire world. With his immune system attacking his nerves, the only relief Gerald was able to get was by riding his bicycle. And so he did, or continued to do.

He rode his stationary bike downstairs in the basement when the winter weather was very cold and the rest of the time, he rode outside. Every day you could see him riding on the highway.  He would ride five miles out and five miles back or 10 miles out and 10 miles back. Gerald was no fair weather biker either: whatever the weather, Gerald was out, in it.

Gerald loved music and was known for whistling and singing wherever he went.  He played many instruments including the piano, guitar, trumpet, saxophone and clarinet.  I can hear him picking and singing Old Dogs and Children and Watermelon Wine by Tom T. Hall.  I miss you, Gerald, and your regular phone calls.