My sister Marjorie is four years older than me.  As my older sisters grew up and moved away, Margie and I (click the link to hear the song) were the only girls left at home, and we did many things together. 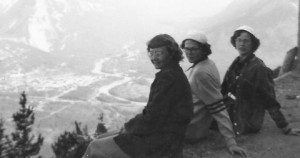 Three Sisters above the town of Banff in 1951

The first trip we made was by bus to visit our sister Edna who was then living in Calgary.  We went on a day trip to Banff and Lake Louise to see the Rocky Mountains. Now these mountains stretch for a long, long way in North American but I’m pretty sure you’d agree if you’ve ever seen them that they are the most spectacular in the Banff and Jasper National Parks. 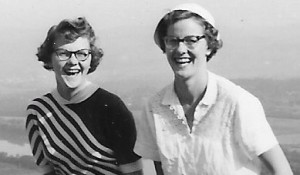 The next trip we took, in July 1952, was by bus again.  All the way to Chicago, then Detroit, across the bridge into Canada and on to Hamilton, Ontario to visit my sister Georgie and family.  We, of course, toured the local historical sites like Brock’s Monument and Niagara Falls.  At Niagara Falls, an hour’s ride on the Maid of the Mist got us up personal and close to the falls.  We wondered why they gave us waterproof slickers when we got on the boat, but when we were close to the falls and the water was splashing in our faces we quickly realized how important those raincoats were.

A few days later Bill, Georgie, their small children, Willy and Deborah, and Marjorie and I packed into their Oldsmobile and headed into the United States at Buffalo, New York. We were headed to Washington, D.C., to see the nation’s capital.

One of the first things we did crossing into the USA was to stop at a small roadside cafe for lunch. The cafe was bright and cheery, with windows facing south – and the sun was shining. There were red and white checkered tablecloths on the eight tables; fried chicken was their specialty, and we all ordered it. The fried chicken was served in a cardboard box and not only had I never seen food served like this before, to this day I have never had better fried chicken! 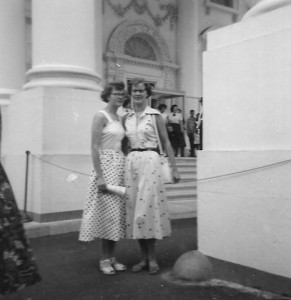 Maureen and Marjorie in front of the White House Washington, D.C.

After a stop in Baltimore, we made our way to Washington, D.C.  It was very, very hot when we arrived at the Capitol and the heat had forced people out of their homes and into the street. Our hotel was on one of these popular streets, but Marjorie and I had a problem: the door to our room wouldn’t lock.  With all the chuckin’ and jivin’ going on in the street down below, it was nearly impossible to sleep, but with a door that wouldn’t lock, neither of us could sleep, even if we wanted to!  We ended up in Georgie and Bills’ room and slept with the kids.

We toured all the landmarks AND we were even allowed to tour the whole WHITE HOUSE.  You certainly can’t do that any more! On our way back, we took a different route so we could take in a Major League Baseball game but when we got close to Pittsburg, Pennsylvania, it started to rain.

The game was postponed, so no baseball for us.

I spent most of my adult life in Regina and the first three years I lived with Marjorie – either on our own or with our friends Liz and Leah. She wasn’t just my big sister, many times she was my banker!

In 1956, we decided to go to Waskesiu in the Prince Albert National Park for a week’s vacation. Waskesiu is now called a resort but back then, it had great fishing, cabins you could rent, and a golf course. After we checked into our cabin, we went to the golf course to see if we could rent some clubs and get a tee time: we were novice golfers and I don’t think either of us had clubs of our own then.

The Assistant Professional at the course told us we were in luck. Did we realize it would cost us less if we played in the Lobstick Tournament that was starting the next day than if we paid green fees? As for clubs, we wouldn’t need to worry about them: he would throw them in for free! So we signed up for the 3-day tournament. It didn’t seem to matter that we were beginners: everyone was exceptionally kind to us. 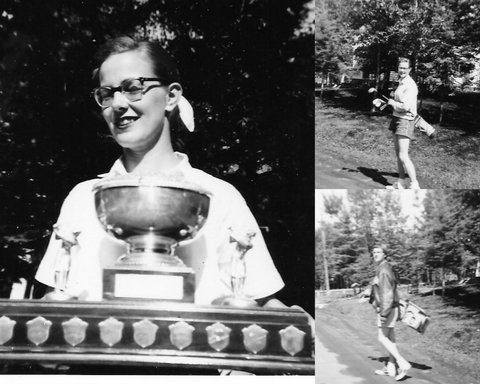 Marjorie and me at the Lobstick Tournament

The Lobstick Trophy was awarded to the low net player. Neither Marjorie nor I had established handicaps, but somehow they found a way to figure our net score. And guess what? Marjorie won, with a low net of 77, narrowly beating me by a stroke! She received a large plaque as well as a pitcher fashioned after the “Open Championship” trophy awarded in Europe.

What fun our week in Waskesiu turned out to be.

As I’ve written before, Regina was a great place to be in the 1950s for young people, and we had a lot of fun and always had something to do, and energy to spare. We loved doing things – we had Season’s Tickets to the Saskatchewan Roughriders, had dances and picnics and bowling and you name it to go to. And after Waskesiu, we both really fell in love with golf and looked for every chance we could to get in a round. Sometimes we would get up early and play nine holes at the Craig Golf Course before we started work.