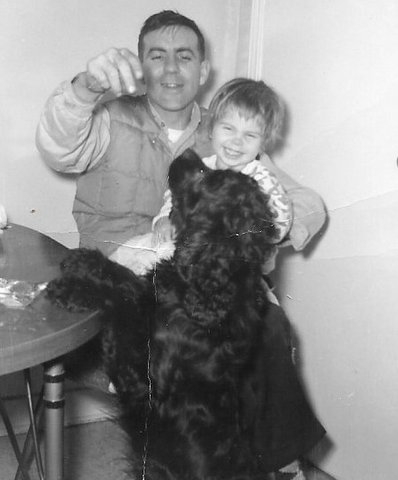 Some of the dogs in our family.

Growing up on the farm we always had pets – a dog and a cat or two. Mama was the only one that liked cats and my daughter Lisa loved my mother’s cats too when she was a little girl. I can see them now, on the cement steps just outside her kitchen, Lisa trying to organize them into her lap, my mother talking to her, telling their names or some other details.

The cats weren’t allowed inside, but sometimes one would sneak into the house. We had good milking cows.  My brothers milked the cows and brought the pails of milk into the kitchen where we had the cream separator.  I think the cats could smell the milk because before you knew it, a cat would be in the kitchen, drinking milk out of the pail of milk. Out went the cat, always landing on its feet!

My Dad was only interested in cats to catch mice in the barn.  As soon as he found a “mouser” in the litter, the rest of the kittens mysteriously disappeared. 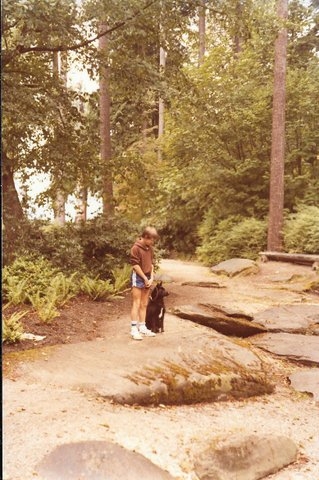 Murray and Jesse in Stanley Park – Vancouver, BC

A dog, on the other hand, had a special place in our hearts.  We had coulees on both sides of the yard and these coulees tapered down to the South Saskatchewan River about 1/2 mile away.  There were no residences for miles to either side of our farm along the river.  Wildlife was abundant and having a dog meant the chickens were quite safe from the coyotes that roamed close to our home.

We didn’t know much about training a dog in those days.  Nobody walked the dog, in fact the dog was pretty much on the loose, all the time.   I never heard of the word “spayed” till I grew up.  I do remember one of the dogs we had was Spike and he was a cross between a Collie and a type of retriever.  Although our cats slept in the barn, our dog was allowed to sleep in the house in the winter.  He was more the pet of my brother Jim than me. About the only trick our dogs did was to “roll over” on command.

I remember my Dad traded two year old pigs for two ponies once when Jim and I were youngsters. I would think we were between 11 and 15 at the time.  Jim’s pony was black and was named Pal, and mine was sorrel, named Nettie.

Pal was, to say the lease, skittish.  Try as he could, Jim could never get on Pal to ride that he wasn’t bucked off.  We had a very big barn that must have been almost 30 feet high. The last time Jim tried to ride Pal he was bucked off and landed on his back, knocking his wind right out of him!  I ran to the house to get Mama and she came and pounded him on his back and got him breathing again.  Jim said he was bucked so high that he could see the top of the barn! I must admit that I am still afraid of horses.

Terry and the Creek 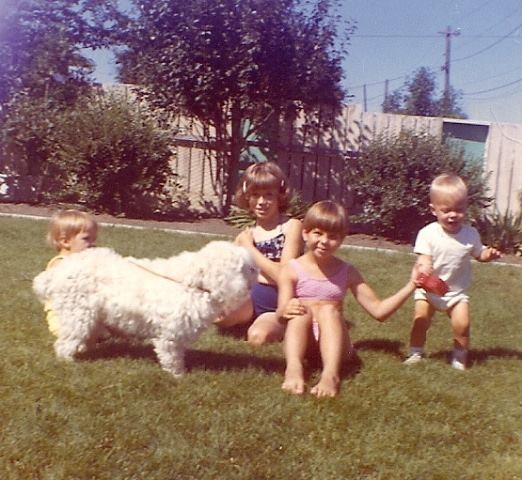 My husband Doc loved dogs.  He could hardly wait to get a dog when we were married and our first dog was Terry, a black cocker spaniel.  He never left our yard except for one time when he wandered down to the Wascana Creek in Regina, Saskatchewan.  He was so smelly that I think he even disliked the smell.  After a good tub bath he never went on that adventure again!  When our kids were growing up we had a few dogs, including the one you see above, Fang, who was really Edna McPherson’s dog, but lived with us for a while.  I remember my son, Murray, tried to train a dog we had named Jesse, but whatever he taught, it seemed like one of his sisters would untrain. 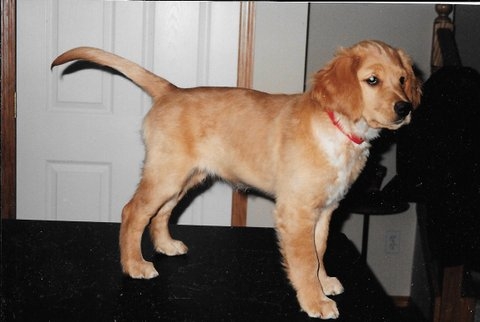 River, Rivergirl, Girlie – as a puppy

My daughter Bridget’s first dog was River, a beautiful golden retriever, the smallest one of the litter.  She was truly Bridget’s love but the rest of us received River’s love in abundance.  I was one of the lucky ones to have Rivers company at my house for sleep-overs many, many times throughout her lifetime.

Tears come to my eyes just thinking and writing about River Girl.  She was a bit naughty (like her owner was as a child) and although she never really took to training she lived an exceptionally long life.  River even recognized my voice over the telephone and loved to come to my place.  I’m miss her so much. 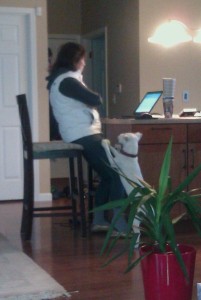 Colleen had a Jack Russel terrier called Yardley and a wide variety of nicknames including Yardsee, White Rat (he was all white) and Pooh Boy. I must admit he was quite the character.  He was the first dog I knew that liked being in his kennel.  It was called his “nest” and he loved it.  He barely fit in it and maybe what’s why he liked it. Very cosy. When I visited them he would crawl into bed with me, under the covers, and sleep by my feet.  As soon as he heard that Colleen was up he would high-tail it down stairs to see her. He could talk, too. Really!

I was quite young when my Dad gave me a calf.  Well, not that he gave me ownership in writing but I seemed to think of this calf as mine.  I thought a calf was like a dog and I petted it and when it was a bit older  I would sit on it and it would give me a ride.  I was pretty dumb in that thinking.  My brother Jim and I were bringing the cattle home one day from close to the river.  I was riding “my” calf and we got behind the herd.  My calf decided to run to catch up to the herd and I fell off…

…and dislocated my right elbow.

We were about a mile from home and I was in quite a lot of pain.  I told my brother to go home and I would just lie there and die!  He insisted I go home, with his help, and Mamma put one hand on my upper arm and with the other hand pulled my wrist and popped my elbow back into place.

Riding a calf is not a good idea!