The prelude to the 28 years with Doc were covered in these previous posts:

However, I’d be amiss if I didn’t give you a brief recap, as I know those three stories, despite being good reads, are content-rich and take time to read. So here’s the Coles Notes version of those: Gerald Patrick Merlin O’Shea, or “Doc” to most, was the adopted son of a town doctor and a schoolteacher. He was born in 1929 in Winnipeg and by the time he was two years old, his single Northern Irish mother — and you need to remember this was the start of the Dirty 30’s and the Dust Bowl in the Canadian prairies — no longer had the means to support both herself and her little boy. The O’Shea’s, already in their 50s, had been barren, and they and two other relatives of Bridgetta Connaughty O’Shea all adopted children at the same time. Both Bridgetta and Dr. Joe were strict, practicing Catholics and had met and wed in the booming town of Wilcox, Saskatchewan where Joe became great friends with the parish priest and future Monseigneur, Athol Murray, better known as “Pere”. The two men had a lot in common, like love of philosophy, poetry, country — and speaking French (Pere was born in Toronto but attended college in St. Hyacinthe and Joe studied medicine in Quebec City using money he earned working for the railway to pay his tuition).

Growing up, Doc knew a lot about medicine, having driven his father, and assisted him too, as he made his rounds. But Doc was fascinated with machines: automobiles, airplanes and trains and urged his father to buy what he thought were the best cars on the market. The family moved from Wilcox to  Norquay and ran the drug store there and when the doctor retired, they relocated to Chilliwack, BC for one brief winter. Unfortunately it was a winter so uncharacteristically cold that come spring, they hightailed it back to Saskatchewan — but not before Doc had taken flying lessons at the local airport and earned his wings.

Doc wasn’t the studying type but was mechanically inclined and those skills landed him a job as a petroleum technician, working shifts at the Co-op Refinery. This refinery was one of the many oil refineries that popped up in the northeast corner of Regina during the oil boom that took place in Saskatchewan starting around 1955. By that time, both his parents had passed away, and as a single child, he inherited his father’s car and his parent’s two-bedroom house on Cameron Street in Regina and a section of land just north of Norquay. Doc was busy: working, logging hours at the flying club and dreaming of buying an airplane of his own. And he was dating and part of the jam-packed social scene in the greater Regina area, where parties were spent around the piano, singing, and everyone supported the home team, the Saskatchewan Roughriders.

Although I had met this handsome, charismatic man through one of my roommates, it was really a chance meeting in 1956 on the Rider Train to Edmonton where he began to be interested in me. He’d get off the night shift in time to drive me to work and we fell in love. We planned to elope to Vancouver at the end of April — just after his April 24th birthday — but beforehand, Doc needed to go up to Norquay and sell some grain from the farm, intending on using that money to buy an airplane he’d put a deposit on — and on his way back to Regina, his car left the highway and rolled. When he was found, just off a correction line north of Yorkton, he was conscious and knew his back was broken. The folks at the hospital in Yorkton arranged an Air Ambulance to Regina and at the Regina General Hospital, no one believed he would pull through.

And no one knew that Doc and I were about to marry. With no next of kin, but Doc being well known, Pere was called to come and give him his last rites. Pere knew Doc had been dating a woman from Saskatoon and she came down to Regina running.

Days later, I finally found out that Doc was in critical condition. After operations that included a bone graft (with a bone from a a 19 year old man who had died in a car accident) where five vertebrae had been smashed. This operation lasted some 18 Hours with Dr. Ralston carving the bone to fit. The orderlies told Doc they had never worked so hard with their arms holding his spine open to get the graft in place. 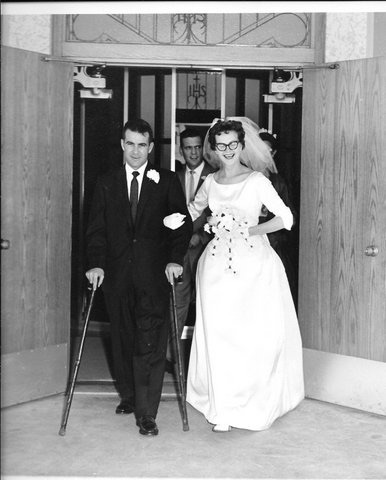 He started rehab with Sheri Wenaus, the hospital physiotherapist, and between the two of them managed to get him walking. Doc left the hospital with braces to support his paralyzed legs and canes to help him walk. Before he left, the Co-op Refinery Personnel Manager made a visit to his room and convinced him it would be best if he resigned from his job.

I didn’t care if he had trouble walking. I didn’t care they’d given him three years to live. We were in love and determined to make the most of the short time we might have together. When we had our Our Halloween Wedding in October, 1959, we were determined, had a dream of the future and felt that we could do anything as long as we were together.

We were operating the service station at Winnipeg Street and 10th Avenue in Regina the first two years we were married. Doc was a firm believer in the honesty of people. However he learned that more work was being done by the mechanics after hours with parts stolen from the service station. I didn’t spend much time at the first service station.  I was working in the Accounting Department at Imperial Oil Limited Producing Departmemt. We sold.

We had a cozy, unique, two bedroom home at 2949 Cameron Street. Mrs. Paztor was my cleaning lady. She not only cleaned our house every Friday but she ironed our clothes, sheets and pillowcases!  I can still remember how the hardwood floors in the living room were waxed and  the smell of the wax met you when you opened the front door.

We bought the Texaco station at Albert Street and 14th Avenue.

Life was good. Well as good as it could be under the circumstances.  Doc had exceptional mechanical expertise when it came to all makes and models of cars and trucks. He had a Model A as a teenager and probable knew every part of that car. We even bought another one after we were married. It amazed me how he could tell what was wrong with a car just listening to the sound of the engine. Long before computerize parts and analysis there were mostly the Big Three (Chrysler, Chevrolet and Ford). And he knew them all. We both pumped a lot of gas, checked the oil and tires.

I also did the days accounting every night. We had aquired an electric calculator when we bought the service station.  It had a tendency to lock up when I was trying to balance the days sales. Often this happened late at night, sometimes after midnight.  Then I had to do it all over again, manually!

I don’t think operating a service station was a great idea for Doc. Regina was not that big a city in 1959 (maybe 160,000 people) and Doc was not born and raised in Regina. He had attended Campion College in High School. Making lifelong friendships was not easy living in the dormitory with Saturday afternoon was his only free time. He had a close relationship with the people of Wilcox,  having gone to Notre Dame College living with his Mom and Dad. The Lawrence’s had been in the service station business in Wilcox for years and most residents were loyal customers to Lorne (Dutchy) Lawrence. The term “networking” was not used in those days. Perhaps it would have been advantageous for Doc to have been active in a service club (he was a member of the Knights of Columbus) but after a day at the service station he was too exhausted. He was carrying heavy braces on his legs and most days he was in pain. We sold.