It had been nearly a year since the accident and the day our lives turned upside down. We had been so close to getting married before the accident happened and then months of not knowing what was to become of Doc, let alone what the future would bring for either one of us!  One thing I knew for sure was we had become the best of friends. Then, over time we’d regained our love for each other! I was mad about that boy and he about me.

It was amazing how nobody ever took me aside and suggested that perhaps it wasn’t the best idea to marry a guy with braces on both his legs who walked with two canes.

And most time he would put on a brave face but he was in pain. That pain would come and go and couldn’t be localized and was likely originating from his spine. He, of course, was not interested in more surgery on his back as there was a big chance that if they operated on him again, he would end up with more paralysis.

Dr. Ralston told him that he would be lucky to live three years. We thought we would take the chance because three years together would be better than none. So that’s what we did.

When Doc and I got engaged on in the middle of July, 1959 there was a party going on at the home of Terry and Eula Ennis. Their house, in the brand-new Whitmore Park subdivision of Regina, was right next door to Bud and Mavis Hilderman’s home — where I was living at the time. When we stopped in to show them my ring, everyone was so happy for me – for us!

Living with Mavis was such a treat as she was wonderful cook. I adopted some of her favourite recipes: one we still use for practically every birthday in my family is from a lady, Mrs. Butler, from Indian Head, Saskatchewan, who gave the recipe to Mavis, and she passed it on to me. 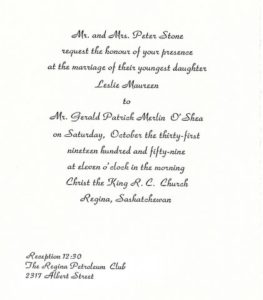 There were things to do to get ready for the wedding – invitations to be sent, a place for the reception to be nailed down — and then there was the religion question. Since I was a member of the United Church and Doc was a Roman Catholic, it looked like a compromise might need to happen there. I did go out to Wilcox and talked to Father Malloy about the Roman Catholic religion, but it just didn’t seem what I wanted to do. So we planned a wedding at Christ the King Church in Regina — without a mass — for October 31, 1959 — Halloween!

The invites were sent – my sister Georgie would be making the trip from Hamilton – and I found a wonderful dress and paid a small fortune for it – $265 – and the date was set for the last Saturday in October, 1959. As it turned out, that was Hallowe’en. 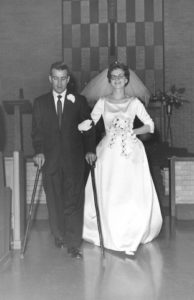 Ten days before the wedding, on October 21st, some time around noon, I developed a sharp pain in my side. I came home from work and went straight to bed. The pain did not subside so around 6:00 p.m. I called one of Doc’s close friends, Bob Galloway to come and take me to the General Hospital.

Two hours later, I was out of surgery, having had my ruptured appendix removed. I stayed in the hospital for about a week.

My well-fitting wedding dress now hung on me. I’d lost 10 pounds since the surgery, and although the scar was healing, I was still weak. The night before the wedding, after the rehearsal dinner, I was totally exhausted. 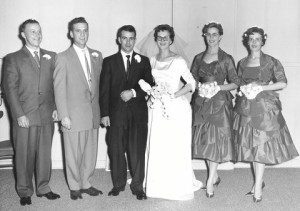 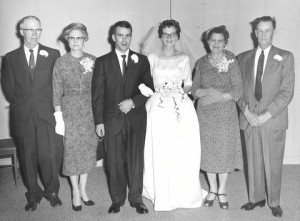 We had the reception for family and friends at the Petroleum Club on Albert Street. A friend of mine from Imperial Oil Limited, where I worked, Don Hutchinson, gave the toast to the bride. Daddy paid for the reception. Marcella and Hughie Gordon, Doc’s closest living relatives, were also there. What a great day it was.

We came back to Doc’s house at 2949 Cameron Street and changed into our “Going Away” clothes for a honeymoon in Minot, ND. The doorbell kept ringing because, of course, it was Halloween!! 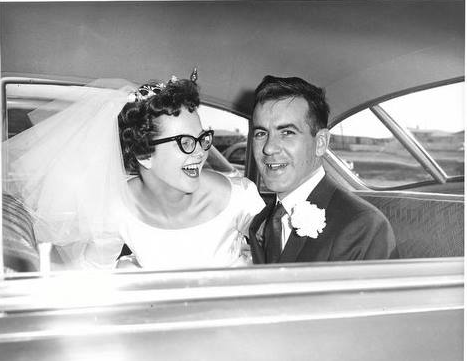