Fifty-eight years ago, on his 29th birthday, Doc had been working the night shift at the Co-Op Refinery in Regina, Saskatchewan. He finished at 7:00 a.m. on the morning of April 24, 1958 and instead of going home to sleep, he headed off to Norquay to go up to the farm. 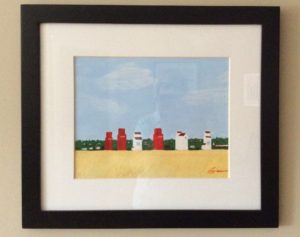 I’m not really sure why the Doctor and his wife bought that farm four miles north of Norquay to begin with, but it might have been to help the family who was renting it out. Harold and Adeline Ferris weren’t just renting the land, they and their children were living on the section’s home quarter, where there was a house, a barn for livestock, and some wooden granaries in the yard.

With both of his parents dead, Doc continued the pattern they’d established, renewing the rental agreement each spring and collecting the rent for the year ahead. For Doc, this year the timing was perfect. He had just put a deposit down on an airplane in Regina, and the rent money would cover the balance of the purchase price. The next time he’d be going to the farm, he’d be flying there in a two-seater Cessna. 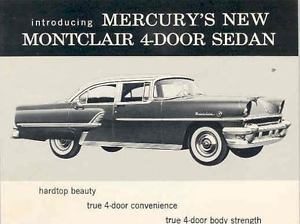 The day before, Doc had put four new tires on his car, a 1955 Mercury Montclair. He noticed, when he was driving the 180 miles to the farm, that the car was not steering properly, and he could tell it was related to the new tires. Once he got to the farm, he made a point of telling Harold that he was going to take the car back to the tire shop in Regina as soon as he got back to the city, to get them to check them out. He stayed for dinner with Harold and Adeline and it was around 10:00 pm when he left the farm. 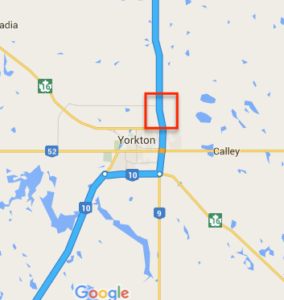 At the time, Highway #9 was a two-lane highway, edged by gravel shoulders. As was the custom back then, there was a sharp drop from the pavement to the gravel, and then the ditch beyond. The stretch highway between Canora and Yorkton on is mainly straight until you are just outside of Yorkton. The highway turns quite sharply to the left, then straightens out to go south again. This turn is to avoid a swamp area and a large slough. On the west side is farmland, and a purpose-built approach giving the farmer access to his land.

Doc said it was a bright moonlit night and very, very cool. As he was approaching the turn north of Yorkton, he felt the car move over to the right and onto the gravel shoulder. He immediately knew the car was in major trouble and he was losing control. Unaware that his front right tire had lost its beads, his instincts told him it was going to roll. There were no seat belts to keep him in place: Doc dove to the floor, trying to grab ahold of something solid to keep him inside. There wasn’t much there. The heater tubing came off in his hands.

Out of control, the car hit the approach road and rolled, and rolled, and rolled, into the field beyond. Doc landed outside the car and realized he was lying in a stubble field. He could hear the car, it was still running. He put his hand to his face and could feel the blood running out of his mouth. He was lying on his back and tried to turn over to his side to get rid of the blood and he realized his legs didn’t turn with him.

He knew his back was broken. 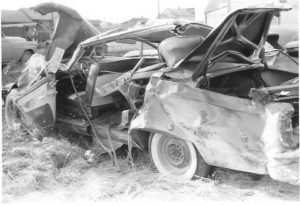 The 1955 Mercury after the accident

Fading in and out of consciousness, it was after midnight when he became aware that two members of the RCMP had found him. Doc told them that he had a broken back and told them not to move him, but to call an ambulance, which they did. The ambulance brought him to the Yorkton Hospital, the doctor on call was Dr. Victor Junek.  Doc told him he needed to be transferred to Regina by Air Ambulance.  The doctor said he didn’t think that Doc could make the trip.

Doc told him that one way or another he needed to go to Regina!

Reluctantly, Dr. Junek agreed and Doc was airlifted to Regina. As he spent a lot of time around the airport, he knew many of the people who worked in and around that field, including the Air Ambulance nurse on duty that day, Irene Sutherland. Irene knew that when you fly over the Qu’Appelle Valley, the plane always drops a little, and Doc knew that too. When this happened on their trip to Regina, Doc was alert enough to tell her exactly that was where they were. And he was right.

Doc was transferred to the Regina General Hospital and taken into surgery.  The orthopedic surgeon assigned to the surgery was Dr. Ralston, an exceptional doctor who split his time between the General and the hospital in Saskatoon, some 175 miles away.

Doc’s back wasn’t just broken: five vertebrae had been smashed. But Ralston knew he might have a chance with a bone graft, and they had a donor, a young fellow who had died in another car accident that day, who’d signed his Universal Donor Card allowing a transplant.

The operation took 14 gruelling hours as Dr. Ralston worked on the donor bone, fashioning it to fit into Doc’s spine. What patience must have been shown by all in the operating room at that time! Now only time would tell what would happen next: if Doc was strong enough to survive his injuries, and if he was, if the bone graft would take and if his broken body could begin to heal.

The hospital called Doc’s next of kin, Hughie and Marcella Gordon, who were living in Wilcox. They were told of Doc’s critical condition, and it was suggested that, as a Catholic, a priest be allowed to administer the final sacrament.

The Last Rites were read. But Doc wasn’t ready to go down, not just yet.