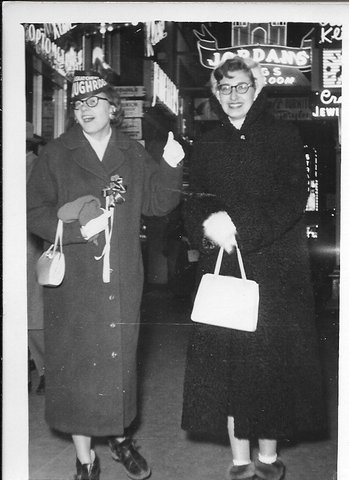 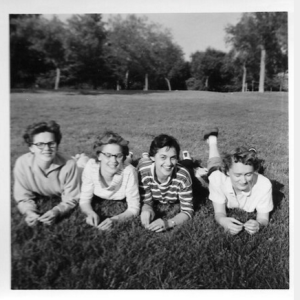 When I first moved to Regina, Saskatchewan, I lived with my sister Marjorie on the third floor of a rooming house. Two other gals, Leah Spicer and Liz Mandryk, lived just below us and the four of us became good friends. We frequently went to Wascana Lake or Central Park in the heat of summer with the suppers we had prepared, to eat and lounge around until the rooming house cooled off, later in the evening. 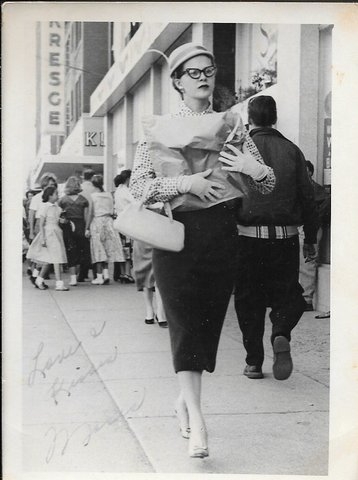 We noticed an apartment block was being built on Hamilton Street, right across from Central Park. Before the walls were up, we put our names on the rental agreement for a two-bedroom apartment the four of us would share. We moved in to this apartment in 1955 and was it ever exciting to furnish it, buying furniture, pots, pans, dishes and linens.

Liz was from Wilcox, just 30 miles south of the city, and Leah was friends with Johnny Weisshaar, a Wilcox boy. John was a friend of Gerald Patrick Merlin O’Shea, commonly known as “Doc”.

On New Year’s Eve, the three of them had been to a party together to ring in 1956 and they’d made plans for the next day too. 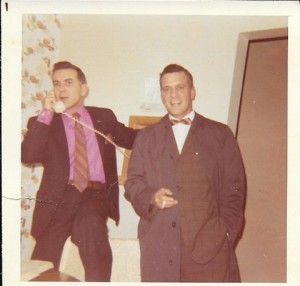 To start out her new year on the right foot, Leah got up early January 1st and went skating at the ice rink across the street.  She must have left the apartment around quarter to eight in the morning, and about 15 minutes later, John and Doc were at our door.

Of course, Leah knew they were coming to pick her up, but she was never one to rush — especially when someone was waiting on her. We chatted with these guys till she finished skating and came home.

Many, many years later, after Doc had died, I found he had written this:

Life
It was a very bright morning on the day that brought the first mark on the calendar for the year of 1956.  The night before had been marked with the celebration of the New Year and had left people a little groggy.  Not so that girl I met for the first time that morning.  She was a spark among a group of coals and was the only person in a room of girls that caught my eye.  In years to come I would love and respect this girl as I had never revered anyone in my life. She would be my wife.

That year, the Saskatchewan Roughriders had made the playoffs. The game to decide who would be representing the Western Division was against the Edmonton Eskimos on Saturday, November 17th. On Friday, the day before the game, word got out and spread like wildfire that there was going to be a special train leaving Regina at midnight and that tickets to the game would be included in the fare.

My sister, Marjorie, wasn’t able to go, even though she was a big fan and we both had season tickets, so I called another one of my friends, Mary Maryniak, to see if she’d like to go with me, and she was keen. Mary was tall, and everyone had nicknames back then. She was known as “Long-Tall-Drink-of-Water-Mary”, her name added to a phrase which meant she was a good-looking girl.

At midnight, we left Regina, headed north and then west towards Edmonton, 735 kilometres away. The Rider Train was already packed with fans, but we stopped in Saskatoon to pick up even more and add some more cars to the train. We didn’t care about the wait. We were too busy partying to notice.

Wasn’t That A Party

And what a party it was!

Everyone had brought their own liquor and beer for the trip, but that didn’t last quite as long as anyone expected. So some of the guys persuaded the engineer to stop the train in Wetaskiwin, Alberta, a strategic stop since the beer store there was scheduled to open as we rolled into town. When we stopped, a bunch of people jumped down from the train and hustled over the tracks and then the highway beyond to the just-opened beer store. With the stock replenished, the party was able to keep going.

People were continually moving from car to car to find friends or meet new ones, and that wasn’t very easy to do. There was no protection from the elements between the cars back then; it was cold out, the wind was blowing, and you had to step on the couplings that held the cars together and those were always moving back in forth. It was dangerous, but thinking about it now, I’d say that danger added to the fun.

It was trying to get between two cars that I met up with Doc.  He recognized me and said, “You’re Mo Stone, aren’t you? I’m Doc O’Shea. I met you with your roommate Leah!”

Of course I remembered Doc. Not only was he the best looking guy I’d ever met, he was someone that was always being talked about, and he had the nicest cars in Regina. Both Liz and Leah knew him well, he was part of the Wilcox crowd, a college town just outside of Regina  Doc invited me to their compartment to have a drink.

Bob and Diane Hilderman, and Cathy Lannen were there, having a drink, and I had one with them. I found out that Doc had driven up to Saskatoon to pick up Cathy, who was studying education at the University of Saskatchewan. He’d left his car at the train station and would pick it up at the end of the weekend.

Later, I found my way back to Mary.

The train arrived in Edmonton around noon, and the party train became part of the party city. Mary and I found a place to eat breakfast, then off we went to the game.

Not only was it a blowout – the Eskimos beat the Riders 51 to 7, but it was windy and snowing and the stadium was next to a gigantic pile of coal. As the wind blew, it picked up the coal dust and covered any exposed skin with a black film that got blacker as the game went on. The entire crowd looked ridiculous.

With the beating we’d taken as Roughrider fans, the train ride back to Regina was rather subdued and most of us were busy sleeping off the party. As soon as I got back home, my roommates told me that Doc O’Shea had called and wanted me to call him back, and that he’d said something about showing me a car I’d like.

My adventures with Doc were about to begin.