Doc had purchased the service station at Winnipeg St. and 11th Avenue from Dave Hilderman in September, 1959. This was rather ambitious of him because although he had a great knowledge of cars he had to find capable mechanics to work in the shop. The first winter was, by far, the worst when it came to the amount of pain that Doc had. It didn’t matter if he was on his feet all day or not, the pain was the same. He often said that it felt like his big toe was exploding. He certainly didn’t want to take any prescription pain killers and the aspirins that he took did little to ease the pain. We weren’t making any money at the service station and finally sold it as the staff was stealing us blind. 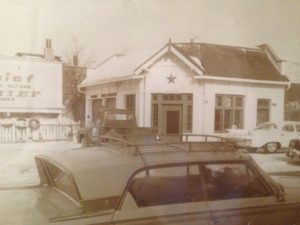 Next, we bought the Sky Chief Texaco service station at the corner of Albert Street and 14th Avenue. We hired Gale Fairman. Gale was handsome and had an athlete’s build, had black straight hair that was brill-creamed like James Dean. He was a super mechanic, but I have never, to this day, met anyone who swore like Gale did. I don’t think he ever spoke a sentence without some swear word in it! “G*d d**m son of a b*tching carburetor…” He could throw a ball peen hammer around like it was nobody’s business, too.

The service station business was taking a toll on Doc’s health. The long days he needed to spend on his feet and the economics being unprofitable led to us selling the station in 1965. I had to take a number of customers to Small Claims Court and those who appeared in court told lie after lie about the service. I don’t think I collected 5% of what was owed. His trips to the Canada Employment Services yielded nothing in job opportunities as it seemed to be that having braces on your legs indicated you had nothing in your brain as well. The last straw was when the counsellor told him that he should apply for “WELFARE” as there was nothing they could do for him.

Well I can remember that day when he came home and told me this as though it was today. All the hard work he had done to recover from the accident and this slap in the face was devastating. This was the norm in those days but we have come a long way since that time to give handicapped persons the opportunities they deserve.

So, he tried a different tack: going back to school. We packed Colleen and Lisa in the car and took Lisa to the baby sitter, Mrs. Diggle. Then he dropped me off at work and took Colleen to school and he went to classes at the University and although he took classes in English and economics too, studying wasn’t his strongest suit. He would pick up Colleen up after school and come and get me and we would get Lisa on our way home.

The next year he started working at the Tire Mart which was owned by one of his friends, Don MacPherson and managed by Ken Miller. Again, the physical nature of the job was taking its toll on Doc, and he started applying for anything and everything he could.

I’m sure he owned a car when he was 16 years old. Doc KNEW CARS. He had an ear for cars. He could tell the make of a car by the sound of it when it was running. If a car wasn’t running smoothly he could tell by listening to it what the problem was, and what needed to be fixed! And other people knew that Doc knew cars too. There was an opening for the manager of the Saskatchewan Government Insurance’s salvage office in Yorkton, and Doc applied for the job, was interviewed, even suggested that he would be given the job. At the end, he was offered a position as a junior clerk in the mailroom of the head office in Regina. 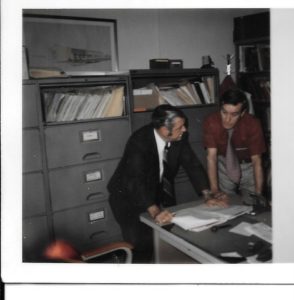 At work in the mailroom

It seemed really strange that he never got the job.  As a car lover he had spent a lot of time around salvage operations, or as most called them in those days, “junk yards”.  It was a routine for Doc to check out these places whenever we travelled.  As I said before, Doc knew cars and he had photographic memory which never stopped amazing me. He saw so much whether it was a picture in a magazine, a car in a yard in a small town as you drove by, anything out of the ordinary or ordinary, he saw it all and remembered where he saw these things.  He had the canny capability of knowing what a broken part should look like when it was fixed!  Despite all his aptitudes, the clerk position was the only offer on the table at that time and, money being too tight to mention, he took the job.

Lois Keilback was Doc’s supervisor at SGI and not too long ago she sent me an e-mail of her memories of Doc. She said, 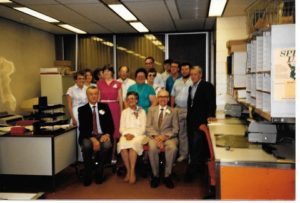 “My lasting memory of Doc was his great sense of humour and quick wit – he always had us laughing. In the early years we made friendly bets on which elevator would arrive first (the cafeteria was on the top floor) – the loser had to buy the coffee. As I recall, we paid a heavy price, ha ha! Then there was his love of cars and machinery. Doc’s mechanical know-how was a great asset when it came to the huge mail inserter – I remember one weekend when he had Murray helping him fix that big Pitney Bowes machine so the renewals could go out in time. 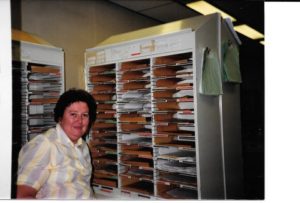 Joan McCallum in the mailroom. Doc actually redesigned the mailroom to make u-shaped cubicles so they could sit on a stool and put a whole bag of mail into all the different cubbyholes without moving around the office.

Doc and Frank were a good team also; we (the mailroom staff and I) respected and depended on their mechanical abilities and leadership to keep the equipment maintained so the mail “could go through”.

Doc was always pitching new ideas to improve or streamline the operation – he was especially big on colour-coding. But his contribution didn’t stop there; he actively stepped up to ensure those ideas or methods (whether his own or those of his co-workers) were successfully implemented. Doc had a willing nature – all you had to do was ask and he was right on it, even if that included the “dreaded” turkey/ham free-for-all that the Union held every December and expected the mailroom staff to look after for them.

His braces never seemed to slow him down and yet I’m sure there were many times when his legs bothered him, but I seldom heard him mention it. There were times, however, that a facial flinch would indicate otherwise.

Whenever I get together with others who also worked with Doc, invariably a happy recollection comes up about him, even after all this time. I guess that really says a lot about the man.

I have one story that I think sums up Doc’s quick wit. He had brought some cookies to work (he may have baked them himself). Anyway, someone discovered a hair in one and pointed it out. His response: “Well, what do you use to hold your cookies together?”

Doc never complained about work or his leg aching. He went to work so he could come home and when he got off work at 4:45 p.m. you could see the Mini come up the driveway at 5:00 p.m. There were very few days that he missed work in the 19 years he worked at SGI. He said that he may as well be at work the pain wouldn’t lessen by being at home.”