Before Doc left for Norquay that fateful morning on April 24, 1958, he and I had decided that at the end of May, we’d both take holidays, drive out to Vancouver, and get married. When Hughie and Marcella Gordon, his next-of-kin, learned of Doc having been in the accident and close to death, they called Kathy Lannen. Kathy wasn’t his girlfriend any more, but they didn’t know that. They thought that Kathy was still Doc’s girl.

Kathy was known as “The Queen“, or Queenie, and I’d met her before: she was with Doc when I ran into him on the Rider Train to Edmonton in 1956.  The Gordon’s had called her, and she rushed down from Saskatoon where she’d been studying and despite his being in critical condition with no visitors allowed, she was one of the first to get in to see him. 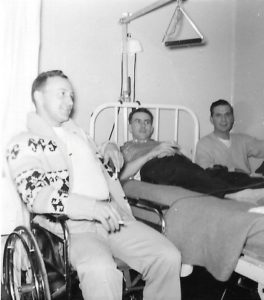 As for me, it was one of his Co-op Refinery friends, Bobby Galloway, who told me what had happened to Doc. When I was finally allowed in to see him, Queenie was there, reading to him.

Doc was unrecognizable, bandaged from head to toe, with slits for his eyes, nose and mouth, on a Stryker bed turned every 12 hours to help stave off bed sores. The Stryker bed was also important to keep his back straight to enable the bone graft to heal. He was getting heroin intravenously to try to keep the pain at bay. By this time, word was out that Doc was in bad shape, and a stream of friends juggled turns trying to see him, to try to talk to him when he was awake, to give him some words of encouragement that he was not just going to live, but have a full recovery. The pictures on this page are from later in his recovery.

Both of those sentiments were doubtful, at least through the first six months he was in the Regina General Hospital. 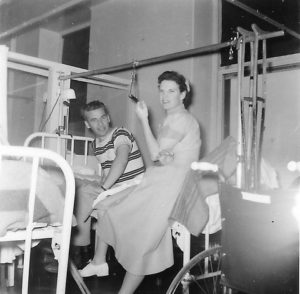 As for Queenie, I couldn’t be jealous of her, she, like the rest of his friends was just trying to give him hope and courage. No one had any idea of what the future was going to hold, or if Doc would be a part of it.  In fact, nobody was talking about the future, only hoping for the best for Doc, day by day. I knew that I loved him before the accident, but it was hard to know how I now felt.  We were all wondering what was going to become of Doc: was he going to ever get out of the hospital? Would the bone graft give him problems? Would he ever walk again?

I was going to work every day and, as I wrote before, life was good working for Imperial Oil Limited. I looked at the possibility that my life wasn’t necessarily going to be with Doc. I started dating again and yet there was a magnet pulling me to the hospital many days of the week when I finished work. Doc was always so happy to see me and most interested in my “friends” and we talked about who I was seeing and what I was up to! If I went to a movie, BBQ, picnic, bowling, or any company outing he wanted to hear about it. We talked about everything from city to province to country affairs. And we became good friends. Doc was the best friend I ever had!  Doc was a good friend to many.  There was no ulterior motive with Doc.  it was his “got to stand for something or you’ll fall for anything” attitude that impressed me.  He was a compassionate man, loved dogs, would stop and help anyone with car trouble kind of guy and completely honest.

Years later, I was told that the nursing staff at the Regina General Hospital often talked about Doc and the two women who visited him. Some felt that Queenie would be best for him, others thought that I was definitely his girl.

Soon, summer was winding down and Queenie was off to a teaching job somewhere outside of Regina. 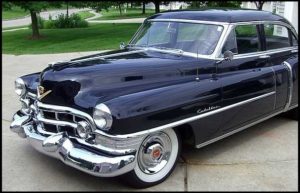 Doc read the Leader Post, Regina’s newspaper, every day.  Of course, he was always looking in the Used Cars section in the classifieds and by September, he began looking for a car as a motivator to help get him out of the hospital.  He saw an ad listing a 1952 Cadillac in the paper. It was a small ad, “1952 Cadillac, navy blue, 29,000 miles. Call now…”  and that was all.

He wheeled over to the nurses station and used that phone to call that number. A lady answered the phone. Doc asked if the car really had only 29,000 miles on it.  The lady said, “It has only 28,834 miles on it but they said to say 29,000 when I placed the ad.” 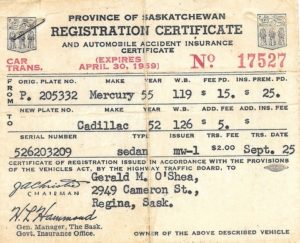 The Certificate of Registration of the 1952 Cadillac

Doc said, “I’ll buy it.  May I come by to see it? and what is your address.”  She said that would be fine and gave him the address.

Doc promptly phoned Bobby Galloway and asked him to come and take him to see the car, and he did. Doc bought it on the spot and started figuring out how he would put hand controls into the car so he could drive it.  As it turned out with the car being an automatic he didn’t need hand controls!

A major setback happened just before Christmas that year. The accident write up in the April 29th Leader Post had said he’d broken his back and had damage to his kidneys, and that damage was complicated with him being on the Stryker bed for so long. Doc was turned sideways but was never upright, and with an increased calcium intake to assist the bone graft, it was an open invitation for kidney stones.

One of the ward aids, a woman named Marion Reece, made quite the scene. Despite all her efforts, she wasn’t able to cool Doc off, and she began yelling and screaming at the doctors, telling them that he would die if they didn’t get him into surgery right away!  Of course no one wanted to do surgery on Christmas Day, but they did and that, likely, saved his life again.