Growing up on the farm meant we had good food. Beef, pork, chickens and sometimes turkey if the coyotes didn’t raid the chicken coop. We had our own milking cows so we had milk and cream.  We had an ice cream maker and sometimes in the summer we would make ice cream.  We crushed ice from our ice house to use in the process and often you had to hand crank for a long time before the cream turned to ice cream! It tasted sooooo good, even better than bought ice cream.  And I remember there were times that I got to lick the beaters!

We had fresh vegetables from the garden in the summer. The first radishes out of the garden were sliced and added to a sandwich or added with green onions into a potato salad, and deeper root vegetables were dug up in the fall for eating during the winter months. 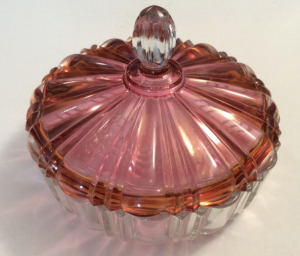 Peppermints anyone? My mother’s peppermint dish.

Perhaps my Dad was a bit “chicken” (pardon the pun) or lazy – or maybe he just didn’t have the stomach for the job: it was Mamma that went out to the chicken coop on Sunday mornings and beheaded the chicken to roast for dinner that night.  In my mind’s eye, I can still see the poor bird running around in the yard in till it’s heart stopped beating. Mamma always made stuffing for the chicken with bread, onions, butter, poultry seasoning and celery.  This (only in a larger quantity) same stuffing was made for the turkey dinners at Thanksgiving and Christmas.  We had wild gooseberries in the coulee next to the house and the pudding Mamma made with these berries was absolutely delicious and remember her puddings as one of the best I have ever eaten.  I have said it before but I will say it again. Mamma made the best bread: brown, white and rolled-out bread and her beef ribs were the most tender I have ever eaten. Peppermints were the only candies I remember having occasionally at home although after my Dad died my Mom always had them as a treat for her grandchildren!

I have always liked egg salad sandwiches. Back in 1956 I first tasted these sandwiches on a golf course. This was at the Lobstick Tournament in Prince Albert National Park at Waskesiu, SK.  This course has a snack shack between the ninth and tenth holes: the ninth hole does not end up at the clubhouse so once you are out on the course you are there for all 18 holes and that’s why there is a snack shack.  Now their egg salad sandwich on brown bread was so loaded that the egg was leaking out on the sides.  So yummy.  All the years of my life I have compared egg salad sandwiches on the many golf courses I have played.  But the benchmark started in 1956!

The Willows Golf Club in Saskatoon, SK has a snack bar as well.  The first — and best — breakfast sandwich I have eaten was here before we teed off one morning.  It was made while we waited and was a modified Denver (often called a Western).  It was on a toasted large croissant and more like scrambled eggs with onions and small pieces of ham. The eggs were just past the runny side and so delicious you wanted more! 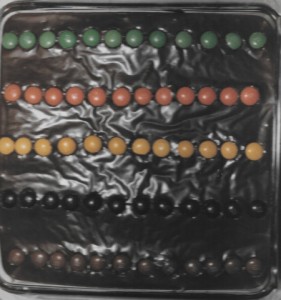 I do like chocolate cake.  We make one in our family with a recipe I inherited from a certain Mrs. Butler of Indian Head, SK. Apparently some call it Mrs. O’Shea’s Chocolate Cake now. Anyways, it’s a one bowl cake and a favourite for each birthday in my family.

When I first came to Regina there was a small cafe on the south side of 11th Avenue, west of Lorne Street, that made a chocolate cake of note.  This cafe had about eight stools at the counter and maybe four small tables along the side. You actually had to sneak out of work at 11:45 am to get a seat or even cake to go because any later, you’d be out of luck. The cake was three layers deep and had chocolate icing between the layers and on top.  A piece of this cake (cut like a piece of pie and 3.5″ wide) was sold for $.25.  It was soooo good.

The National Bakery on Scarth Street in Regina was the last stop on  a Satuday afternoon after shopping downtown.  Not only was it for our supply of bread and buns but for tarts too: butter tarts and melt-in-your-mouth lemon tarts.  Sometimes they would give you a tart as a sample and you would savour the flavour all the way home.

Butter tarts were a highlight of golfing at the Murray Golf Course in Regina.  These were baked on site every morning and I never passed from the 9th to the 10th hole without stopping for one or two tarts. Cinnamon buns, baked fresh every morning, were a tasty treat at the Tor Hill Golf Course.

Breakfast by Val at Shadow Mountain, Cranbrook, BC is my idea of a great breakfast.  Val would come in early every morning and boil the potatoes.  Then she would pan fry them in olive oil with a little butter and green onions.  Crisp bacon was served with my two easy-over eggs, whole wheat toast, orange slices and coffee. And the breakfast at the Wynn in Las Vegas is high in quality and certainly not a gamble. Excellent omelettes, hash browns, toast and coffee — and exemplary service.

Some of the places of great dining experiences were:

Not to be left out are the following:  Christmas Eve dinner at the Flemings, Friday Night Steak Night with Guy at the BBQ, Soup for lunch at Colleen’s kitchen, Any dinner at Dorothy’s at the farm or in Saskatoon, BBQ’s or Christmas Dinners at Bridget’s and my Birthday Breakfast at the Lady Bug Cafe in Aspen Woods, Calgary AB. 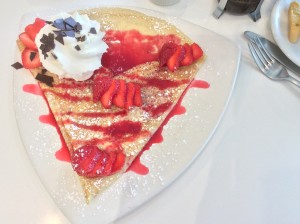 There are so many other members of my family and

friends who have so graciously invited me to their homes for delicious dinners over the past years.  I have been to picnics, BBQ’s, pizza nights and enjoyed not only good food but great company.  And a Lemon Hart Rum with Coke occasionally!