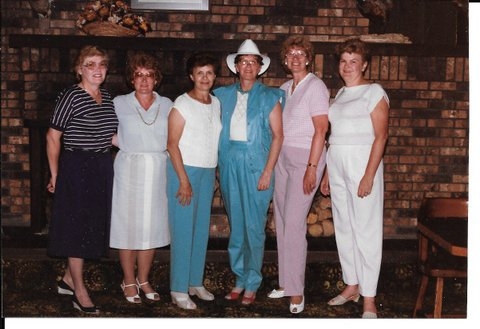 These are six golfers from Regina the first time we played the Lady Bug Tournament in Minot, ND, in 1985.

It must have been word of mouth that I found out about the Lady Bug Open in Minot, North Dakota. It would be held the first weekend in June, 1985 and I wanted to play in it. 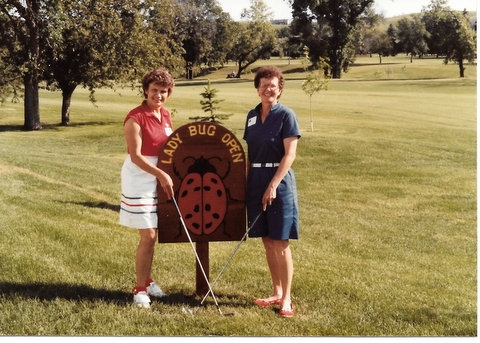 I called the Minot Country Club, as it was called at the time, to ask about entering and was directed to a woman named Mary Maloney who knew everything I could ask about the tournament.  It was going to be a two day, two-person net and it nearly sounded too good to be true.  The $50.00 entry fee covered the golf, two breakfasts, two banquets — and prizes!  And if we signed up for it, we also had the option to play a practise round the day before the tournament started – at a nominal rate. 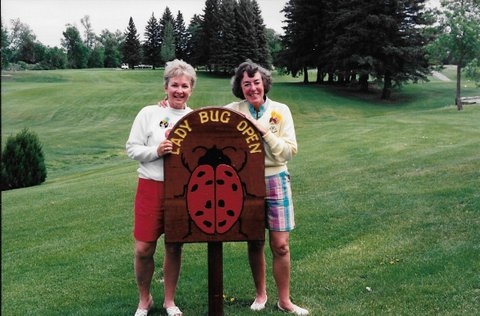 My best friend June Hudyma and I soon had willing partners.  She would golf with Fran Yacheson and my parter would be Adele Obrigewitsch and it wasn’t hard to put a couple of teams together. Minot is the closest US shopping centre for us Regina women who loved to go “across the line” to shop. They had a marketing campaign called “Why Not, Minot?” which was rather catchy, but I didn’t need that slogan to lure me south. I loved Minot.

In fact, I’d been going there with my family since 1959. My husband Doc and I even spent our honeymoon there. It wasn’t so much that we were bargain shopping, although everything was always cheaper than in Canada, but we could find different things in the USA that you didn’t have in Canada back then. And I like shopping. I can say that I have always had an adrenalin rush walking into a shopping centre that is new to me or one I have not been to for ages.

So the four of us women packed up my station wagon with golf clubs and a few light suitcases with extra room for our purchases! and headed out for a “girls extra long weekend” of golf and fun. Now I like to get up with the birds, and the best road trips begin no later than 6:00 in the morning, so off we were on our four hour drive. We had thermoses and muffins and just between Weyburn and Estevan – nearly two hours into our drive, we made a stop at Nickle Lake Regional Park, just off of Highway 39 for a little breakfast snack. One year, Birdie Prosofski (nee Fletcher) brought along some brandy to go in our morning coffee, and we all laughed and shook our heads when she pulled that out! Now you might not believe this, but Birdie came from a golf family: her father had been the Head Pro at the Wascana Golf & Country Club and called his boys Dormie and Par. Par Fletcher was the first (and still the only) Canadian to win the Canadian Open, in 1954. 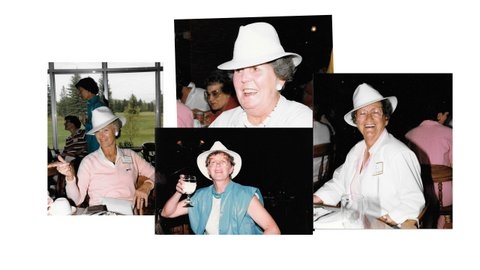 Just a few of the gals that wanted to pose with MY hat.

We had booked a tee time for our practise round and had time to go to the mall before the registration and welcome banquet that night.  At the mall, I saw a white hat in the window of menswear store. I tried it on and was surprised that I fit me perfectly. I have a small head and most ladies’ hats are much too large for me. I loved this hat, bought it and left the store wearing it!  At the banquet that nigh,t everyone at our table took turns trying it on as you can see by some of the pictures I took of the models!

The golf course was in excellent shape every year that we played in the tournament.  The maintenance crew had done everything to make the course beautiful with flowers blooming in all the flower beds.  This was pretty special as this was just the first weekend in June, so very early in the season for a golf course that far north.  You couldn’t have wished for better food from the breakfasts, lunches and two delicious banquets either. 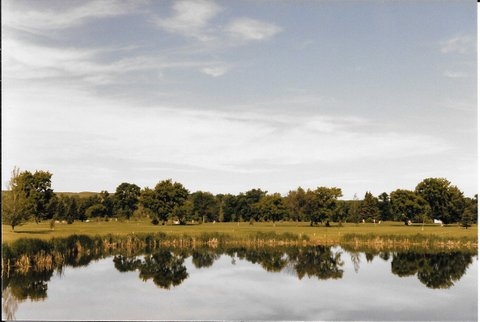 Minot Golf Club in 1985. The picture is faded, but believe me those fairways were very green and beautiful.

We also had a lot of fun every trip and no problems getting through customs to get back into Canada. The first time we came back, the border guard asked us what we won? Not really understanding his meaning, I asked, “Do you mean, “What do we have to declare?”

We told him we didn’t, even though we played well. “Have a nice trip home, ladies,” he told us. 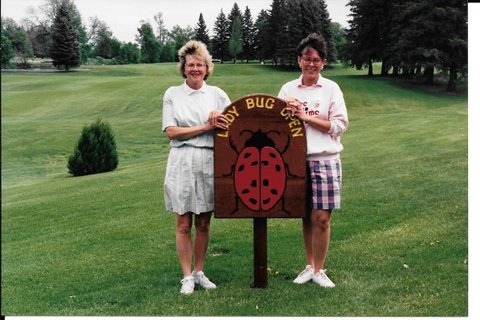 Lee Frank was my partner for the other years we played in the tournament. In 1987, we were tied for first after Day One but couldn’t hold the lead and finished tied for third. 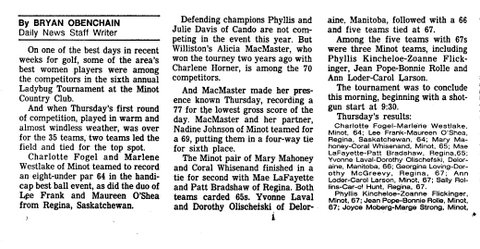 The Souris River flood in 2011 put an end to the tournament. The flood was devastating to not just the golf course but much of the city of Minot.  For the Club, many of their trees were lost, as well as part of the clubhouse. When it reopened in 2013, it was rebranded as the Vardon Golf Club, named in honour of the course’s original architect who had designed the course in 1929, Tom Vardon, the brother of 6-time Open champion Harry Vardon.

Right now I don’t know if anyone runs a tournament for women as well as the Minot Golf Club ran the “Lady Bug”. One thing’s for sure: I would love to play in it again.

Now isn’t the Internet wonderful? I’d been thinking about the fun times we women had playing together when I lived in Regina, golfing out of The Murray, or Tor Hill. It got me thinking about Adele, and I realized she wasn’t one of my friends on Facebook. I tracked her down and she’s still golfing and last night, we spent over an hour talking together. I think we’ll make plans for a round or two in 2016.