I have been back to play the Tor Hill Golf Course several times since I moved from Regina to Calgary in 1998. Whenever I return, I’m usually on my own and call up my golfing friends that I had not seen for a while to see if we can play a round together. Whenever we do that, of course, there is visiting and catching-up to do on news and events as well as the golfing. July 13, 2015 was different. Now I wasn’t alone. I was with my friend, Ruth, and we had been on a road trip together for the past five days, so we were pretty talked out. Tor Hill would be all about golf!

Tor Hill, one of the City of Regina’s municipal courses, was my home course for years. It’s the course my golfing skills grew up on, it’s the first one I learned a golf course has its own special nuances, and learned them like the back of my hand. When I played it a couple of weeks ago, however, I saw the golf course, in some ways, as though I had never played it before. Yet it also was like an old friend that I knew well so there were no surprises. Scott Knapp, the longtime CPGA golf professional and a good friend of mine met me and Ruth and told us we’d be playing North and then West – the original 18 of what is now the 27-hole Tor Hill Golf Course. 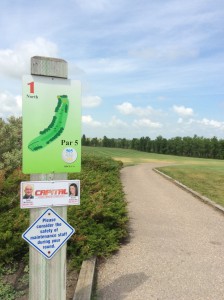 The first thing that really struck me was the forward tee boxes on the North course’s hole number one. Designed by the famous golf course architect, Stanley Thompson, now that I’ve had the opportunity of playing several Thompson-designed courses, it’s almost shocking at how isolated the forward tee-boxes are. Thompson may have thought the forward tees were for women only and not all that many women were playing golf back in 1928 when he drew up the plans for Tor Hill, but in typical Thompson fashion, the forward tee boxes are placed far to the edge of the fairway and mostly on the right-hand side.

That first hole, North #1 – again, like so many Stanley Thompson-designed courses, is a Par 5 and is a dogleg to the left. Straight ahead is a fairway bunker (that I have been in many times!) and just seeing it from the tee box reminded me of what the sand would feel like under my spikes if my ball landed in there again.

Once I got to the first green, too, it brought back so many memories! I could imagine putting from every part of this green.

Driving the cart through the trees to North #2, I could remember right away the familiar smell of the trees and underbrush as though I had been there just yesterday. One summer I remember we had a snowy owl nested in the trees and she brought tiny snowy owlets into the world. It always made me smile as we would quietly drive past. 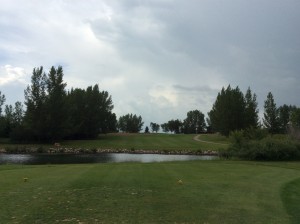 The 3rd hold is a Par 4 that has trees all along the out-of-bounds right side. I looked over there and remembered many errant shots to the right and promptly put my drive out to the left!

My favourite hole on the entire course is the North #4, a 170-yard Par 3. You need to drive the ball over cattails and water to an uphill green, which usually takes a 3-wood for me. Oh, the memories of this hole! Once I was in the water on the right side and about 12″ from the grass. This is the only time I have taken off my shoes and hit the ball out of the water. It took me two tries, though, as I had no idea how hard you had to swing to get the club through the water! The second try I hit it out. I am always up for a challenge! 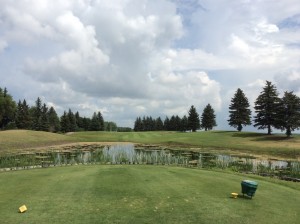 North #5 is a Par 4. One memory I have was one very windy day I hit my drive, down wind, 255 yards, one of my longest drives ever.

The 6th hole is another Par 4 with the forward tees WAY off to the right. A straight drive from this tee box could end up in the bunker on the left side of the fairway. There is a valley between the tee box and that bunker and a slight fade is the optimum shot.

North #7 is a Par 5 from a left-side tee box with a small vale right in front. A good drive is between the bunker on the left and the one on the far right. The second shot needs to thread the needle between bunkers on the right and trees on the left. The green slopes toward the fairway.

North #8 is a Par 3 that has a large bunker on the left side, another large bunker back right and trees all the way up the right side. There is a very narrow path to the green. The tee box is slightly elevated to a small valley below that leads up to the green.

West #1, Par 4 is a dogleg to the right. There are trees all the way to the 150 yard marker on the right side and many an errant ball of mine has been in those trees. Sometimes you can advance the ball through the trees to the fairway. The fairway runs down from 150 yards and slopes to the left.  Bunkers surround the slightly elevated green.

#2, Par 4  is a dogleg to the left. There is a pond at the inside corner of the dogleg and if you are brave, you can go over this point to the fairway and have a short iron to the green. A good drive puts you inside the 150 marker on the fairway. A 3- or 5-Wood can get your ball up onto the elevated green. 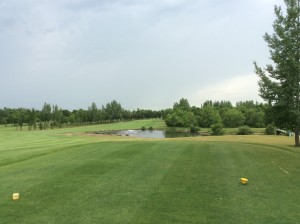 West #4 Over the pond

#3, Par 3 is over the same pond as the 2nd hole. The water is right in front of the tee box and the green is uphill. A bunker is green side to the left of center.

#4, Par 4  In order to have a short shot to the green, you need to go over the pond again. One time I hit my tee shot so far to the left that it was on the 5th fairway. Not only was it on the fairway but it was in the middle of the fairway! None of this, “the first thing to do is get it back in play” for me. I took my 5 Wood and laid it down on the grass to see if I had enough loft to go over the big trees between the 4h and 5th holes. Sure enough, I can clear the trees if I hit it right. I took a couple of practice swings and not only did I clear the trees but I put it on the 4th green. The green has bunkers on both sides and is slightly uphill from the fairway.

#5, a Par 4, is uphill all the way with no fairway bunkers and is as straight as an arrow. One green-side bunker on the right is often in play, but the bunker on the left is not close to the green.

The 6th is a Par 4 and is another straight hole. There’s one bunker on the right-hand side of the green, but it really should not come into play. This hole plays a bit downhill all the way.

#7, Par 4 – About 20 years ago, a friend of mine named Mae hit her second shot with her driver on the fairway and she hit it right up and on the green. I had never seen anyone do this before and I was amazed and had to try it out and the truth is sometimes it actually works! This green is well bunkered, front and sides and I have hit it in them all. Sometimes it is best to go long right over the bunker in the front of the green.

#8 is a Par 3 of 145 yards with bunkers on both sides of the green. So many times I have been inches away from a hole in one on this hole, but I’ve never made it in in one. I’ve been 3 inches below, 5 inches above, 2 inches to the side. I have never had much luck on this hole!

Number 9 West is a Par 4. When I was a member at Tor Hill, my friend June and I would often end up playing this hole in the dark. We would be trying to squeeze in 18 holes after work, which was always a challenge, especially at the beginning of the season when the days were still short, or at the end, when the darkness would creep in again! I always think of those days with fondness whenever I play this hole. A bunker up the right side and an uphill green makes for a great finishing hole.

There are now 27 holes of golf at Tor Hill which includes the East Nine.  These additional nine holes were developed after I moved from Regina.  I have not played the East Course many times and prefer what was the original 18.

I had such great memories playing the course and it seemed like every shot I made I had made one from there before. I loved every minute of our game (except we were quite afraid of the thunderstorm nearby) and although I did not score all that well I was so happy I had the chance to play. The first time I ever shot an 80 on this course, I had a 9 on the first hole – a lesson that adversity can be overcome, even on the golf course, with a poor start. With no storm around I likely could have played better but an 84 was a good score that day. Thanks to Ruth for forging on with me with the dark clouds all around us.