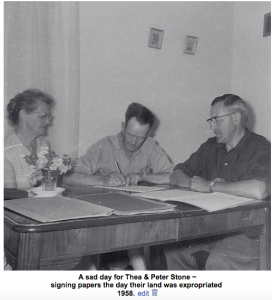 These days, most people have heard of Gardiner Dam and Lake Diefenbaker. Gardiner Dam is one of the largest embankment dams in the world and our family is a sidebar in the history of this Saskatchewan dam.

My Mom and Dad, Thea and Peter Stone, first heard that a dam might be built on the river that neighboured their land, the South Saskatchewan River, as far back as 1943. That’s when a group of PFRA surveyors arrived at their farm and told them that their land might be needed if a dam was going to be built.

Although it took another 15 years until the building of the dam became official, some of my parents’ land, including their farm’s home quarter, was, indeed, needed for the construction to go ahead.

As far back as 1882 there had been talk about damming the South Saskatchewan River. Irish explorer and geographer, John Palliser, although he thought the Canadian prairies was a desert and unsuitable for settlement, nevertheless envisioned a dam on the river for navigational purposes.

After the suffering and the drought of the “thirties”, the Saskatchewan and Canadian governments started looking at ways to secure water for the inhabitants of the province. The idea was to use the water in the fast-flowing South Saskatchewan – instead of just letting it join the North Saskatchewan river further upstream.

Harnessing the waters of the South Saskatchewan for irrigation

At the tail-end of the 1930’s came WWII and when that was finally over, the focus could turn, once again, to internal Canadian matters. In 1946 a group of men started the Saskatchewan River Development Association to promote irrigation for farmland, but it wasn’t until July 25, 1958 that they were in attendance when an agreement was signed by Prime Minister John Diefenbaker and the acting Minister of Agriculture, Douglas Harkness, which gave the go-ahead to build the dam. The cost of the build was to be shared between the Federal and Provincial governments, with 75% being paid for by the feds and the rest of the estimated $182,000,000 price tag being footed by the Province of Saskatchewan.

There were 20,000 people at the ground breaking ceremony for the dam on the South Saskatchewan River.

In 1959, the Saskatoon Star Phoenix ran the following article:

“A dream of farmer, Peter Stone and other farmers in south Saskatchewan since early days of the territory will soon become a reality with construction of a huge earth filled dam on the South Saskatchewan River between the towns of Elbow and Outlook, and an auxiliary dam in the divide between the Qu’Appelle Valley and Aiktow Creek.

First of the area’s citizens to be affected by the new development is Peter Stone, whose farm on the east bank of the South Saskatchewan has been reduced by 540 acres with the purchase of that amount of land by the Prairie Farm Rehabilitation Administration, under which the project will be constructed.

Looking back over the 53 years he has farmed in Saskatchewan, Stone says, “If irrigation had come earlier, it would have made a tremendous difference. In 1937 I didn’t thresh a bushel of wheat,” he says, “and other years in the 1920’s were almost total failures, too. With irrigation we’d have been able to raise crops and to run double, perhaps triple the number of cattle it is now possible to raise.”

“We’ve farmed here for 53 years and it kind of hurts to leave the place. We won’t move far, but will probably build a home on my son Gordon’s farm nearby. We’ll be inside the construction area so we’ll be watching the project with keen interest in the years to come.”

Mamma and Daddy didn’t build a new house but opted to have their house relocated to the yard where my brother Gordon had his farm. Mamma actually rode in the house while it was being moved by the movers and she loved her new location, with windows facing south and a big garden out in front.

It was a busy time in our neighbourhood: a village called “Cutbank” was constructed by the PFRA with houses for the workers a couple of miles further west of my brother Gordon’s farm, and huge earth moving machines, bigger than anyone had ever seen, moved into the area to work on the construction of the dam, the spillway, the control towers and the Coteau Creek Power Station. 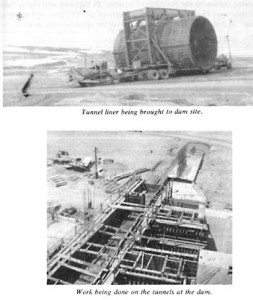 My daddy never got to see the completed project. He died in December, 1966.

The dam was finished in 1967 and was named the Gardiner Dam. The reservoir that was created by the dam is called Lake Diefenbaker and the park on the east side of the lake is called Danielson Provincial Park.

All three of the above are named for prominent Saskatchewan men who were instrumental in getting the dam created. Herman Danielson was a Saskatchewan Liberal Party MLA, James Gardiner was a former Premier of Saskatchewan and a long time Member of Parliament and Federal cabinet minister and John G. Diefenbaker was the Prime Minister of Canada from 1957 to 1963.

“The project is to provide facilities for the irrigation of approximately 500,000 acres of land in central Saskatchewan and in the Qu’Appelle Valley and to provide other benefits to the area including a source of hydroelectric power, a source of rural and urban water supply, flood control and recreation facilities.” (Appendix A, July 25, 1958 Memorandum of Agreement) 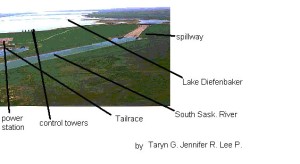 To date only about 100,000 acres are being irrigated however there are plans to add more acres in the future. The expansion entails building smaller dams downstream to facilitate more irrigation. 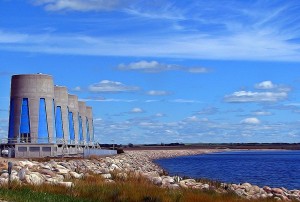 There were many positives with the building of the dam. Both my brothers Gordon and Gerald were able to have employment with the completed project.  How convenient to live on your farm and work within three miles of home?

On July 21, 1967, Lester B. Pearson, Prime Minister of Canada was at the ribbon-cutting ceremonies to officially announce that, “The dam is open!”

Well that’s  not exactly what he said.  In fact he said that the Gardiner Dam was finished and then he cut the ribbon to mark the occasion. 🙂