As soon as I got up yesterday morning, I had the funny feeling that it was a special day for some reason, but I couldn’t quite remember what. 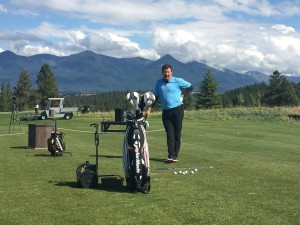 Then, when I opened up my Twitter account (I’m @sevenpars) I found that The Wilderness Club is now following me — and that’s when the penny dropped.

Today’s the day that Sir Nick Faldo, golf course creator, PGA star, television analyst, winner of 6 majors including three Masters jackets, junior mentor – and more – would be putting on a golf clinic at The Wilderness Club, the course he designed in Eureka, Montana. When my friend Ruth and I were on our latest road trip down there last week, we ended up having a “stay and play” at The Wilderness Club, and we loved it there. It was the first time I’d ever golfed on a Faldo-designed course, and I’ve got to say the course design is really top notch! Well done, Sir Nick!

When we got to Eureka, everyone we met was so excited: they’d just got word that Nick Faldo would be coming the next week, and they were starting to send out messages to let people know. I guess Ruth and I were just a little bit too early with our Montana road trip, because we would have loved to be there for the clinic. 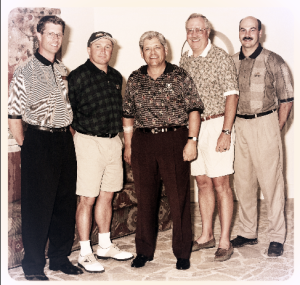 Having a famous playing professional put on a clinic is very special. I know. I was at a clinic that Lee Trevino put on June 16, 1997 at the Willows Golf and Country Club in Saskatoon, Saskatchewan.

Wade Hudyma, the son of my friends June and Wally, was the Head Professional at the Willows at the time. Talk about the grapevine! Wade told his mom – one of my best buddies and golf partners – she told me, and the two of us started making plans. Both of us lived two hours from Saskatoon, so we’d need to make a road trip if we were going to get to see Lee Trevino in person.

The clinic was in support of in support of the Air Sask Children’s Charities Golf Tour, and the organizers were bringing both Lee and country music star Kenny Rogers up to Saskatoon at the same time. Lee would be performing during the day, and Kenny would be singing that night. 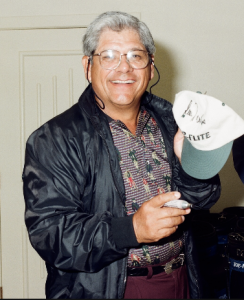 Lee Trevino autographing a cap at The Willows

For the clinic, Lee would be playing with four golfers on each of the 18 holes, so he’d play with a total of 72 golfers.  These golfers would have paid a lot of money for the privilege of playing one hole with him… I believe there was an auction held in advance to determine who got to play.

June and I weren’t part of the 72 golfers; we were just there to follow him around the course.

It was a beautiful, sunny morning and Lee started off with a hitting display and a little entertainment for the crowd on the first hole of the Xena nine.  We watched in amazement at how far he could hit the ball off the tee — and even more amazing how far he hit his 3-wood off the deck.

And that was nothing.

Then, he stepped on a ball (with great apologies to the ground crew who would have to repair the hole on the tee box) so the top of the ball was just peeking out a little bit. Then he hit this plugged ball just as well as the ones he had hit off the deck!. And he never stopped talking when he was hitting!

This, he explained, was proof positive why you need to hit down and through the ball to get it airborne and make it fly. We were impressed.

One of the club’s junior golfers had been selected to act as Lee’s caddy, and, as the course’s head professional, Wade was designated as Lee’s guide, walking alongside of him, giving him yardages and keeping track of each of the foursomes. Wade told me years later that it was one of the most fun afternoons he’d spent as a pro, especially because he got to listen as Lee talked to all the golfers he met that day.  Now, as you probably know, Lee Trevino isn’t known for keeping quiet on the course, and he’s renowned for his sense of humour! Always entertaining, we could see Wade and Lee laughing as they walked the fairways.

Wade told me they were on the 16th hole and Lee was ready to make his second shot, but he asked Wade to not give him the yardage to the hole.  Lee said, “it looks like one hundred yards” and Wade looked down at his chart and, sure enough, the distance was 98 yards!  That’s how good these pro’s are from all the practise they have done!

I remember that somewhere around the 17th hole, it started to rain – and rain wasn’t in the forecast.  Wade didn’t have a rain jacket with him – he was wearing golf clothes, of course, but all he had with him was a clipboard!  Lee dug into his bag and pulled out TWO rain jackets and gave one to Wade to wear. “I always keep a couple with me, just in case.” 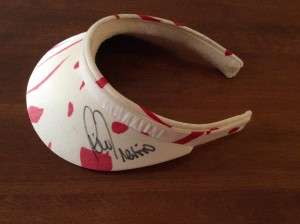 What a fun day we had and I still have the visor that Lee Trevino signed!

Wade is now the General Manager at the Royal Mayfair Golf and Country Club in Edmonton, Alberta, a job he’s held since 2010. The club has played host twice to the LPGA’s CN Canadian Women’s Open as well as a variety of high-level amateur events.

As for Lee Trevino, at 75 he’s now retired from playing golf professionally, but snippets from his great sense of humour is a daily staple in the golf world. Like his comment about being caught in a lightning storm. When asked what he’d do, Trevino quipped that he’d hold up a 1-iron “because even God can’t hit a 1-iron!” A bit of golf humour at its best.

I’d like to give a shout out to some of the people who helped me put this story together. Adam Long, the Director of Golf for The Wilderness Club who sent me the pictures he’d taken and given me permission to use them; Guy Beatty, the General Manager of The Willows, who tracked down pictures of when Lee Trevino put on the clinic there, and Wade Hudyma, of course, whose memories of a day with Lee Trevino helped make this story great! And, last but not least, my daughter, Colleen O’Shea, for being the great editor she is and putting all of this together.