After Gordon came Edna.  Her early years of school would have been at Stafford, a mile-and-a-half from home.  I believe she attended high school at the Wheat Plains School and when she finished high school, she went to Saskatoon to the Normal School to become a teacher. 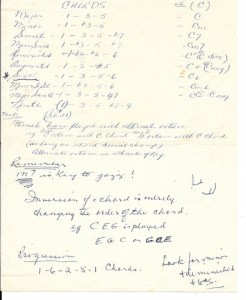 Edna’s instructions on how music works

And what an excellent teacher she was. Her expertise in mathematics and music were second to none. She was very gifted musically and could play any song, that was hummed, on the piano. I’m sure she could have won “Name That Tune” quicker than anyone. And she could read sheet music as well as being able to play by ear. What you see on the left is how Edna explained music to me – majors, minors — if you know anything about music, you can see how clever this is. It’s the basics of music, on one small piece of notepaper.

Growing up in a family that was always listening  to music on the radio and singing songs made it easy for Edna to love to entertain. The names of the country schools she taught at are intriguing: Happy Hallow, Glen Uig, Rose Brae and Garden Valley. The towns where she taught were the three H’s:  Hawarden, Hughton and Herbert.

Edna then moved to Calgary and for some time taught classes to handicapped students.  Then she taught high school at Sherwood, David Thompson and Sunalta.  After school, she tutored students and taught music.  What  a busy woman. 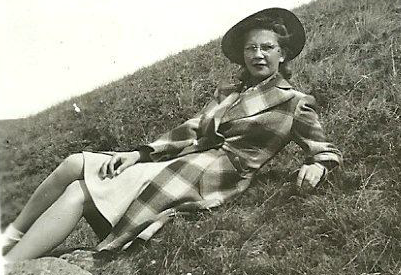 Edna Stone, Chillin’ on a hill

When Edna taught at Hughton she was living in the town of Elrose, several miles away.  She asked my brother Jim if he would come and live with her while he completed Grade 11.  The agreement was that he could stay with them free for doing the driving.  The road to Hughton was a gravel highway then and when it rained the gumbo was almost impassable.  Despite his inexperience, they made it to school and home every day.

Back to the basics of mathematics

Since math came so easily to her, she looked over Jim’s shoulders to see how he was doing. Jim would be the first to say that without her help and encouragement, he would not have finished high school or gone to university.  She realized by looking at his work that he had no foundation in mathematics despite having passed Grade 10.

You’ll have to take Grade 10 again. 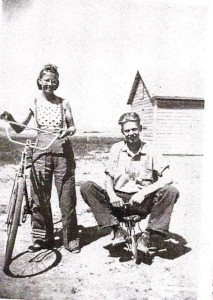 Edna and Gerald having fun!

And so he did. She had him start at the beginning of Grade 10 mathematics and completed both Grades 10 and 11 in the same year.  He said that the marks he got that year – Algebra 92, Geometry 100 – says a lot about her teaching skills.

One of Edna’s skills as a teacher was to encourage the students to seek his (her) own approach to problem solving, not necessarily to follow the book.  Jim said this got him into trouble the following year at Strongfield with Earl Kyle (the Principal and high school teacher) when he insisted that his solution to math problems were valid.  A valuable lesson was learned in humility and human relations to preface his suggestions with, “Mr. Kyle, could this be a solution?” 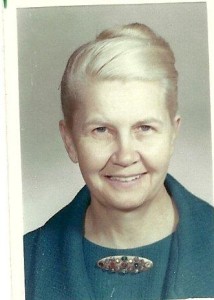 Edna as a teacher

Edna was also a very creative woman, but her innate perfectionism sometimes got in the way.  I remember her coming home on weekends, always having a project on the go. Once she’d been to Saskatoon and had bought material to make a dress. Even though she tried, there was something wrong between the way she’d envisioned it and how it was turning out. At the end, the dress was a disaster and she abandoned that project in frustration.  But the following weekend home, she’d begin on another sewing project which also might (or might not) be abandoned.  But all you’d have to do is ask and she would bake beautiful buns — and while the buns were in the oven she would sit down and play the piano and you could sing along.

Edna changed careers and started selling real estate.  I remember her coming home to the farm with her daughter Susan.  She was driving a beautiful convertible, which she called her “Selling Real Estate Car” that everyone wanted to have a ride in. It was a far stretch from the Nash Metropolitan that was her first car.

Edna was a classy lady and I would love to have her come in and sit down at a piano and play the songs from the good old days.