Gordon with his guitar

After Verna and Georgie came Gordon, the first boy in the Stone family.

In the winter, the house was always cold in the morning, so someone had to get up to start the fire and make coffee. Gordon would get up between 4-5 a.m. and start the fire, open the oven door, play his accordion and sing songs. After that, he’d pick up his guitar, play it and sing. And, yes, he would make the coffee and serve it in bed to anyone over 12 years of age!

From the time I was little, I remember him picking a tune and singing just a few lines of a song. It seems that he liked playing little pieces of songs more than the whole thing. Not that he didn’t play songs in whole.  Maybe it was the way he liked to practice, a snippit of a drill, a sound or group of words triggering him playing a two- or three-line song. Gordon loved country music and it wasn’t hard to get him to bring out his guitar and sing songs till late in the night.

He was a bit on the shy side and, like Georgie before him, I’m sure he was a disappointed that he wasn’t able to continue with school after finishing Grade 8. With Saskatchewan being in the midst of the Depression and money at home so tight, my parents couldn’t afford to send him to high school and so, at home he stayed to help our Dad with the farm. 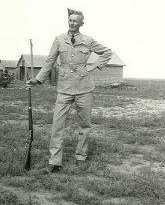 In 1941, Gordon enlisted in the Armed Forces but because he had only a Grade 8 education, they would only accept him in the army. His cousin Roger, who was the same age as he was, but had completed Grade 9, also enlisted, but his education enabled him to get into the Air Force and became a pilot. Like most young men who served our country, once the war was over and he was back home, he didn’t want to talk about the war. But he was a proud Canadian and never missed the Remembrance Day services.

He was a good friend to my husband, Doc and when we came to the farm the two of them were always out exploring somewhere. Gordon was a good dancer and light on his feet. After returning from the war, Gordon farmed and worked until retirement for the P.F.R.A. at Gardiner Dam.  He was in charge of the gates that control the water levels for the dam and was responsible for opening the spillway when the water was too high.

One cold winter day, Gordon phoned me to say that he heard on the radio that a Travel Agency in Saskatoon had a special vacation package to Mazatlan, Mexico, for a week, and the price was right.

I was sure I could get the time off work but had to check with Doc first before saying “yes”.  Five minutes later, I was calling Gordon back, we would be able to go too!  At lunchtime, we packed our bags and put them in the car and right after work we drove the the 120 miles to Gordon and his wife Margaret’s farm, picked them up and were on our way to Saskatoon. We stayed overnight there and caught the Pacific Western charter flight the next morning.

Gordon Stone with his prize on the flight to Mazatlan Mexico. Margaret (his wife) is next to him, Doc O’Shea is seated right behind him.

The charter was nearly empty: there were only about 30 of us on a plane that held 110. Not long into the flight, the Captain came on the intercom to welcome us aboard, as a Captain usually does on a flight. And then he said that they needed to give away some booze.  He went on to explain their dilemma: the plane would not be allowed to land with so many bottles in their possession — and the 30 of us would never be able to drink enough to reach that number.  So he said we would do a quiz and he would ask some questions and would award a bottle to everyone who answered the question first and right. 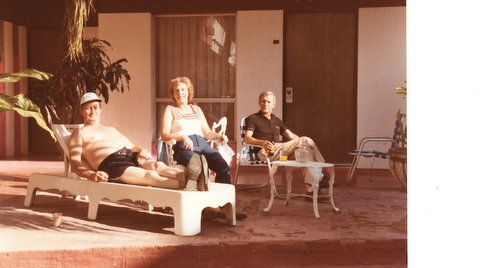 Then out of the four of us I was the ONE who spent the next four days with Montezuma’s Revenge.

I miss all the times when Gordon would bring out his guitar and pick a few chords to a song and soon we would be joining him in a new or old country song.

Once summer night a gang of us went to the bar in Elbow in “Big Green”, a converted kindergarten school van we owned, named because it was school bus yellow. After spending some time at the bar, we picked up some food and decided to go down to the park by the South Saskatchewan river for a BBQ. One of my other brothers, Gerald, brought his guitar along and we were singing Tom T. Hall songs all the way to the park.

It was dark by the time we arrived at the picnic site but with the headlights of the van, we were able to find an empty BBQ shelter. This was a building similar to some shelters you might see on a golf course for inclement weather such as lightening storms: two sides are partially open, usually from about 4′ from the floor to the roof.  The BBQ was a built in fire pit for wood and a stainless steel top the width of a counter and several feet long.

We piled out of the van, got the fire going, put the vegetables in foil and got them baking and then put the steaks on. Gerald was still playing the guitar and all of us were singing along (when we knew the words) and when a song was finished, there would be stories and jokes.

And that’s when we see a guy with a flashlight approaching the site.

Who’s making all this noise?

Well you can see we are just having a BBQ, someone said.

This guy said to no one in particular, “I’m going to call the Park Warden”.

Then Gordon said, “There’s no use calling the Warden cause I’m the Warden!”  It was just a little white lie that nearly had each of us in stitches, but it made the flashlight man leave!  We ate our delicious food and took our party back to the farm and it was only this side of midnight when we arrived.

There are times when you have to have a little fun.