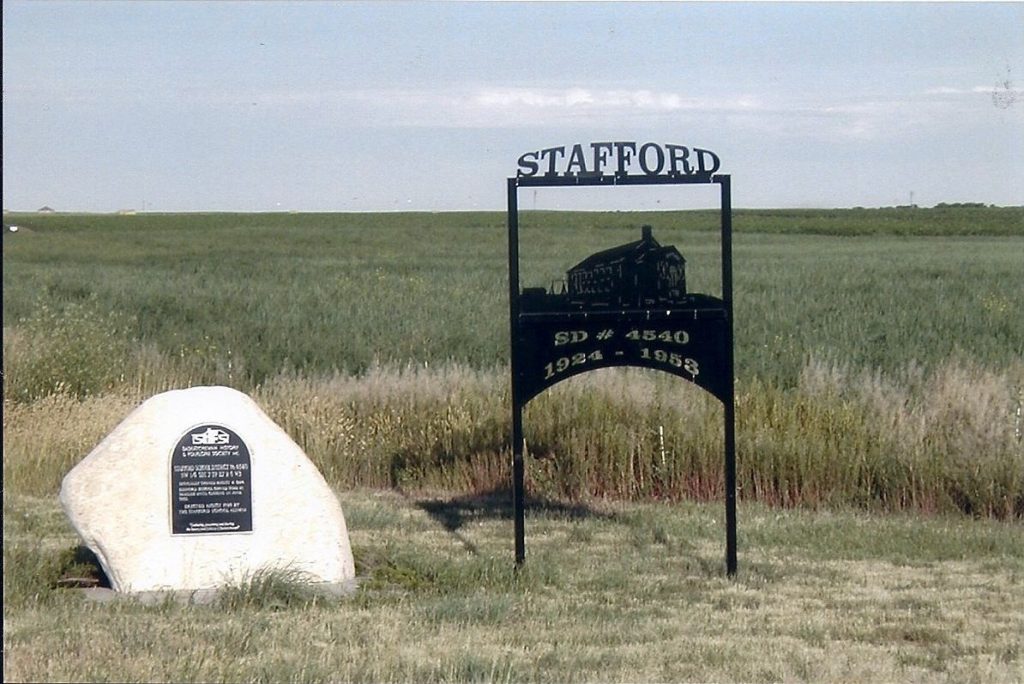 My first school was at this sit

If any of you have watched Anne, the CBC television series based on L.M. Montgomery’s Anne of Green Gables series of books, you’d know the heroine, Anne Shirley Cuthbert, attended school in a one-room schoolhouse. I, too, attended a one-room schoolhouse and for those of you who have no idea what it was like, or those who’d like to take a little walk down memory lane to their formative years, let me tell you about Stafford, our one room schoolhouse, in School District #4540, Strongfield, Saskatchewan.

Stafford had students from Grade One through Grade Eight. Although students in Grade 9 and 10 could come and use a desk to work on their correspondence classes sent to them from the Department of Education, Correspondence Division, the teachers weren’t qualified to help the high-schoolers.

I started school when I was six years old and although I was very excited to be starting school, I had visited it on several occasions before I did — like when the annual Christmas Concerts were held.  As previously noted here when I was five years old, I made a guest performer, reciting all 27 verses of “T’was The Night Before Christmas“. 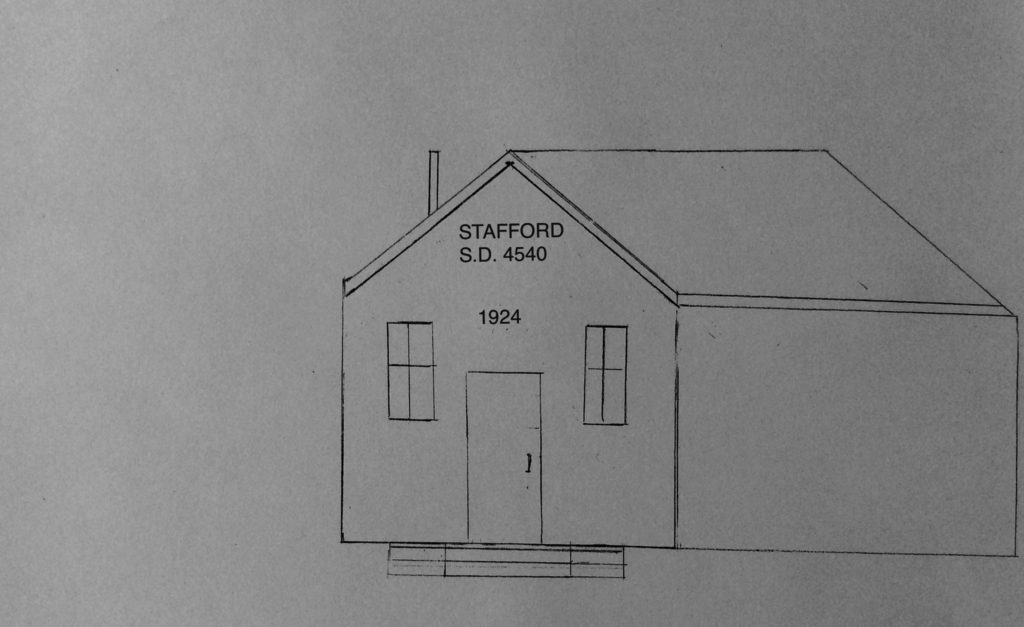 My drawing of the Stafford School house

The building itself was quite large. It was, perhaps, one of the largest schoolhouses in the area. It may have been built as large as it was because there were many children in the area at that time. If I think hard enough, I can still see in my mind’s eye what the what the front of the school looks like

I remember the smell of freshly waxed floors at the school when classes started in the fall. In the wintertime you could smell the burning coal from the coal-fired furnace.

I was unable to locate any pictures of our school so these are my drawings. Not perfect, of course, but this is how I think it looked 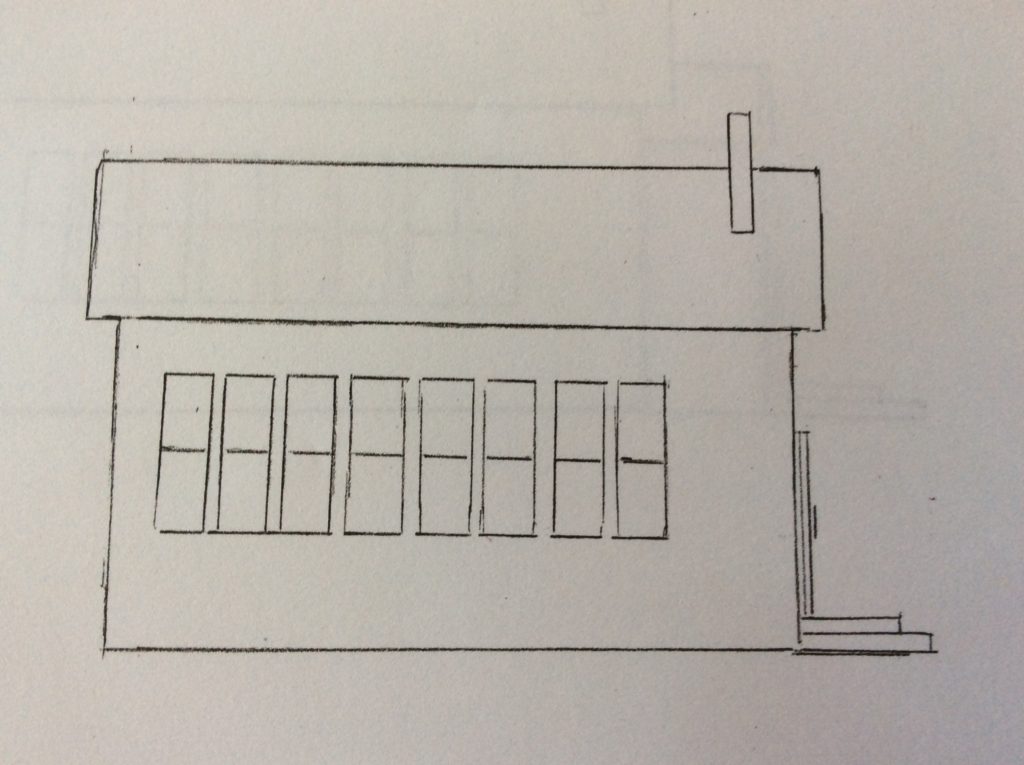 My drawing of the side view of Stafford School

Fall was a wonderful time to be at school. My family and cousins were baseball fans and many of us could come down with a mysterious flu bug when the World Series was being played in October.  We had a two-acres schoolyard with plenty of space for the softball long hitters. What we lacked in equipment we easily made up in enthusiasm for the game.

Not our school yard but you get the picture

We played ball during both recesses and lunch hour. Of course the stronger boys could out-hit the rest of us (but if I got on base I certainly could run FAST!)

My brother Jim recently sent me a letter, recounting one of his early jobs, keeping Stafford school warm in the winter. “From age 12 on,” he writes, “I took my turns as a fireman. I earned 20¢/day. Of course the school was empty over the weekend  and often the temperature in the winter could be as cold as -30C so it was awfully cold on Monday mornings!

“There was a crawl space under the school room. Once one of our neighbours from the Wheat Plains district bought a new car and was proudly driving by, windows open to savour the fresh air, when a posse of urchins (aka students) picked up handfuls of dirt and pitched them in through the open windows. The driver made a three-point turn, the posse took off and took refuge in the crawl space. We could hear muffled voices, apparently complaints to the teacher, but nothing came of it. The neighbour getting the dust shower was Lars Grunerud. He was rumoured to be dating our teacher, Grace Gifford. I got in trouble by writing on the blackboard – Grace and Lars.”

As with most schoolhouses of the time we had an outhouse. It was at the far east end of the school yard and in the winter months you really had to make a run for it!  It was used ONLY for the girls — the boys had to use the barn!  It was always clean and had the most unique toilet paper holder.

The interior of the schoolhouse. The light for the school came from the north side of the building and there were about eight windows on that side. Along the west side of the classroom was cupboards, top and bottom. These cupboards were made of wood, possibly elm, and were a light brown colour. The upper cabinets housed our library, which contained thick, heavy books — books too thick and heavy to get me interested in them. Hidden from sight and stored way up high probably added to them being incredibly uninviting to read. I can’t remember ever getting books from the library for reference and I know I never took a book home to read. 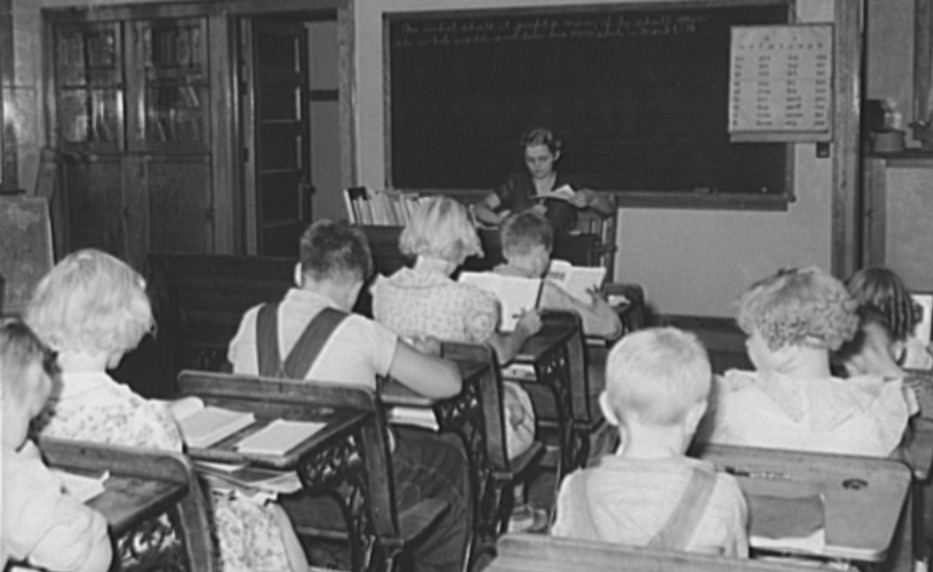 Our desks were like the ones in the featured image.  We actually had room in our desks for all our scribblers relating to each subject we were taking. We would never have to worry about a scribbler or pencil going missing: we had an honour system and nobody touched the contents of someone else’s desk.  We never, ever, took our scribblers home — or even had HOMEWORK.  Nobody had such a thing as a back pack all you carried to school and home was your lunch pail. I’m pretty sure empty Roger’s Golden Syrup tins with the handles on it was what we used! Our lunch pails held our sandwiches and usually an apple. I remember having sliced radishes, cucumbers or tomatoes  (even sliced dill pickles) in my sandwiches.  Sometimes baloney, canned salmon and even peanut butter and jam!  How tasty that, first ripe tomato from our garden in the fall, tasted in my sandwich. We had a large swing set at the school and when the weather was nice we girls often sat on the swings to eat our lunch.

I can’t remember any student that had to repeat a grade.

My teachers were my sister Verna Stone, Bill Louden, Edith Skelton, Helen Bakke, my cousin Glenna Stone, Jeanne Hundeby and Beatrice (Bea) Siefert. We had good teachers (with the exception of Bill Louden) and with 20 or more students from Grades 1-8, it must have been quite a challenge for them! It wasn’t easy to get teachers as our school was 14 miles from any town.  We had no roads that were passable for cars/trucks in the winter months and we were past the stage of horses and sleighs. Being stuck out there in the winter would have been very lonely: it wasn’t any wonder most teachers didn’t stay for more than one year.

My brother Gerald (who was 23 at the time) told me that Bea Siefert wouldn’t let him kiss her because she thought that’s how you got pregnant. Going back to Anne, there was an episode where she pretty much told the girls at school the same thing.

One of Gerald’s favourite stories was when one of the teachers announced the school was getting a new book – The Canada Book of Prose and Verse. He heard the title as The Canada Book of Frozen Birds! For the life of him, he couldn’t understand why anyone would want to read about frozen birds.

I loved going to school and was good at it. Since I skipped Grade Two I was alone in my grade until the McIntosh family moved into the area and Maxine was with me in Grades Six to Eight. It was most interesting listening to the teaching of the grades ahead of you, when you knew you would be taking those classes the next year.  And also you had a feeling of smugness when the teacher was teaching the grades below your grade, after all, you already knew that stuff! (Like long division!)

Discipline was not a problem at our school. I suppose there was a bit of “testing” what the students could get away with the start of a new teacher — but that never lasted long and we knew the teacher was the boss. As a rule, we were well behaved; giggling and passing notes to friend or foe was about the limits of bad behaviour. Sometimes a student had to stand facing the corner at the front of the room for a time out!  Not only did our teacher have a bell on his or her desk for calling us in for class but one ring of the bell could certainly quiet the room. 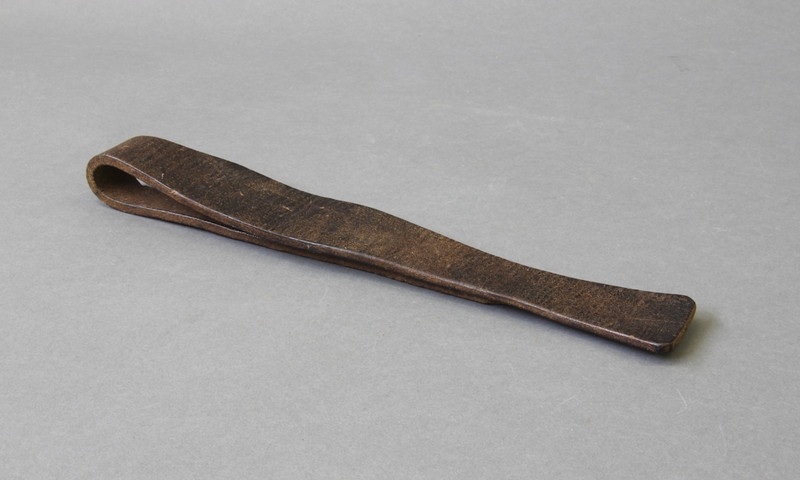 School strap – I saw it on the desk once but never saw it used.

In the bottom drawer of her desk was also a leather strap and just the threat of it being used was enough to stop any incident from getting out of hand.

Spring was the most exciting time for our students would enter into competition with the other schools in the district for a Track and Field Meet.  Our school had a history of not only participating but winning red ribbons ( first prize) and this had to be upheld by the current student body. We had the ball diamond to practice racing and pits for high jump etc. My family had similar facilities at,home and this along with good genes made for competitive athletes to represent our school. We spent a lot of time outside the school practicing for this annual event. Most of our school work was done by May and the teachers were happy to have us out of the school room.  The meet for the Outlook School Unit was held in one of the hamlets in our area: Glenside, Hawarden, Strongfield, Loreburn or Elbow. Perhaps a hundred kids from Grade 1 to Grade 12 were competing. I was so excited I can feel the adrenaline rush even to this day of my first track and field meet. My Mom had seen me a new outfit to wear: black shorts and a red top and with my clean, new running shoes I felt super special. See “My early years” post. Often our school won a the prize for the best results of the number of students participating.

The school had a piano and when my sister Verna taught us for one full year and one half year, we would sing songs every Friday afternoon. We had debates, spelling bees and geography matches involving the entire student body.  Sometimes we were allowed to take names from the Saskatchewan Wheat Pool map that had all the towns, hamlets and even sidings that had a Pool elevator in the Province.

Bill Louden was something else when it came to being a teacher. HE was at our school the fall of 1942. (If our parents had known how little academic work we were doing he most likely would not have lasted a month. But nobody would tell as we were having a blast!)

My brother Jim will tell you ALL about Bill Louden. Hang onto your hats these stories are in the next posting.