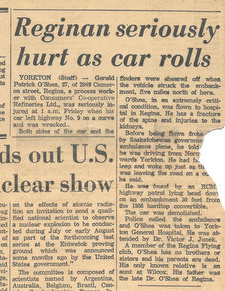 For two weeks, it was touch and go as to whether or not Doc’s body would reject the bone graft, and if he would survive. But he did.

A few weeks later, he was transferred out of Intensive Care and moved to the one of the two Disabled Veterans Association wards. The “O South” Wing of the Regina General Hospital was a 40-bed ward, focusing on healing broken bones and helping amputees from World War II recover. The “O North” Wing was for internal medicine.

Life in a Stryker Bed

Of course, hospitals were much different back then compared to what they are today. Some of the patients were true veterans, not just of the war, but of that ward. Several of them had been living there for several years, and a couple of them were polio victims. Patients — and visitors — could smoke cigarettes and were known to have visitors bring in their own drinks too. With all those men, there were some crazy incidents: one of which was an unruly patient falling on top of Doc while he was in the Stryker bed. 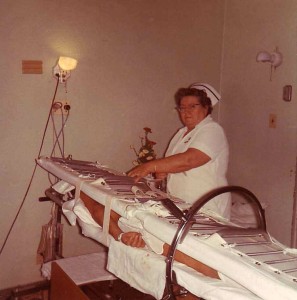 A Stryker bed is not much wider than a stretcher. Doc was only able to turn on each side and his stomach but for the entire time he spent in it, he was never upright. He was kept on the Stryker bed to stabilize the bone graft in his spine where the five vertebrate had been smashed. Life in the Stryker bed was uncomfortable, and boring.

He was limited to the amount of time he was allowed off this bed but sometime in the summer of 1958 he started physiotherapy.

At first, he was only doing exercises to strengthen his legs — and he had a mixed up paralysis!  The damage to his spinal chord left paralyzed in both legs: one leg was paralyzed above the knee, and the other below the knee. One knee wouldn’t lock and on the other leg, his foot had dropped.

But Doc was determined. First, if he was going to live, he would not be living in a hospital for the rest of his life. As the son of a doctor, he’d been around the block enough to know that there were only a few options available to him. There was the Wascana Hospital, a long-term care hospital a few miles south of the General. He knew that if he was moved there, chances were pretty good he’d never leave. Next was getting out, but needing a wheelchair. And, if he was dreaming, a favourite dream would be to walk again.

After he was taken off the Stryker bed, he was fitted for braces on his legs. For anyone who has seen the movie Forrest Gump may remember when Forrest was young, he wore braces on his legs. Doc’s braces were just like those. He had a short brace for the dropped foot, and a long brace (hinged at the knee) for his other leg.

These braces had to be attached to the shoe between the sole and the heel. There was a leather pad that covered his knee on the long brace. The supporting sides of the braces were steel and even the short brace was very heavy, the long brace weighing about 10 pounds. The braces weren’t just heavy, but were also a menace to his legs. The long brace with the knee hinge would often rub on the side of his leg and make it bleed and the dropped foot would develop a callous that needed to be cut of using a razor blade where it pressured into the side of the shoe.

Oh, how his legs would ache.

A new challenge: to try to walk

Now that he had braces, the physio routine was changed so he could try to walk again. You have to realize that Doc had lost weight and had not been getting ANY lower body exercise so he was pretty weak and this was a slow start.

Last week I spoke the physiotherapist that worked with Doc. She asked me not to mention her by name, and so I am calling her “Sharon”. Sharon, now in her 80’s, said in her lifetime of working on patients, Doc was the the most memorable of all!  She said his sense of humour was so great — and that was probably what kept him sane all those months in that ward. Sharon said he was so determined to walk and they pushed and pushed to get improvements each day.

“You can do it!” said Sharon, the physiotherapist.

“No, I can’t,” said Doc, struggling.  But little-by-little he managed a few steps. And as he did, perspiration was running into his eyes.

So they worked hard. Every little bit of an advancement was a major victory for both he and his therapist.

Working on the Ward

Sharon may have been working on Doc, but Doc was also working on the people in the ward.

As usual, cars were at the top of his list as to how these guys could gain some independence once they got out.

“You need to get a 2-door,” he would tell them, “so you can equip it with a hand brake and slide your wheelchair back behind the seat.” This is something, in fact, two of the polio victims ended up doing. One of those men ended up getting married and having a family; the other spent his time “on the outside” mostly at The Royal Canadian Legion.