Oh, the joy! Oh, the happiness. Oh, the thrill.
Oh my! Will I ever have A BIG BAR BILL!

What thoughts go through your mind when you finally make the ultimate golf shot, a hole-in-one?

Having a hole-in-one is pretty special. But having multiple holes-in-one? How special is that? Mega!

Brian Harman had double aces at the 2015 Barclays. His golf ball and the shirt he was wearing ar now on display at the World Golf Hall of Fame in St. Augustine, FL.

During the final day of the 2015 Barclays, on August 30th, 2015, PGA playing pro, Brian Harman did something amazing, twice. He made two holes-in-one, twelve holes apart from each other. Both were made on par 3’s at the Plainfield Country Club in Edison, New Jersey.

Harman’s first hole-in-one came on the 196-yard third hole. And his second hole-in-one was on the 228-yard 14th. By making those aces, he became the third PGA player to ever score double aces in the same round. Now, that’s pretty special.

The World Golf Hall of Fame in St. Augustine, FL has both Harman’s golf ball and the shirt he was wearing on display. 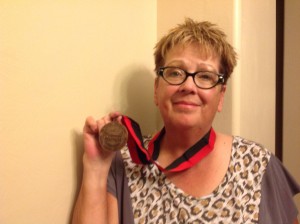 Deborah Rowbotham showing off her medals from the Huntsman Games, which we both played in 2014.

My niece, Deborah Rowbotham, knows what having multiple aces is all about. She has had three – yes, count them, THREE holes-in-one! And to top it all off, she made all three of them the very same summer, and two of them were on consecutive Sundays.

This is what Deborah said about her string of aces, which happened in 2001:

It was unreal, shocking, exhilarating and, thank goodness, I had hole-in-one insurance!

All of Deborah’s aces happened at the Dundas Valley Golf and Curling Club in Dundas, Ontario. It’s Deborah’s home course, and I have played it several times both with Deborah and with my sister (her mother) Georgie, who was a long time member there. Georgie was 96 when she passed away last fall, but she was an active golfer until her 86th year.

It wasn’t until Georgie was 75, in 1993, when “Gorgeous George” as we used to call her, had her only hole-in-one, again at the Dundas Valley course. And Deborah, who’s been golfing since she was 11, was there to see her mom’s ace! 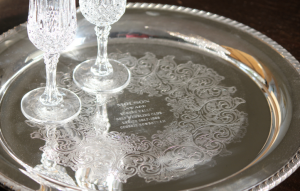 Another one of Georgie’s proudest golfing moments came in 1968 when she won the Molson Award for the Ladies Golf and was given a beautiful silver platter as a memento.

Since I’ve played the course, I even know the holes that Deborah’s amazing feats were accomplished.

Dundas Valley is another one of famed Canadian golf course architect Stanley Thompson’s designs. Look closely at the name and you’ll see the word “valley” in it those valleys really come into play with the course. You will have an abundance of sidehill, uphill and downhill lies on nearly every hole on the course, and it must have been quite a challenge for Thompson back in the 1920’s to come up with his design.

Even so, many of those holes are familiar to me as they are similar to another Thompson designed course – Tor Hill in Regina, Saskatchewan. Although I moved from Regina to Calgary, Alberta years ago, I’ll always consider Tor Hill my “home” course.

As for me, a hole-in-one has always been elusive. But each time I step on the tee-box of a par three and look towards the pin, I imagine in my mind’s eye the flight of the ball, landing lightly on the green, and skipping a few yards and then rolling into the hole. Alas! I have been close, SO CLOSE, more times than I would want to tell you about, inches to the left, inches to the right, but never close enough to fall in and find the bottom of the cup.

If you’ve made an ace, there are different places that you can register your accomplishment online, but many of them exclude international players. One that I found that includes acers from around the globe is the Golf Digest Hole-In-One Club where you can enter in all your details, including date, which course you were playing, which club you used and has a searchable database to find friends or folks you know who have registered their aces. If you’re worried about hole-in-one insurance, one international vendor is Hole In One International who, according to their Twitter page, has paid out over $45,000,000 in cash and prizes to contest and promotion winners worldwide since 1991!

No matter if you think a hole-in-one is a sign of golfing skill or just a lucky shot, they’re amazing to watch and they’ve got to be amazing to make. This year, on the 2014-15 PGA Tour, 41 holes-in-one were recorded, numbers 40 and 41 belonging to Brian Harman. Billy Hurley III was the first one to record a hole-in-one last season, and both he and Andres Romero joined Harman with two aces in the season, although Harman was the only player to record two holes-in-one either at the same tournament, or on the same day.