I wrote about Doc’s association with Speers Funeral Home in an earlier post A Dead Run from Osage to Odessa.

Of course I went to Speers to make the arrangements following his death.  Doc was a FIRM believer that spending a lot of money for a box that was going into the ground was really ridiculous and so I asked  to see the “440 Lift Lid” (Many years ago Doc had taken some friends and me to see all the caskets and this was his choice).  They informed me it was no longer available and I asked for the replacement.  No oak, no fir, no cherry wood, just a plain box. 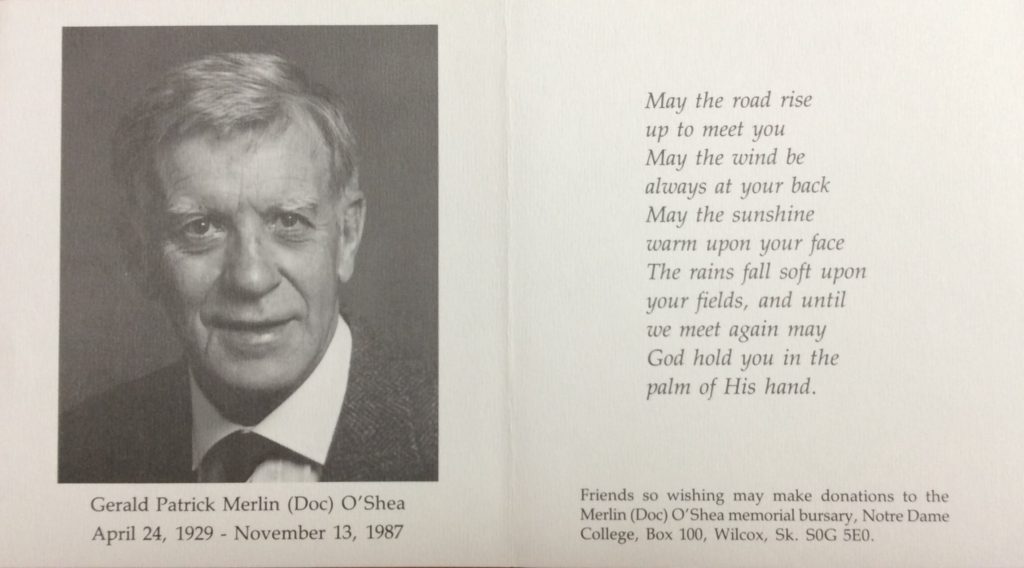 Doc was born on April 24, 1929 and spent most of his early growing up years in Norquay. Saskatchewan.

He loved the area around Norquay and Crystal Lake and he used to always say “that was soft air country”.  In later years, he had a farm in the area and he used to go up there every chance he had.

He took his early education in that area and attended school at St. Joseph’s College in Yorkton, Campion College here in Regina and finally at Notre Dame College in Wilcox.

Doc spent a lot of time with his Connaughty family around Wilcox and it was because of the Connaughty family connection that Doc got to know Father Athol Murray.  When Doc was just a young lad, Pere Murray didn’t have a car and chose not to drive so Doc became Pere’s driver.  It is an understatement to say that Pere Murray was a tremendous influence in Doc’s life.  In fact, second only to Maureen and his family, Doc had two passions in life – one was cars and driving, the other was Pere Murray.

Doc’s stories about Pere, Notre Dame and the”Hounds” were endless and no matter what time of day or how late at night, Doc would say, “Lets go and see Pere”. He and whoever was with him would pile into a car and head out to Wilcox, where Pere always seemed to be available whenever Doc came to visit.

Doc’s love for cars and driving are well known to all who knew him. I am told that Doc learned to drive at about five years of age by standing on the floor between his fathers knees so he could see over the steering wheel.

Doc’s love for driving was just about his undoing on April 24, 1958 (his Birthday). As he was coming around the curve by the airport just north of Yorkton, one of his tires failed and Doc ended up in pretty poor shape.  It was a miracle that he survived. He spent nine months in hospital and was told that he would never walk again. But they didn’t know Doc. He started on crutches, then went to two canes and finally was able to master his leg braces without support. See Broken Back Broken Dreams

Perhaps the greatest support that Doc had throughout his initial ordeal was the girl he married on October 31, 1959, Maureen Stone.  Mo was Doc’s greatest fan and became a great source of strength to him.  Rick Hansen, the wheelchair athlete, is quoted as saying that his bride, Amanda Reid, was his ‘life line”.  I am sure Doc would have said the same thing about Mo.

Speaking of Rick Hansen, who is a great champion for handicapped people, it was always Doc’s goal after his accident to not be considered handicapped. He would never use a handicap sticker on his car to get preferred parking and I am sure you will all agree that he accomplished this goal. While we were all aware of his difficulties, I never thought of Doc as being handicapped.

We are all familiar with Doc’s sharp wit and great sense of humour.  Doc worked here at Speers for a period of time and developed the habit of reading the obituaries. He used to joke that no matter where you go people die in alphabetical order, because that’s the way they are listed in the obits.  You may have noticed that Doc was a rebel to the end. He was not listed in alphabetical order.

With Doc, family was always number one. But as a matter of fact, Doc had at least four families.

He grew up with the Connaughty family always close at hand.

When he married Maureen, they had their own lovely family, Colleen who lives in Vancouver.  Lovely Lisa, who is presently attending the University of Saskatchewan in Saskatoon; Murray who is holding down the fort here in Regina and; my God Daughter, Bridget, who keeps everyone on their toes here at home.

Later in life, Doc discovered his Maloney family and we are very pleased that Doc’s sister Kay and brother Leonard from Hamilton, ON, are here today.

In addition to these three family, Doc also had his Austin Mini car family. So in addition to a great many friends, Doc was not short on family.

The first Austin Mini that Doc drove brought a lot of comments from his friends. No one could understand why anyone, especially Doc, would drive a little car like that.  But his Mini friends will agree — the Austin Mini is a unique car and Mini owners are a unique breed of their own.

Mind you, you never sell a Mini to a friend unless you are prepared to spend a great deal of time in counselling and repairs and maintenance until this friend has built up the endurance to maintain his Mini on his own.

Doc started matching people with Minis and from a small group,  the family of Mini owners are now scattered from Montreal to Vancouver.  A special relationship has developed among this family — parts, labour and advice are generously traded, all with a common goal — to get the Mini running again. Time was of no importance and all that was required were the qualities of generosity, patience and determination to be a member of Doc’s Mini family.

When I first met Doc in the early 1960’s, Doc operated the Sky Chief Texaco Service station on Albert Street and there were many motor miracles performed in his shop.  Time certainly doesn’t permit details of the salvaged motors and parts that were married to ailing vehicles, at least two of mine included — a small blue Volkswagen and a Rambler wagon.  Both involve stories that exemplify Doc’s motor genius and his big heart.

In September 1968, Doc went to work for Saskatchewan Government Insurance, an association that carried on for nearly 20 years.  He started out as a dispatcher in the Central Vehicle Agency and then to the mail room, a position he held to the present.

As always, Doc’s love and interest in machines prevailed, the staff knew who to go to get advice about their ailing vehicles. Doc’s advice would usually take the form of Doc fixing the complaint himself.  Doc’s interest in machines was not restricted to automobiles.  Doc always expected the office machines to do what they were designed to do.  If a machine was rated to put through 10,000 pieces of mail in an hour there was no way Doc would accept a throughput at a lesser rate. As with all his contacts in life, Doc was loved and respected at SGI for his quick wit and unique sense of humour.

In conclusion, I would like to read you the letter that Pere Murray sent to Doc when he opened his service station after his car accident because there is something here for all of us.

I have had it in my mind and heart to write you how happy we at Notre Dame are at your installation in business.

Your adventure in life has been marked by a triumph over adversity. You faced death and you turned full-face to life.  Injuries that would have utterly discouraged the average human you took in stride and gradually overcame. You showed definite qualities of great-hearted determination.

You will win out, Merlin.

You faced your fight with your good little wife. Alone.

Great credit goes to you both. The grace of God has been obviously with you down the years. Hang in there, fellow, your friends are all pulling for you.

Thanks to the Mini family and friends for your input! 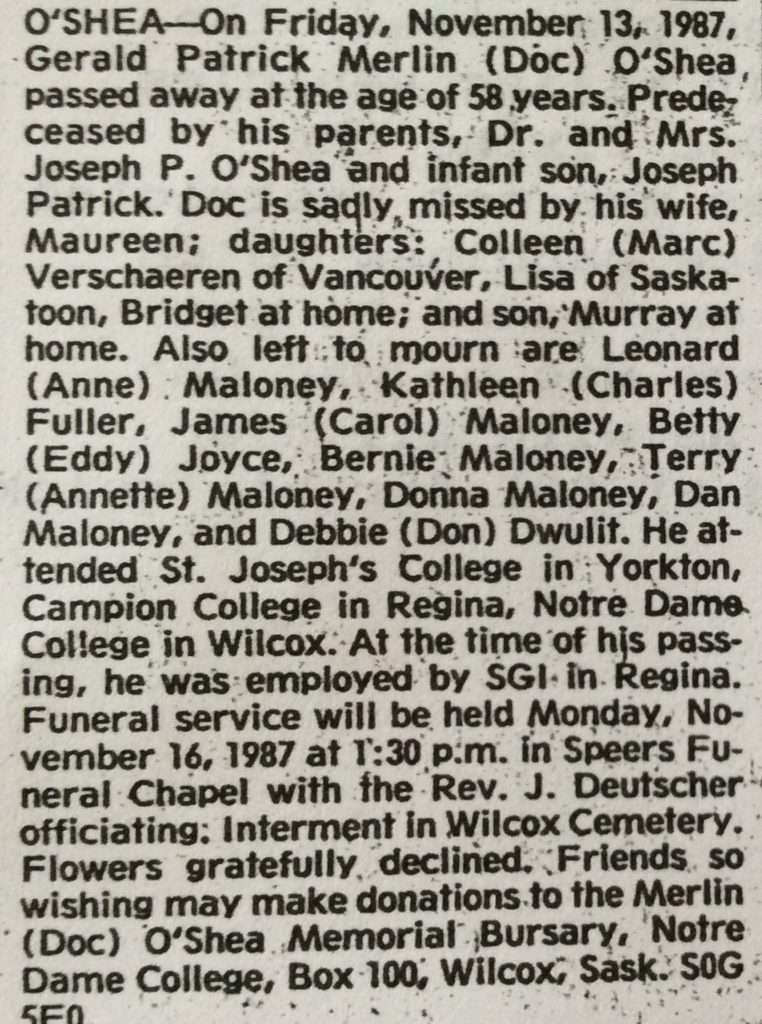 Jan Geis, who provided her talents for many O’Shea weddings was again in attendance on the piano to play “Lara’s Theme from Dr. Zhivago”. Then the crowd of over 270 joined together to sing Doc’s favourite song for many a sing-along over the years “Just A Closer Walk With Thee” and finally “Danny Boy”. 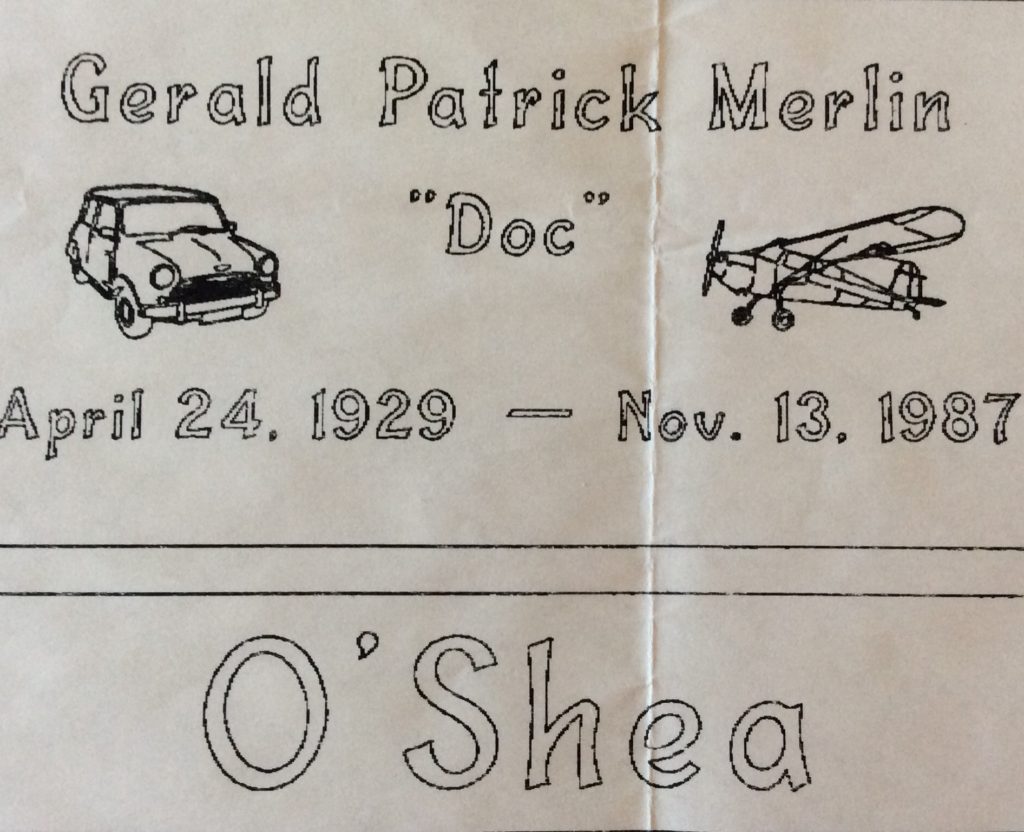 A drawing of the front of Doc’s Rock

There were dozens of cards and letters from people in all walks of life from the Prime Minister to his many nieces and nephews whose lives he had touched.  Doc was one of those people who made you feel at ease in his company as though you had known him a long time.

There is one letter that exemplifies the above. This man said he was deeply saddened to see Doc’s death notice in the paper. He worked for Commercial Printers and did deliveries to SGI, one of their biggest customers, on a regular basis and had known Doc for years. “Mrs. O’Shea, time will heal the sorrow and I sure hope you get along all right”.  Sincerely, John Simpson.

It will be 31 years in November since Doc passed away. He would be proud of how his kids have turned out!  As far as my taking on both mother and father in their upbringing he would say in his own inimitable way, “you done pretty good Mo”.