I have to tell you about the pain that Doc suffered all 29 years after his accident. See  Broken Back, Broken  Dreams.  When he was in surgery  for his broken back the medical staff did not pay much attention to the right knee and left foot. His right knee would not lock and his left foot dropped. He ended up having a long leg brace on his right leg and a short brace on his left leg. 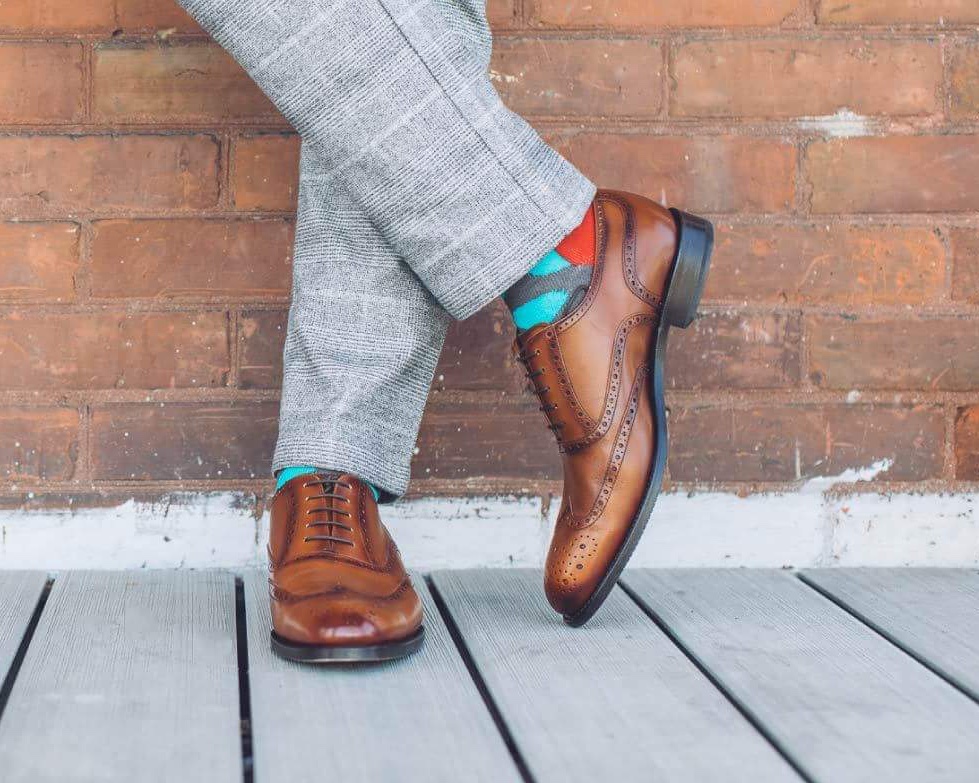 The Hartt shoe of today. Made in Canada. Quality unsurpassed.

The first braces he had were iron and attached directly into his Hartt shoes (angle iron at the bottom of each side was inserted between the sole and the heel). Later on the lower part of the braces were fiberglsss and had a foot for both the left and right brace. The short brace was very slender at the ankle and often would break. It sounded like a gunshot when this happened. Of course, Doc could not walk at all when the brace broke and one time it happened when he was crossing 11th Avenue in Regina and he had to crawl across the street. 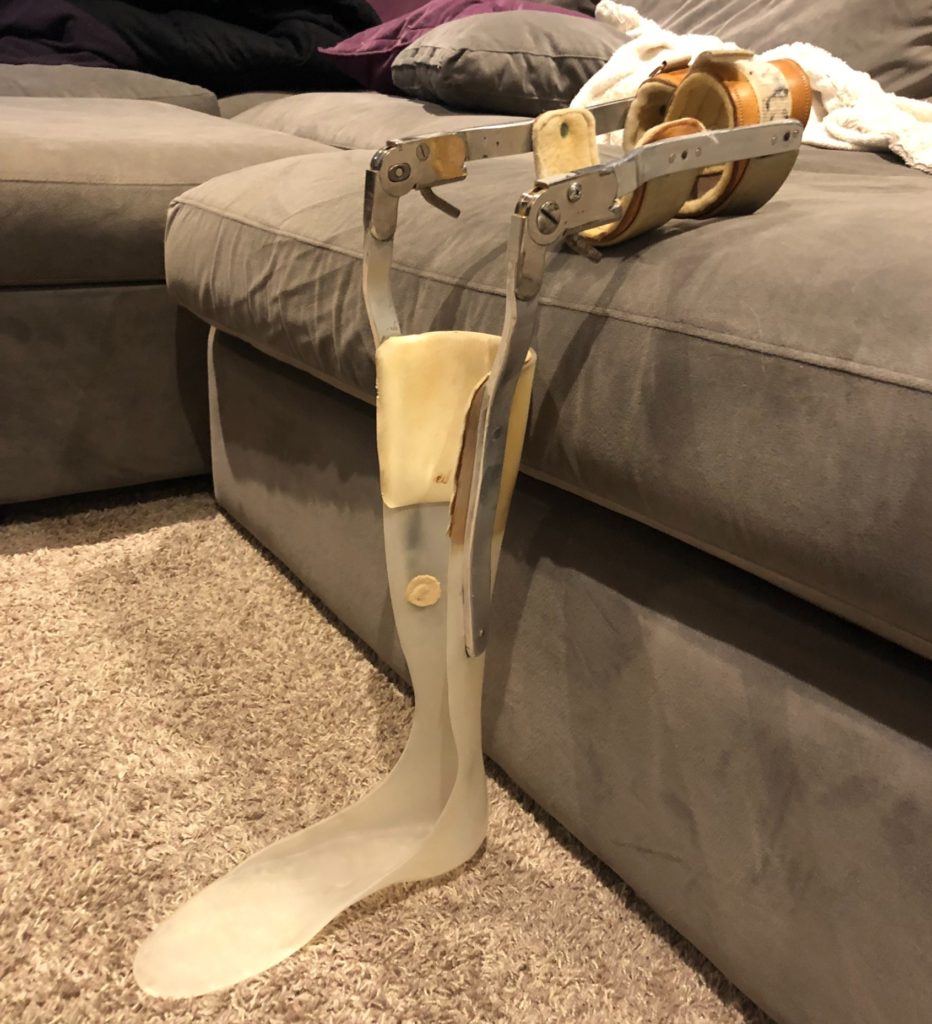 The long brace caused  problems as it would get out of alignment and rub the skin raw around his knee. The leather that covered his knee would get wet from perspiration and then crack and make his skin raw. On the outside of his foot a calluss would develop and I would have to shave it off using a razor blade. 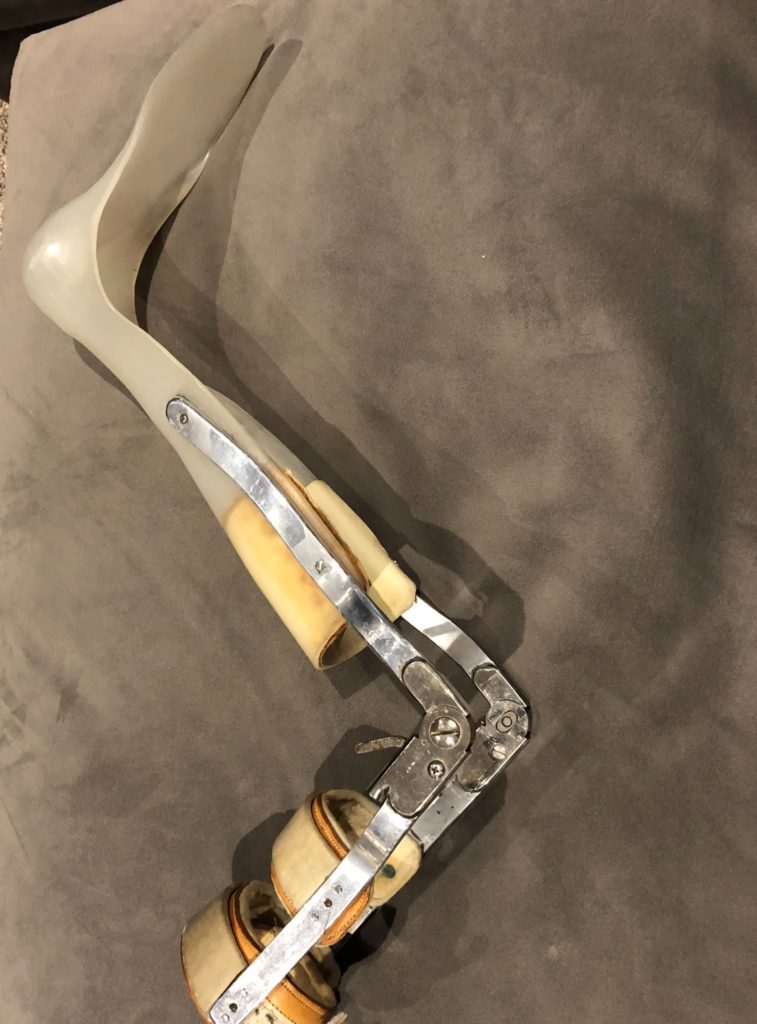 Another view of Doc’s long brace. It weighed about ten pounds.

Doc was in so much pain. It did not seem to matter if he was on his feet or in bed; there was no rhyme or reason for the pain. The doctor’s were not able to localize the pain and of course he was not about to let them operate on his back again. Sometimes he would go to bed and go right to sleep and then two hours later his leg would start to ache. He said it felt like his big toe was being blown off. He would ask me to get him  couple of Aspirin’s with a glass of water and that was the least I could do for him.

The heart attack in the spring of 1987, resulting in an anurism on his aorta.  He recovered from the heart attack and was back to work in six months. There was, of course, the risk of the anurism bursting and the doctors wanted to do surgery to repair this problem area,  They called and said he could have the surgery. Part of the surgery was to get better circulation to his legs.He questioned the nurse if it was necessary and then called Anne and asked her what she though.  Bridget was standing in the kitchen when he took the call and She remembers him telling the nurse on the phone that he had just gotten back to work and was feeling great. He went ahead with the surgery and they did get him back in when he had the heart attack in recovery but he went into cardiac arrest and it just wasn’t meant to be.

My 28 Years With Doc Part Eight is next…