When the O’Shea family moved back to Saskatchewan from Chilliwack, BC in 1948, they bought a small house in Wilcox, 30 miles south of Regina. Of course, his Mother, as usual, insisted he further his education and there was a school in Wilcox, Notre Dame College, offering a Bachelor of Arts degree through its affiliation with the University of Ottawa.

Wilcox was a small town back then but it was a modern town. Margaret Turnbull was the telephone operator, linking all the calls coming into and going out of the town.  She must have been the ONE who really knew what was happening in the village.  She certainly knew who was talking to whom and when! Her office was right on Main Street, and she and her switchboard were visible from the street.

The Post Office was a gathering place for people as well.  One of my friends, Bev, remembers a volunteer job she had as a teenager.  Doc’s Aunt Nellie and Uncle Jim Connaughty were quite old at the time and Bev would go to the Post Office and get their mail and deliver it to their door.  I am sure Aunt Nellie would meet her with fresh baked cookies: Aunt Nellie’s home always smelled of fresh baking, especially bread and buns.

But Doc was a town boy and because he was living at home, he was not part of the dorm life of the boarding school that Notre Dame was. He attended classes but he would tell you that he really wasn’t interested and could hardly wait to be out of the classroom. He was part of the community outside the college, with many relatives and friends. Many of his friends were the farmers around Wilcox, from Drinkwater to Milestone, as he was always interested in all kinds of machinery. Harvest time was so exciting when the crops were good (and this is good farming land) and anytime he could go and drive a truck to haul grain from a combine to the grain bin was something he’d jump at.

Of course, his family was close to Father Athol Murray (Pere) – with their Catholic background and the Doctor coming from Scotland via Quebec, rather similar to the English and French-speaking Murray (and therefore he was called “Pere”). Doc’s Dad always had a car to drive and Doc was often asked to drive Pere and the other priests to meetings and Knights of Columbus gatherings and any fundraising opportunities Pere could think of, which was quite a few! Often there were students who had to stay at the college when the other students had enough money to go home when there was a school break. Doc would end up driving Pere and these students to Regina to Champ’s Fine Foods on Scarth Street, where they would have a fabulous dinner. Bob and Bill, the Champ brothers, knew there would be no tip when it came time to settle the bill — in fact they knew there would be no money for the bill, either. Of course this happened only a few times a year and the Champ family probably felt good to see the young students enjoy a good meal.

Pere would walk into the restaurant, take off his signature buffalo coat, throw it in the corner and loudly announce, “Hey, I want you to meet four of the finest students from the college!” And then the introductions would begin.

Once there was a clergy meeting down in the Francophone town of Gravelbourg. Father Murray wasn’t always all that popular with the other priests since he had that rag-tag college with their hockey players, Pere was rather a gruff-speaking man, and he was always looking for money. Anways, there he was at this meeting, trying to get the other priests to take some action they were wont to do and a couple of them started nattering away, just behind his back, in French.

After a minute or so of their complaints, Pere began a conversation with Doc, in fluent French, of course. Both priests turned as red as beets. Pere and Doc laughed about it all the way back to Wilcox. 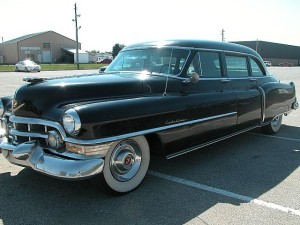 , the best looking cars around back then. He started working there while attending the College.  At first, his job was to wash the cars.  It was a “job” he loved! and that was an understatement! All his life he loved a clean car and it didn’t matter if you were going on a gravel road to a farm, he never left home without a clean car. The cars at Speers were hand-washed and hand-dried, inside and out.

Later, Doc and Ron McFarlane became drivers, driving the families from the funeral home to the church, the cemetery, and back to the chapel once the job was done. Sometimes they would be asked to jockey the lowering machinery parts and imitation grass to the gravesite – especially on busy burial days. Jobs were handed out via a bulletin board in the staff room where the daily happenings were posted.

Doc told us about the time he took a phone call from George Speers for a job that, he thought, was for a funeral in Osage, SK. where the lowering equipment was needed. It was a winter’s day, snowing hard and very cold. When Doc got to the cemetery at Osage there was no grave dug — so he immediately figured out that it wasn’t Osage, but Odessa, about 35 miles away.  There was no highway between the two towns and the grid road had not been snowploughed.

I’ll bet that big Cadillac never had a ride like that day!

Doc said he was flying, a real dead run, hitting the built-up snow drifts at a pretty high speed. He managed to get the equipment in place and the grass down — just before George Speers arrived with the family. George said,” It’s a good thing you didn’t put the grass down any earlier because it’s really snowing hard.”