Now back to Doc’s accident.

Dr. Ralston was the Orthopaedic Surgeon on call at the General Hospital in Regina when Doc arrived by air ambulance.

Doc was in surgery for at least 14 hours. Later on he said that the orderly’s told him they were exhausted after the surgery because it took so long for Dr. Ralston to carve the bone to fit in Doc’s spine where five vertebrae were smashed. The bone was from a young
fellow who had died in a car accident and at that time his parents must have given permission for the use of his body parts. This was before there was such a thing as a signed Donor’s Card.

Doc was put on a Stryker board. This was not much more than a stretcher. He was strapped onto this board and turned over a few times every day. This was to enable the bone graft in his spine to heal. He was moved from ICU to the DVA South wing of the General Hospital. I think there were about 30/40 beds in this ward and with all these patients in an open space it was quite chaotic.

I did not know what had happened to Doc. I had not heard from him since he left for the farm. I did not know about the accident until I saw the write up in the Leader Post the next day. His next of kin were Marcella and Hughie Gordon from Wilcox and they had been notified by the RCMP and were at the airport when Doc arrived by Saskatchewan Air Ambulance.

I had never met Marcella and Hughie so they did not know to call me. I called the hospital and they said that Doc was in critical condition and not allowed any visitors. I was devastated.

Doc’s friend Bob Galloway called me and he took me to the hospital.  When I finally was able to see Doc he was heavily sedated. His head was mostly covered with bandages but you could see those beautiful brown eyes. It was at least ten days before they took him off those powerful drugs, He was pretty much out of it when I visited him those days. I was surprised that Kathy was back in his life and there every day. For whatever reason she was very keen that they should get married! Doc was not so keen. See previous post –  Queenie

Something was drawing me to go to the hospital to see him and he was so happy to see me but I really did not know what to think of the situation. Certainly nobody’s knew what to make of his chances for recovery. He, of course, was looking at the bright side. He was young, and had just turned 29. Mostly he was hoping that the bone graft
in his spine would stay stable and he was eager to get out of
the hospital. It was not that I felt sorry for him that I went to
see him on a regular basis. We did not talk at all about the future just hoping for healing day by day.

Although I went out with other guys I still kept going to the
hospital to see Doc. There was something about him that just kept pulling me to there to see him. I knew that I loved him before the accident but was hard to separate love from the realistic aspect of Doc maybe not ever leaving the General Hospital.

I knew that life was going to be a challenge for Doc if he even got out
of the hospital. But there were so many things about him that I loved.
He was so straight up about everything. There was no ulterior motive
with Doc. His “you’ve got to stand for something or you’ll fall for anything” impressed me a lot. He was a compassionate man,
loved dogs, would stop and help anyone with car trouble and was
honest. To say that he was honest is an understatement: he was
honest about absolutely everything. He was pretty strict in some ways but also soft and loving. You could put your head on his lap and he loved to trace your face. I’ve never known anyone else to do that. I think what he wanted most in life was to have a family of his own. Maybe he felt that way because he had been an only child.

In a short time Doc started working with Sherri Wenaus, the hospital physiotherapist. They worked very hard to try to get Doc to be able to walk. The partial paralysis from the back injury left him with very little feeling in the top of one leg and the bottom of the other. One knee
was smashed and the opposite leg had a dropped foot. 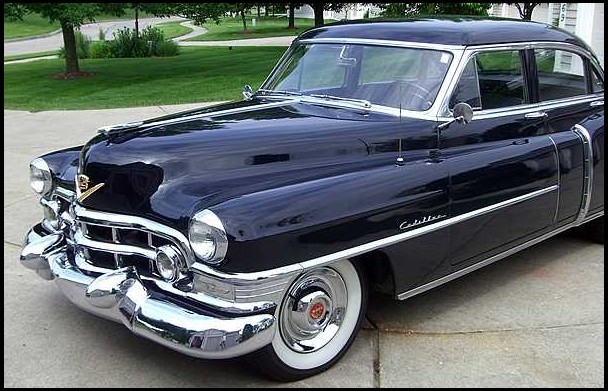 Doc was anxious to find a car to replace the car destroyed in the accident and I previously wrote about him getting this Cadillac. There were two young guys in the ward who had been in the hospital for years with polio.with polio.  Doc convinced them both to buy Oldsmobile Coupe cars and have hand controls installed in the cars.  The Coupe enabled them to put their wheel chairs in the back seat.  Both guys were soon out of the hospital.  One got an office job and married and had a family. We lost contact with the other guy. Without Doc’s encouragement they likely would have remained in an institution. 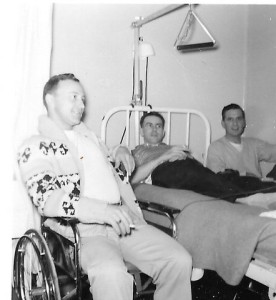 Doc read the Leader Post every day and listened to the radio. Of course his friends brought him magazines: the latest cars and  Mechanics Illustrated,  In those days the radio station would play the current number one song over and over each day.  The summer of 1958 song was “Volare –  Nel blu dipinto di blu” by  Domenico Modugno. By July 1 Doc said that he hoped he wouldn’t hear it again!  Check it out on YouTube you may like it.  I did. Doc played Cribbage with everyone available to pass the time as the days were long.

A major setback happened just before Christmas that year. Doc had developed kidney stones and had surgery on Christmas Day.  There was a Scottish doctor, named Campbell, who had spent his life doing residencies all over the world that was at the hospital.  He often came by to visit Doc.  I remember after the surgery how quiet it was in the ward over the holidays with many patients gone to visit family. The Doctor and I toasted Doc for a speedy recovery.  Our Scotch and water in paper cups!  By the end of January Doc was out of the hospital and living with Bob and Diane Hilderman in Whitmore Park in Regina.

My 28 years with Doc Part Four is next.