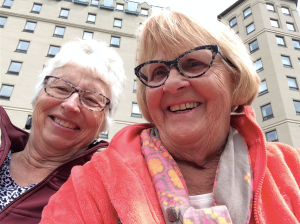 Ruth and Maureen at Lake Louise

When my daughter Colleen suggested a year ago that I should write a blog I said, “What, me??? write a blog???” I hardly knew what a blog was let alone that I could write.  I always thought of myself as a numbers person and NOT a words person. She said she would help, so it was my turn to wake up and write.

As you all know by now I have been writing and that in itself has surprised me and many of you as well.  Before I started writing the blog, I started putting a word document together with a story of my, and my family’s life, but the road trip that I took with my friend Ruth became the starting point for my blogging. The blog has encompassed a few different chapters so far, and my initial idea of it being a project that maybe my grandchildren and their children might read has turned into weekly and/or sometimes daily writing.

I turned my first 78 blogs into a book and was so pleased with the printing that I will soon be printing book number two, about the Swedish Pioneers and My Life with Doc! 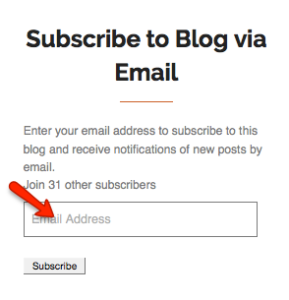 This is where you should put your email address if you want to subscribe.

If you would ask Colleen about my blogging, she would say that writing has made me a little sharper, which is always music to the ears of a gal who will turn 82 a bit later this year. I’m much better at Google searches than I was a year ago — not that I wasn’t good before, I’m just even better now. And it’s had other positive side effects, too, like getting me in touch with family I didn’t know I had, and keeping me closer to friends who I don’t get to see too often. Many of them subscribe to the blog and get an email notice as soon as I’ve put a new post up, and they click on the link and read it as soon as they see it in their in-box. (You can subscribe to the blog by entering your email address into the form on the right-hand side of the homepage (see the image) — or just it into a comment and I’ll get you signed up.)

And some of my friends call me as soon as they’ve read it my latest post. Others send me emails or make comments on Facebook. Writing and phone calls keep me busy (but I still find time to play bridge, golf and do other things too).

I’m also grateful to my youngest daughter, Bridget, who shares nearly every post I write with her very wide audience of friends. Even some of Bridget’s friends are dedicated readers of my posts, and that makes me feel really proud.

Thanks, everyone, for reading, sharing — and encouraging me to keep writing. It’s been fun, so far, and I’m looking forward to the second year, which begins tomorrow.