Bubblegum singer Tommy Roe might not have been singing about vertigo when he sang “Dizzy. I’m so dizzy, my head is spinning‘” but for anyone who’s suffered vertigo, it could be a personal anthem.

I suffer from positional vertigo and have others in my family who do too, including a niece and a nephew. My nephew doesn’t golf as my niece and I do, but his vertigo has even effected him in the shower, bending over to pick up the shampoo bottle. Next thing you know, he’s out like a light. 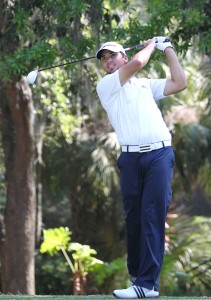 Vertigo and golf came into the spotlight a couple of weeks ago when PGA professional Jason Day had a spell of it while playing at the US Open a couple of weeks back. Happily, Day was able to finish his round, and he went on to finish the tournament tied for 9th place. Day is the most recent victim but he isn’t the only golfer known to suffer from vertigo. Jim Furyk and David Duval have have also suffered from it, so has Thomas Levet – who was backing out of the parking lot in his car the first time it happened to him. It’s surprising we don’t know of legions more as estimates range from as low as 15 million to as high as 69 million Americans who suffer from it.

If you suffer from vertigo, you know what kind of agony it is. If you don’t, let me describe it.

Everything gets fuzzy. Extremely fuzzy. You’re dizzy. You can get nauseous, and be sick to your stomach.

The first time I experienced vertigo was thirty-six years ago, in 1979.  I woke up in the morning and the whole room was spinning.  I managed to get myself to the bathroom by holding onto the wall and then went back to bed.  By later that afternoon, I was fine, the dizziness was gone and I was back to normal.

The next time it happened it was around ten years ago and after it happened, I saw my physiotherapist for a problem I was having with my foot, and I mentioned my vertigo incident to her. She told me there were specialists called Vestibular Physiotherapists who could help me with it. So I tracked one down and it was confirmed that I was suffering from positional vertigo.

Hooked me up to a computer with goggles over my eyes, I was tested. My eye movement was an indicator of what was wrong with my balance.  Crystals on the stone in my inner ear had been flaking off. Those flakes caused an imbalance in my ears and, the dizziness and the vertigo.

To fix it, I was put on a table, my head hanging over the end, laying on my back.  She turned my head to one side and when the dizziness seemed to stopped she sat me upright. WOW! The dizziness was overwhelming.

But the second time she did this, there was NO DIZZINESS at all.   I have had this happen a few times and it is scary to bend down and put your tee in the ground, as Jason Day experienced on the PGA tour.

Since then I’ve found a do-it-yourself method for relief from common vertigo, discovered by a Colorado doctor by the name of Carol Foster working at the Balance Laboratory at the University of Colorado’s School of Medicine. It’s a half-somersault method that you can try. You can find her YouTube video that explains what that’s all about.

Now whenever the dreaded vertigo comes back, I can fix it on my own thanks to Dr. Carol Foster’s discovery.  The half-somersault method does the trick for me and hopefully you will be able to use it to to survive spinning on the golf course.

Do you have positional vertigo? Have you tried the half-somersault method? Let me know.