After posting my post about pasture golf, I got an email from my older brother Jim that I want to share with you. Any explanations I feel are necessary for people who don’t know the family I’ve added with brackets. Here’s what Jim wrote:

The two-hole course you mentioned in your blog must have been the precursor to the nine-hole course that was established later. I remember Mickey (one of our cousins – his parents were my father’s twin brother and my mother’s younger sister) mowing the “fairways” with the Ford tractor and mower which gave the course a sort of legitimacy. Holes were dug with a post-hole auger.

The course record was 32.

The record for holes played in a single day was 45. Garry (one of Mickey’s brothers) and I were the participants. I don’t know who won. Probably Garry. 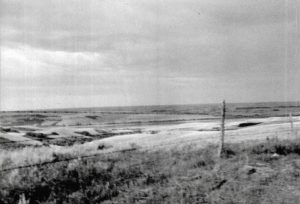 More of the river valley

When the land was sold to the government as part of the Dam construction (Lake Diefenbaker and Gardiner Dam) an allowance was made in the settlement for the partially developed golf course. Rumour has it that the allowance was $500.00.

Thanks for refreshing my memory.  I now remember those other holes.  It was certainly the start of my love of golf and perhaps yours too, Jim.