Marcella Gordon was Doc’s cousin and she lived to be 108. She was vivacious, a real character, a classy dresser — and wore high heels — for most of those 108 years. She was much more than a relative, she was a really good friend to both Doc and me, and I loved her very much.

She said that she really liked Doctor Joe O’Shea (Doc’s Dad) but not so much Bridgetta (Doc’s Mother). And she loved Merlin (as she called Doc) and almost always called him by that name, not Doc. 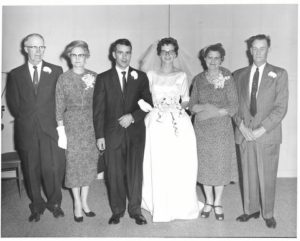 When Doc and I were married, it was she and her husband, Hughie, that were at the head table with us representing Doc’s side of the family since both his parents had already passed away. In the photo to the right, Marcella and Hughie are next to Doc, my mom and dad are next to me.

The Gordons’ Farm at Wilcox

It was well-known that you were welcome to visit them on the farm on Sunday, any Sunday. Of course, the smell of roast chicken, fresh buns and just a whiff of the lemon meringue pie would greet you as soon as you stepped inside their farmhouse, and if I think hard enough, I can almost smell it now.

They lived in Wilcox and we would sometimes go to Mass at Wilcox beforehand, then head out to to the farm to see the Gordons.

After Hughie and Doc passed away, I would try to see Marcella at least once a week. She had retired by then and moved in from Wilcox into a condo in the south of Regina. The corner chair in her livingroom was nicknamed “Mo’s chair” and you would find me there on Friday nights to watch whatever sporting event there happened to be on TV. Marcella was a great sports fan, and was interested in almost all sports: baseball, hockey, football, curling and figure skating. When the Stanley Cup was on — or the World Series — I go over there to watch with her more often than once a week. We usually were cheering for the underdog but in the World Series, it was always the National League team.

Marcella liked to have a drink of Governor General Light Rum but that particular brand of rum wasn’t sold in Saskatchewan. That wasn’t a problem, as friends and relatives knew that Marcella liked that rum and would always bring her a bottle back from Alberta when they came to visit. She liked to have her rum with Ginger Ale and a few ice cubes.

I like rum too, but I like a different brand, Lemon Hart, and she always had Coke on hand for my mix. When I think about her I can see her hustling around in the kitchen getting the ice cubes out of the freezer. She kept them in a sealed plastic container so they would not get any frost.

We would cheer and hug when goals or runs happened for our team. The patio door would be open and we didn’t care who heard us cheering.

She would take out a few of her special Brownies out of the freezer when she knew I was coming over to watch a game. And I don’t know what it was that made Marcella’s tea so good. Was it the teapot? Was it the tea? I know it was Red Rose Orange Pekoe tea. I’m not a major tea fan but I never refused to have a cup of tea with Marcella. Brownies and tea with Marcella was a special time. Marcella loved life and we had such good times together. I loved her so much.

Ken Mitchell wrote a Saskatchewan Centennial celebration book called “The Life of Marcella (Connaughty) Gordon as told to Ken Mitchell”. It’s only 13 pages long, but there are some amazing tidbits in it that I want to share with you. As this is a blog (and my publisher tells me too much over 500 words is too much for people to read) I’m going to break it down into three different parts so I can share with you some of Marcella’s story. To give you a little bait and keep you interested, you should know that when she turned 71 she got a job at the Wilcox Credit Union and a couple years later, it was held up at gunpoint and she and the manager were taken hostage — and she wasn’t scared for one minute. That story — and more — coming up!