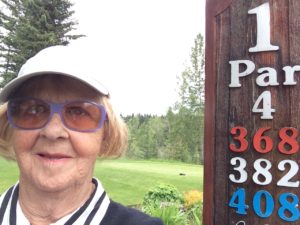 Maureen is ready for some golf.

My friend Ruth mentioned to me several times that she had never played Redwood Meadows Golf and Country Club.  The only day that fit our schedule this week was Tuesday.  We both like to play in the mornings — me, early, and Ruth not quite so early! (You may not know that I am a morning person and that could be hereditary as most of my siblings were also awake early.)

However, when I called to make a booking, the earliest time available was 1:12 p.m.  It turned out to be just fine as the temperature went up as the afternoon progressed and the sun came out on the back nine.  The weather forecast was for strong winds but we were lucky that never happened. 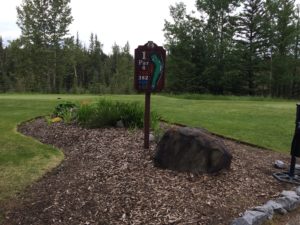 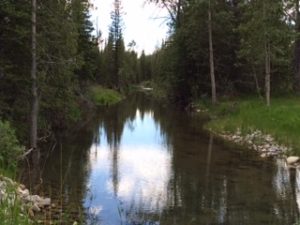 One of many ponds on the course

We waited, we watched, we saw the four fellows go into the woods to try to find lost balls on the left on every hole.  We wondered: are they likely to let us play through?

We were getting hot dogs at the snack shack after nine holes and they drove up behind us.  They had been ahead but I guessed they probably had gone to the Pro Shop to buy more golf balls for that Number Two fellow!  One fellow said they would let us play through but one other fellow said they had to wait on the foursome ahead of them.

We ate our hot dogs on the 10th tee box while we waited.  By now they have decided to play fast and they did. 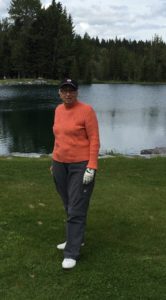 Ruth had the only Birdie of the day on Hole #8

The highlight of our day was on the beautiful Hole #8.  A Par 3 over water with the flag at the front of the green.  Ruth hit a dandy shot landing her ball just off the edge of the green, flag high.  She chipped it in for a BIRDIE.  How much fun was that?  Pretty much fun for her.  You could likely hear us cheering across the golf course.

There were no birdies out there for me but I was happy to make a few pars and actually be on in regulation on the Par 5’s.  The course is quite long and plays to 5700 yards from the forward tees.

The Pro Shop has been renovated and is looking good. One of my favourite designers, Dexim Golf, is well represented in the ladies fashion racks.
We will be back to play Redwood Meadows Golf and Country Club.