Marcella Gordon was a healthy person. She was my husband’s cousin and she never had anything out of the ordinary wrong with her. She was thin, liked looking good whenever she went out — and was quite the private person too. Sometime in 1995, I was visiting her and she made a comment, almost in passing, that she must be getting old because it was stinging when she was emptying her bladder.

I asked if she had seen her doctor. She said, “No!” – emphatically.

I told her to make an appointment right away.

And so she went to her doctor and the news wasn’t good, but it wasn’t all that bad, either. She had a cancerous growth on her bladder, a mass which could be removed by surgery  — which was performed within a reasonable period of time.

However a few months later, the cancer was back. Again, Marcella was put under the knife and the regrowth was removed. She was in the Plains Hospital in Regina which was more like a hotel than a hospital with mostly private rooms, and instead of having a central nursing station, they had portable nursing stations that followed the doctors on their rounds — and that made it easy to eavesdrop post-consultation.

Too Old for Follow-Up?

After her second surgery, I went  to see her at the Plains. She said her doctor had been in — he was pretty sure they removed ALL the cancer this time. She’d then asked if there would be any follow-up treatment and he said since she was 91 years old, she wouldn’t be needing any.

When the doctor left her room, she could hear him talking to the nurses just outside her door and one of them was quite upset there would be no follow-up treatment. Marcella quoted her as saying “This is not your average 91-year-old patient. She is more like a 65- or 70-year-old health-wise and she deserves whatever treatment would be given to someone younger.”

I asked when she would see this doctor again and she said, “Six months.” I said, “That’s too long. We’ll go back and see him in three weeks, so call for an appointment!” And so she did.

I went to see the doctor with her and I remember this as though it was today. Marcella was sitting in the one chair provided; I was standing. The doctor was sitting on the examining table. Marcella introduced me to her doctor and then began. 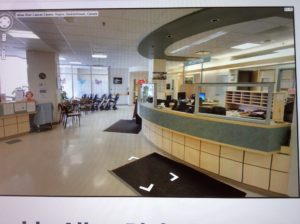 “Can Maureen go with you to the Allan Blair Cancer Center and see what their assessment is for you?”

I said that for sure I would go with Marcella.

We went to the Center and, after filling out some forms, the nurse said a doctor would see her in an examining room down the hall. Of course, the nurse had a hard time keeping up with Marcella!

After the examination, the course of treatment was determined. Marcella would get all the treatments available, despite her age.

I took her to have her first couple of chemotherapy treatments but the Center had many volunteers available for transport. And she told me that’s what she’d do, get a volunteer to pick her up, at home, drive her to her treatments and then take her back home again. The private woman in her felt that was the best option for her.

Marcella was one of the few people I have known that had no adverse reactions to the 20-or-so chemotherapy treatments she had. She didn’t even lose her hair.