Life was never easy for our Mamma. After her mother died, it was my Mom’s job to raise her brothers and sister. On June 14, 1916 my Mom, Judith Theresa (Thea) Holmlund married my Dad, George Peter Stone. 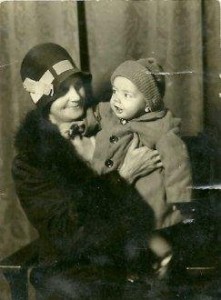 Mamma and Lloyd. This photo was taken when Thea and Lloyd visited her father, Erik August Holmlund in California in 1929

Although my paternal grandmother had an entire baseball team of boys to choose from, I do believe that my Daddy was her favourite son and from what I understand, Anna was one big, tough Swedish woman. Apparently when the twins – my father Peter and his brother Paul – were born she said, “Paul belongs to the old man, but Peter is mine.” Not only did Mamma live in the same house as her mother-in-law but some of the brothers-in-law also lived there as well and the house was very small (maybe 600 sq. ft. at the most).

Grandma was mean to Mamma. She thought that the Swedish Mamma spoke from Northern Sweden was inferior to the Swedish from South Sweden and held that over Mamma’s head. There was nothing Mamma could do to please the old lady.

Mamma was a very quiet, caring, loving person. She made everyone welcome to our home.  When relatives came from far and wide they always wanted to stay at our house. Even the “cave man” that lived down by the river would come to our house because he knew he would get a meal.

Mamma liked to talk on the phone (me too) and would talk to the neighbours in Swedish and Norwegian if the caller wasn’t comfortable with English. Mamma was a good cook. There have been many who have tried but few have succeeded in making brown bread as good as Mamma’s. Perhaps it was because we raised our own beef and there were no additives added to their food that our beef tasted so good. I have never had any beef ribs that were better than what we had at home. Never, and that’s been nearly a lifetime of trying.

Mamma loved her soap programs on the radio. One was on around 10 am., perhaps called Big Sister and at 1:00 -2:00 p.m. was an hour of soaps. As a young child I remember having a nap with Mamma after Ma Perkins was over. 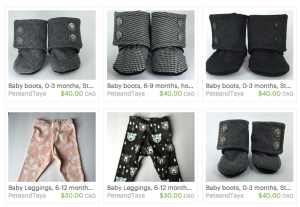 Mamma was also talented in several other ways. She could play the guitar, accordion and the mandolin, loved gardening, and was a great seamstress, quilter, crocheter and rug maker too. My niece Heather Martineau, my brother Gerald and his wife Dorothy’s youngest daughter, paid a great homage to both my parents when she set up an online presence where she sells booties and clothes for infants. She named it Pete & Taya – Pete being my father and Taya (Thea) being my mom. Heather told me, “I would have called it ‘Pete & Thea’ but I wasn’t sure people would pronounce Grandma’s name properly, so I spelled it like it sounded.” In addition to having a Facebook presence, Heather started an Etsy Shop a couple of weeks ago. Her merchandise looks great, and fun and I absolutely love the logo. Well done, Heather! 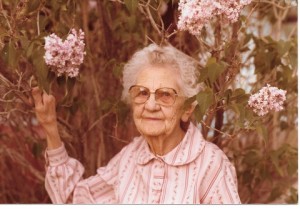 My Mom once told me when she was in her 90’s that the reason she didn’t have problems with her nerves or depression was because she had suffered the loss of her son in 1936 and that had made her strong. That was my brother Lloyd who had pneumonia and then scarlet fever. He died in 1936. I can’t say that I remember him at all but apparently he was the sunshine in the family while he was alive. It was said that he was a fun loving boy with a smile on his face all the time. Lloyd was so sick that Dad went to get the doctor in Loreburn, Dr. Monkman. After  Lloyd died, the house was quarantined and sprayed with formaldehyde. Gerald said that we never had any bedbugs after that.