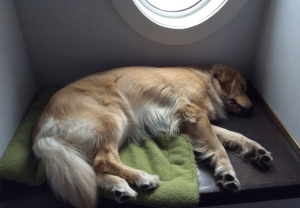 Genie – sleeping by the door

I turned the TV on to watch the news and check out the weather this morning. Apparently there is snow and rain to the north and east of us and warm air to the south which has a blanket of fog over our city.  How dull it is!
But I have a fireplace to keep my fingers warm as I write about dogs. 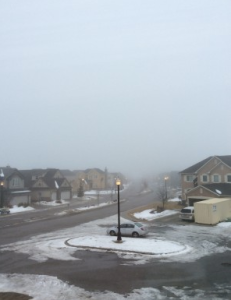 Foggy day in the neighbourhood

It was February 12 and I was dog sitting Bridget’s dog, Genie.  The family was on vacation and she had been staying with Bob and Anne’s since February 4th.  Anne and later, her husband Bob was there to feed her and walk her but if you asked Genie who she was staying with, she’d tell you she was staying with Bob and Anne’s dog, Nellie.  An older Golden Retriever is Nellie and, perhaps wiser than Genie, but most of all, she’s really good company. Everything went well with the stay at Anne and Bob’s with the exception of a few slippery places on the walks.  The temperatures have been so high the snow is not just melting but there are icy patches as well.

The reason I was dog sitting the last three days with Genie was because Bob and Anne were taking a play structure and a new puppy to their daughter Jenny’s in B.C.   And would be gone the weekend. I welcomed the chance to spend time with Genie.

Anne brought Genie to her home early Friday morning.  She was exhausted and so was Genie. 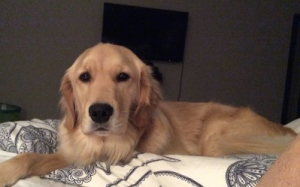 Bob brought the puppy with him when he came home last evening, the pup being a pup had not been trained, or ever away from its mother before.  So it cried and cried and cried.  After umany hours of no sleeping for anyone in the entire household, Anne put Genie in with the pup in the mud room.

Genie and I had three great days together. The first day Genie was tired.

She did sleep quite a bit on day one but after that she was by my side most of the time.  She loves to sit on the window seat by the front door to watch the goings on outside.  Then she would decide she wanted to go outside and come running to the deck door.  I would let her out and she would sit just outside the door.  I soon knew this trick…it is to get a treat if she comes in!

On the third day at noon I went out on the deck and called her, “treats Genie”.  NO sign of her.  I ran out the front door to see if the gate to the back yard was open.  It was quite windy and I guess the wind had blown the gate open.  My heart skipped a few beats and then I saw her sitting on the grass with a lady.  The lady lives in the neighbourhood and was familiar with Genie but thought she lived next door.  She was so concerned because my neighbours were not home and I convinced her that Genie lived in this house.   OH how happy I was to see her and I promptly found a leash to tie the gate so the wind would not blow it open again!

Dogs are wonderful pets.  I never knew the love of a dog until River.  We had dogs when I was a kid and even had dogs after I was married but River was family.  River was an inside dog and was allowed free range of the house.  She wold sleep anywhere – even on top of the bed. When I stayed at her home she would sleep cuddled up to my back on my bed and keep me cosy and warm. 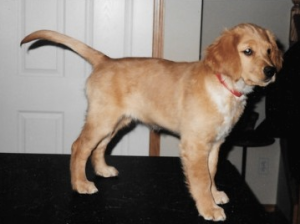 River as a puppy

She loved everybody.  When she came to my place she would immediately go out on the deck and tell the world that she was there to protect me.  Just three barks, thank you very much.  River was not what you would called “trained” but everyone loved her. Maybe it was that she was just a little naughty, just like her owner, my daughter Bridget!

And then there was Yardley, my daughter Colleen’s Jack Russell Terrier.  Yardley was one-of-a-kind. He absolutely LOVED Colleen but didn’t care much for the rest of the world.  He was fast, his little legs just scrambling as he went going here, there, everywhere.  He had a kennel and he loved his kennel.  It was so small he could just barely get himself inside it, but that was the “nest” he liked.  He seemed to really love the words  “go to your nest Yardley” and he would rush to tuck himself inside his kennel. 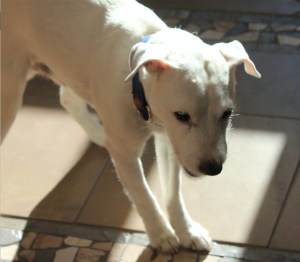 Yardley liked to sleep under the covers on my bed when I would visit. He actually slept inside the bend in my knees.  And when he heard Colleen downstairs early in the morning he bolted for the door of my room and high tailed it down to Colleen’s side.

There is no love that compares to the love of a dog.  No matter what kind of a bad day you have had, when you come home and open the door, there is your dog with love for you.  Nothing compares with such a greeting.  It matters naught if you have been gone for an hour or seven days you will get the same reception.  Pure love.