I introduced you to my paternal grandmother, Anna Sten, in the first story I posted about The Swedish Pioneers, a story called “The Night My Grandmother Died“. After writing about the bullying my brother Jim went through as a child, I decided I had to revisit Anna Sten’s story once again because she had such an impact on my mother – and not in the best of ways.  She treated my mother like a second class citizen, and for over two decades while those two women lived under the same roof, she and my Daddy, Peter, ruled the roost. His good natured bride, Thea Holmlund, had baby after baby, ran the household and did as she was asked, never complaining.

If I look at how Anna Elizabet Sten’s (Elizabeth was spelled without an “h” and they were “Sten’s” before they became the more anglicized “Stone’s”) life played out, it wasn’t what anyone would call easy. That’s not giving her any excuses for being mean to my Mamma. But I thought that a glimpse into her life could show you what a woman’s life was like back then, you can also see how death made such a big impact on the family.

According to World Life Expectancy, Sweden now ranks 14th for longevity, Canada ranks 12th and Japan ranks 1st. At 14th, Swedish men are now expected to live to 79.9 years, 83.6 years for women. Today, just like in the 1840’s, around the time my great grandparents were born, coronary heart disease is the number one killer.

Life Expectancy was Not Very Long

As we all know, life expectancy has improved massively in the past 175 years, and for Swedes, that number has nearly tripled. Both of my paternal grandmother’s parents had very short lives, certainly by today’s standards. Anna Sten’s father, Eric Gustav Åsberg, died when he was just 32, leaving her mother, Ana Casje Arosell, to raise Anna and her two sisters singlehandedly.

Ana Arosell soon found another man, Karl Gustav Berg, and they were married within a year of her first husband’s death. Unfortunately, that union was short lived too.

That’s because Ana Berg died four years later, when she was just 34 – but not before giving Karl Berg two sons and a daughter. I don’t know how she died, but 30% of women in Sweden died in the mid-1850’s due to childbirth complications, so that may have been why.

Now responsible for a large brood of six children, Karl Berg was on the lookout for a new wife and he found one in Per Sten’s oldest sister, which is rather significant because later, Anna eventually marries Per Sten, her very own uncle, through marriage. The Sten-Bergs also have a son, Karl Johan Berg, and as a 17-year-old, he becomes the first in the family to emigrate to the USA, in 1883.

Anna married Peter Ekstrum when he was 30 and she was 21. Their first child, Lars Peter, was also born in 1872 and less than two years later, they were blessed with a little girl, Brita Elizabeth.

And then Pete Ekstrom died, leaving Anna, a widow with two children to raise. Like her mother, on her own.

Anna landed on her feet and met and married Persjon Sten in 1876 and an assembly line of male babies started coming straight away. Although Per was trained as a tailor, he had a dream of being a farmer, of owning his own farm far across the Atlantic Ocean in the United States of America. There was a lot of land there, he’d heard that from the land men who’d been sent out to lure prospective Swedish immigrants to settle in the new country. 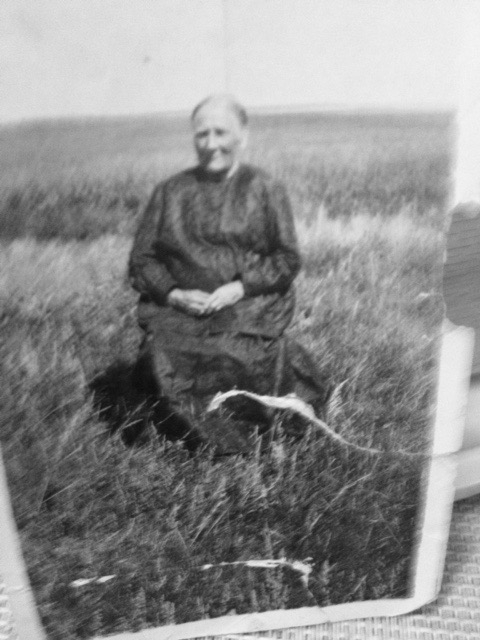 Grandma Anna Stone sitting on a rock down in the pasture. We called the rock “Grandma’s Resting Rock”

Many Swedes he knew had already packed up and sold their possessions and bought one-way tickets to a place with distinctly non-Swedish sounding names, like his brother-in-law, Karl Johan Berg.. The Stens decided they had no choice but to take a chance on that tremendous opportunity. And so, in 1892, their passage to America was booked on a cargo ship. On they got, all eleven of them: Anna and Per, with Lars Peter Ekstom, Brita Elizabet Ekstrom, Henrik Sten, Axel Sten, Dave Sten, Frank Sten, Nils Sten and the two-year-old twins, Peter (my father) and Paul.

After moving to the USA, Per and Anna had two more sons, bringing the total of children she’d had with Per to nine – an entire baseball team of their own! Unfortunately, Joel died when he was just a year old, and Nils died when he was seven. They sold their land in Minnesota and headed to Saskatchewan to homestead on the land where I and all my brothers and sisters would eventually be born.

In December of 1907, just months shy of proving up on his homestead claim, Per Sten had a massive heart attack and died. Anna, a widow once again, had three boys still at home and a farm to run. She put in a request for the homestead to be transferred to her name, but was told that, as a woman, she would need to refile and go through the homestead process all over again – a process that took three years.

In 1909, her second-eldest son, Axel, homesteading on the adjacent quarter section of land, died, probably from smallpox. His land went to his mother.

In 1910, Anna Sten finally “proved up” – showing she’d been farming the land, had a house on it and had been living there. She got the title for Per Sten’s original homestead put into her name. With the land she’d inherited from Axel, she now had a half-section of land. With Dave and Frank homesteading in the area, the twins and Charlie still at home, most of Anna’s boys were close to home. 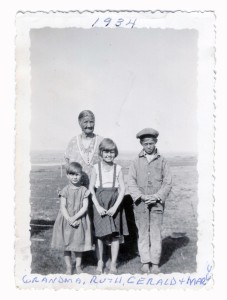 When my father, Peter, married my mother, Thea, the couple remained in the Stone family home. Anna didn’t like my mother’s northern accent when she spoke Swedish and found it to be low class and repeatedly tried to correct her. She might also have been jealous that my mother could speak English in addition to Swedish, something she could not do, which meant she had a much more social life than Anna had.

It was after Anna Sten died that my mother began to take on a leadership role within the family, having been kept down for years by her mother-in-law.