In the 12 years since the Stens had emigrated to the USA from Sweden, many things had changed. When the family first arrived in Minnesota in 1892, they lived with cousins, the Wallins, who had already filed for a homestead in Warren, and Per and the boys helped them farm. 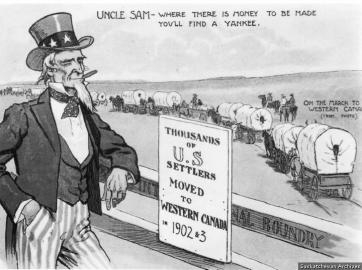 Then the family got homestead land of their own near Roseau, 81 miles away. By 1902, Per Sten had three-quarters of a section of land, but the pull of Canada was gnawing at him.

Moving wasn’t the only thing that was new, either. Anna had given birth to their youngest boy, Charlie in 1898, and that same year their eldest, Henrik, joined the military and fought for his country in the 10-week long Spanish-American War.

But all wasn’t quite as it should be. Anna and Per had lost two other sons: Joel Reuben (1) died in 1893 and more recently 7-year-old Nils Robert died in 1904. There are indications there may have been tuberculosis in the family and without the antibiotics that can cure TB today, an arid, dry climate seemed to help people suffering from the disease. The experts were recommending Arizona and Canada’s District of Assiniboia, in an area that used to form part of what had been known as the Great American Desert on maps just 50 years before.

By July, 1904 Per Sten was convinced the land of plenty in Canada was where his family needed to be, and the patriarch wanted to see it for himself. He took his second-eldest son, Axel, with him, who was old enough to be able to put in a homestead claim on his own, and off they went to Davidson, by train.

On arriving in Davidson, their first stop was at the McGregor Land Titles Office.

They were given a plat map that outlined the land that had been taken, and what was still available. Per and Axel hitched a ride with a couple of “Scotchmen” as they called themselves who were headed 38 miles out to look at some land just south of what would soon become Elbow. The Scots tried to convince Per of the worthiness of the land there, but Per had other ideas. Not only did he want to be close to his old friend, Edgar Book, but the Swede put a high value on being close to water. Per Sten was intent on a homestead near the banks of the South Saskatchewan River.

Which is exactly where they were headed. After a day’s drive with horse and buggy, they arrived at the Book homestead, about a 30-mile trip, where they were welcomed with a hot meal and spent the night.

Down by the Riverside

The next morning, armed with the plat, my grandfather and uncle were off on foot to look at all the available sections in the area down by the riverside. After much walking – and looking – they decided on Section 6 Township 27 Range 6 West of the 3rd Meridian, land close to the banks of the South Saskatchewan River. They returned to the Land Titles Office to file and found that the plat wasn’t exactly correct: the entire section wasn’t available, just the north half of it. So before leaving for Minnesota once again, Per claimed the NW ¼ and Axel claimed the NE ¼, promising to return the next spring to begin working their land.

Over the winter, the men kept busy, hauling their equipment to storage near the nearest train station, in preparation for their 1905 departure. Karlstad was a 50-mile journey, and Per knew he’d have a boxcar of his own for all their equipment, livestock and household goods. Choices needed to be made as to what would go and what would need to be sold.

They opted to sell a bull and a steer just before they left, and got $51. They later found out that cattle was a much needed commodity in Canada, and they could have sold them for $200 each if they’d just waited until they crossed the border.

On April 16, 1905, Per (62), Henry (27), Axel (25), Frank (20), and the twins, Peter and Paul (15) left Roseau with the cattle and household effects heading to Karlstad, accompanied by two other prospective settlers, Andrew and Johnny Anderson. About halfway to Karlstad they stopped at The Norwegian Roods (as my dad called them – they were originally from Norway and their last name was Rood), the home of friends of their’s. They put the cattle in a rail corral and the men and boys slept on the floor.

The next day, arriving in Karlstad they met up with my grandmother, Anna and the youngest boy, Charlie, who had been brought to town by buggy with another neighbour, Kristian Larson. Per and Anna spent that night at an inn called “The Murdered Widows” and the boys slept in a barn.

They spent the following day loading boxcar #54342. All the machinery and household effects were put in one end, and four horses and five head of cattle in the other. A John Deere wood-beam breaking plow, a binder, harrows, mower, rake and wagon accounted for most of the machinery. As for household effects, there was a stove, and a homemade sofa bed.

After crossing the border into Canada, most of the family boarded a passenger train to Regina, which arrived there on April 20. Henry and Axel stayed behind in the boxcar, minding the livestock. There had been “Immigration Halls” set up throughout the District of Assiniboia to provide free temporary lodging to the settlers making their way to a homestead, and the Stens spent the night at the Immigration Hall in Regina. At 9:00 the next morning they boarded a train for Davidson, 90 miles away, and arrived at 4:30 that afternoon.

Then the wait began for Henry and Axel – and boxcar #54342 and all the worldly possessions it contained. They spent the next two nervous nights at the Immigration Hall in Davidson, waiting for that freight train to arrive. Two days later, the train arrived. Everything – the boys, the livestock and their possessions were intact.

They unloaded the boxcar on a vacant lot and put the livestock into the complimentary livery for the night. It was April 24th, 1905, the weather was nice and seemed like a good omen. The Sten men and the Anderson brothers would be heading out in the morning. Time to get some rest.