The only memory I have of my grandmother was when she was already dead.

The night before she died, however, Anna Stone made a last request which my uncles, aunts and parents would recount to us, our cousins – and others – for as long as they, themselves, would live. And since there are few of us left, I thought I should pass it on to you before there’s no one left to tell. 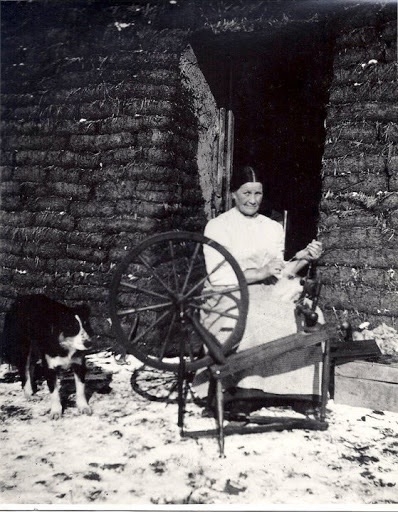 Anna asked all of her children living in the vicinity of her homestead at NW 6-27-6 W3 to come to visit her at her bedside so she could bid them a final farewell.

Those children were her children, but were no longer children, at least compared to the 3-year old I was. Anna was 86 the night she made her final request – her youngest child, Charlie, was now 39. It wasn’t that the old woman’s request was hard to fulfill: of the ones who were left, by this time most of her boys and their wives were living on farms near by. Four of the ten sons and one daughter she’d brought into the world had already died; her three oldest were out of reach, having opted to stay in the US when the family immigrated from Minnesota to Canada in 1905.

As for our family, the “Peter Stone’s”, as we were known, well, we had lived with Grandmother always, so going to see her was not extraordinary. My mother, Thea, wearing a smoky blue silk dress, had married my dad in 1916 and right after the ceremony, he brought her home to live with his Mama and close to half a dozen of his brothers, all of whom preferred playing baseball than doing any farm work. Thea was put to work right away and despite being a capable cook, gardener, cleaner, quilter and seamstress, was put far down in the Stone family’s hierarchy as far as the pecking order went. First came Anna, then Peter and the rest of the boys, and finally Thea.

When Peter’s twin brother, Paul, decided to marry my mother’s younger sister two years later, Peter and Thea were already beginning to populate the world with what would turn out to be ten children. The small house wasn’t large enough for all the people already in it, and it would certainly not be able to keep another family.

So my dad ordered a prefabricated house from the Eaton’s catalog and got it set up on the land Paul was homesteading. Paul and Beda moved into it on their wedding day.

As for Grandmother’s request, the family heeded her call.

It’s Time for Me to Go

“It’s time for me to go,” she told them in Swedish. Then she offered her hand for one last brisk handshake.

The next day, she was, indeed, gone, and laid-out in a casket in our living room for friends and family to come and pay their final respects. I remember seeing her. She looked dead. I was scared to touch her.

My dad said that Grandmother loved him the most and perhaps that’s why he was given the title to her homestead when she passed away. That plot of land, riddled with coulees as it was, was not the best land on the Saskatchewan prairies, but it was a title and the inheritance caused jealousy nevertheless.