The Welcome Board at the Sky Dome in 1989 for the matchup between the Saskatchewan Roughriders and the Hamilton Tiger Cats.

Appearances by the Saskatchewan Roughriders in the finals were few and far between. After winning the Grey Cup in 1966, beating the Ottawa Roughriders 29-14, their appearances in the final were spotty. Although I didn’t have seasons tickets to the games anymore (except for one year when we won the tickets) it didn’t mean I ever stopped being an avid fan.

In 1989, the Riders were in third place after the regular season.  They were certainly the underdogs to win the Western Division.  We were all so excited when they won the game over the Calgary Stampeders and went on to play against the division leaders, the Edmonton Eskimos.  After a nail-biting win of 32-21 over the Eskimos, the Riders were headed to the Grey Cup.

Headed to the Grey Cup

The CFL’s Eastern Division’s Hamilton Tiger Cats had won the East and the matchup against the Saskatchewan Roughriders would take place in Toronto, Ontario on November 26th, 1989.

I was at work on the Friday morning when word came out that there was another airline flight added to take more fans from Regina to Toronto for the game. We knew that all the good seats in the stadium had been sold, but anyone going on that flight would be given seats on the 10 yard line.

I had never been to a Grey Cup game when the Riders were playing so I knew this might be the BEST or maybe the ONLY chance I would ever get to go. 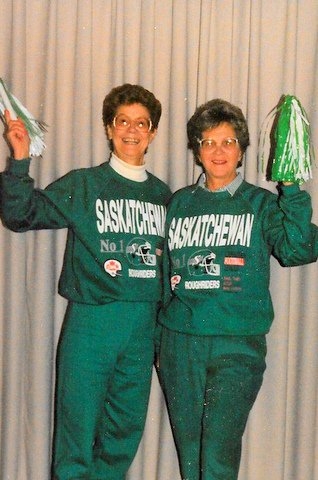 Marjorie and Maureen ready to cheer on the team.

I called Marjorie — the sister I had lived with when I first came to Regina, the one I first bought season tickets with — and she was game to go!

Our flight left just after midnight and five hours later we were in our hotel. It wasn’t long before we were marching with a contingent of Rider fans in the Grey Cup Parade.  We then took a tour of Maple Leaf Gardens, the original home of the NHL team the Toronto Maple Leafs, and then it was off to the game.

The newly opened Sky-Dome was not exactly a “sea of green” as you would see at a home game in Regina, but there was a huge number of Rider fans in attendance. We didn’t know it yet, but one of the best games in the history of the CFL was about to begin.  Fifteen Grey Cup records were either tied or broken during the game and most notably of all of these was the highest total points for both teams in one game. 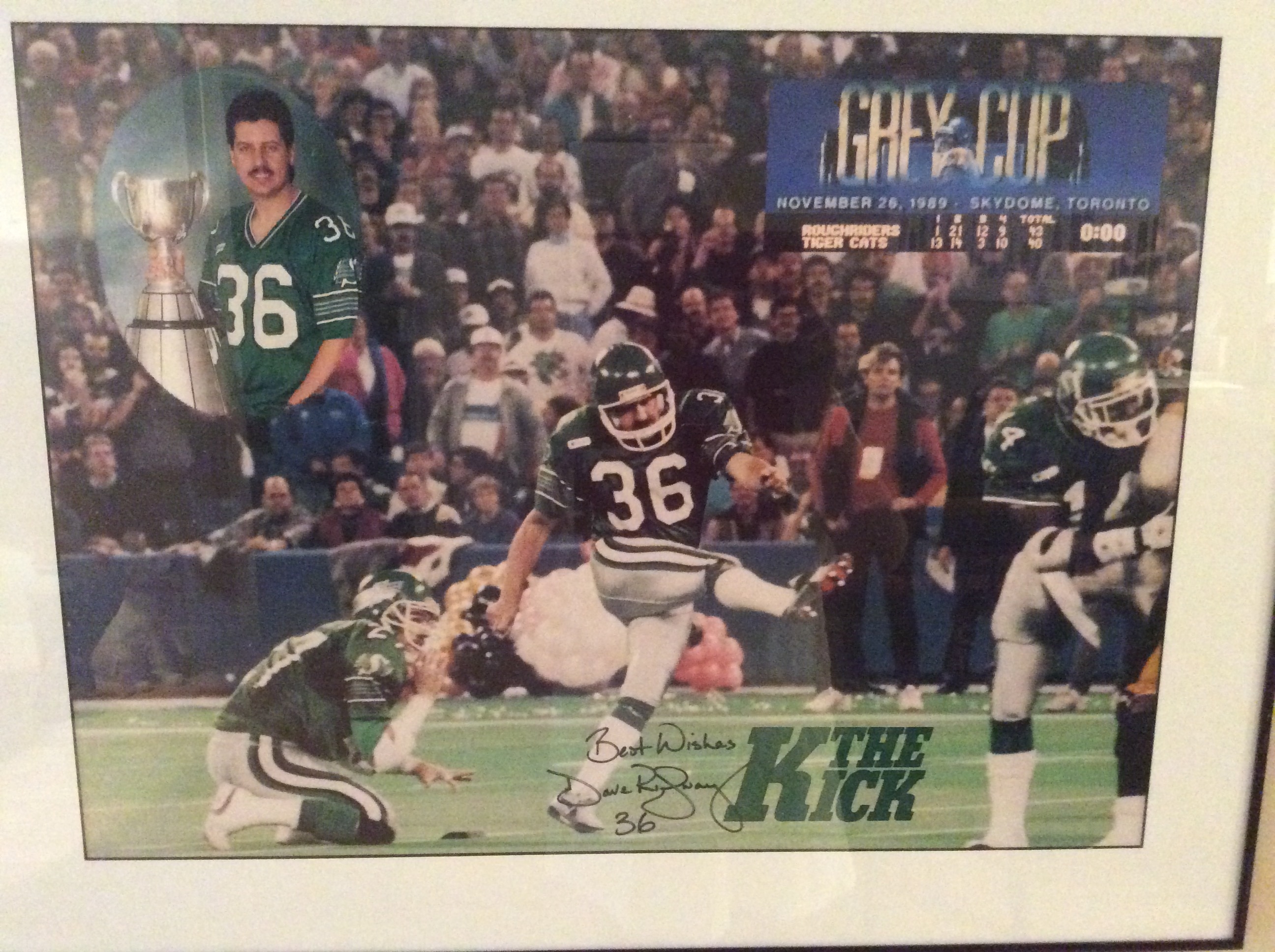 Saskatchewan’s quarterback, Kent Austin, was right on that day, and won the Outstanding Offensive Player of the Game award.

What a game! It was back and forth and forth and back again and, would you believe –  Hamilton tied the game 40-40 with just 44 seconds remaining?

The Riders put together a remarkable drive to the Hamilton 35-yard line and Dave Ridgeway kicked a field goal with just two seconds remaining.  The end was in sight and the Riders and their fans were ecstatic with the 43-40 victory!

Since 1989, the Saskatchewan Roughriders have won the Grey Cup twice, once in 2007 and again in 2013. In 2013, the game was played at the Rider’s home field, Mosaic Stadium.  This was only the second time a western-based CFL team has won the Grey Cup at home. It was indeed a “sea of green” at its finest as the stadium was filled to overcapacity with Rider fans.

The days were over of going to a game in just an ordinary jacket or sweater.  Almost all the fans had donned their Saskatchewan Roughrider jerseys, many with their own name, or the name of their favourite player from over the years on the back.  How much fun it was for us fans to have this win of 45-23 over the Hamilton Tiger Cats. BAM!

I didn’t go to that game, I was in Calgary, staying with two of my grandchildren while their parents went to the game. But watching the game on TV was nearly as much fun: we danced around the kitchen island every time the Riders scored.

I watch all CFL games on TV and every once in a while, I’ll go to a game here in Calgary when the Riders are in town.