Nobody ever said that packing up the cottage for the last time would be easy.

There is so much to do and so little time to do it! Well there might be more time if we were not so busy doing other things – like golfing, shopping and, occasionally, stopping to eat! There have also been times when people have stopped by to have a coffee with us and a visit, which is great, but now, with our Sunday departure looming large, it’s crunch time! 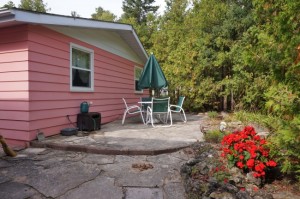 Grosfillex chairs outside the cottage

We have made a valiant attempt to make sure everything is clean. There were cushions for the game table’s chairs and cushions for the Grosfillex chairs on the patio. These were washed with care and hung to dry on the clothesline (washed by hand no less)! The windows were washed inside and out and the top panes were washed by the two gals that were hired. These two gals also vacuumed the furniture in the living room and the porch. The BBQ had to be cleaned, as well as all the outside furniture.

Perhaps it would have been easier if the cottage had not been for sale all-in or as advertised, fully-furnished. If that had been the case, we would have HAD to take everything out of the house and the shed.  Now the hard part is deciding what to take for her home in Sun City, Arizona – what to leave here and what we should take to the charity bins. We have to decide which quilts to take or leave. There are paintings in a variety of sizes, from the very large to a number of 8×5’s. 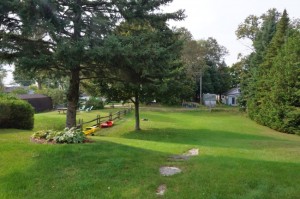 The kayaks along the fence at Ruth’s cottage

Leaving memorabilia behind is the hardest part for Ruth. She has had so many years of fun here and even leaving the hammock and two (almost brand new) kayaks will be very hard for her. Ruth’s brother Mike has been – and will be – the recipient of many things left behind. On Saturday, he’ll be here to pick up some treasure from the shed.

I have played the role of the mini-hawk, stopping Ruth from taking things that are too heavy or can be replaced at a consignment store in Sun City. But there have been some exceptions.Ruth had two beautiful hexagon wooden planters made locally by Ted Graper and she was bound and determined that they were going to be packed in the car. The only way the planters would fit was by putting it on the floor in the backseat on their sides, facing the front seats.

I managed to pack the car, and it’s packed to the rim with books, games, cards, tools, extension cords as well as many other collectibles. We have a waffle iron, an electric can opener, a coffee grinder and a tea pot ready for the trunk. Oh yes, Ruth has a tricycle-type golf cart that is wrapped in one of the duvets at the back of the trunk.

On Friday, we made the trip to the Salvation Army bin at Wiarton and on Saturday we will wash the bedding and towels, pack our suitcases and be ready to roll on Sunday. Oh, yes we have a farewell party for us to go to at Ted and Maureen Grapers’ home on Saturday afternoon.

Mornings here are absolutely wonderful. It is so quiet and there are actually a few robins and chipmunks in the yard to keep me company. This morning I was awake at 6:00 a.m. and I hit the shower while the coffee was brewing. Coffee on the patio was so peaceful. You can hear the waves from Lake Huron slapping against the shore from where I was sitting, and this morning it was just a slight rustle.

Mike came by with The Globe and Mail so we were able to catch up on the world news. I don’t subscribe to a paper at home but I go online to read, like the Calgary Herald and the Regina Leader Post. 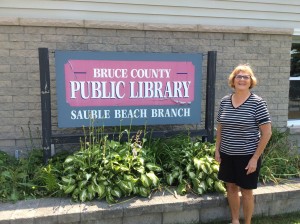 Me in front of my main Wi-Fi hotspot, the Sauble Beach Public Library

I just finished washing the BBQ cover and Ruth has now finished the last of the laundry at the laundromat. We also have washed our clothes by hand and they are drying on the clothesline! You might think that’s something normal for an 80-year-old woman to be doing, but truthfully, the last time I did something like that was when I was a girl, helping my mother with the laundry

Mike is now cooking the bacon on the BBQ and the eggs will soon be in the pan and I’m slipping out to the Sauble Beach branch of the Bruce County Public Library to use their Wi-Fi connection to get this posted. The picture was taken by a man named Rory, and I took a picture of him and his son Michael and have posted it to thank them for their kindness in helping me out.

Sadly, this will probably be my last post from Sauble Beach, Ontario. It has been a wonderful time, I’ve met some great people and played golf at some excellent golf courses, done some great shopping, eaten some great meals, and had a lot of fun exploring cottage country with my friend Ruth. Thanks to everyone for making our visit so welcoming and memorable.