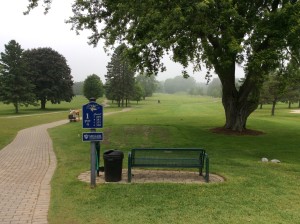 You can see the Lake Huron fog in the distance.

It was the first day of summer and, as we left the cottage for our 9:12 a.m. tee time, I would never have imagined we’d be golfing in the Lake Huron fog. The sun was shining brightly and the drive down Highway 21 and then Highway 3 to the Saugeen Golf Club was beautiful.  The highways are tree-lined with large maple and birch, and from time to time, you see the entrances to the many cottages that dot the community of Sauble Beach. You can actually see the massive Lake Huron through the trees in many places, although sometimes those views are blocked by the ‘For Sale’ signs!  This is the time of year most sellers are showing off their property to prospective buyers, just as my friend Ruth is doing this year.  Hopefully, some buyer will see the sign or the listing for Ruth’s cottage and make her an oWe allowed plenty of time to hit some balls at the range so we arrived at Saugeen around 8:30 a.m.  I was excited to golf the course, as it was designed by renowned golf course architect, Toronto’s Stanley Thompson (1893-1953). I have golfed a good collection of Stanley Thompson golf courses, and it’s always a pleasure to golf on a track designed by Canada’s most prolific golf course architect. Thompson designed 144 courses in Canada, 26 in the US and 8 in South America between 1912 and 1953. His influence on golf courses in undeniable — he was a founding member of the American Society of Golf Course Architects and his style and philosophy was handed down to many other now-famous golf course architects including Robert Trent Jones. In addition, a society founded in his honour in 1998, the Stanley Thompson Society, is dedicated to preserving Thompson’s vision on his Canadian courses. This is especially important as many of those courses are now entering their centennial years. Saugeen Golf Club, itself, is celebrating its 90th anniversary year this year! 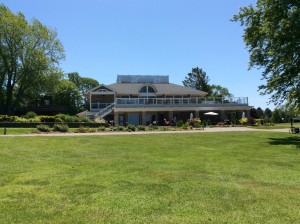 With the Saugeen clubhouse, Thompson’s architectural wizardry shines through with a spectacular second floor deck that lets bystanders watch the incoming golfers on the Legacy course.  There are many flower beds you know will be in full bloom soon.

There are three 9-hole courses at the Saugeen: the Sunrise, Sunset and the club’s original nine, the Legacy. We played Sunrise and then Legacy. When we arrived at the first hole, the starter told us there was a single player ahead of us, she would be playing by herself and we would be next.  The thing is, all of a sudden the fog rolled in from Lake Huron and it became FOGGY, really foggy.  We saw the single player, a woman, tee off and we watched as she disappeared into the Lake Huron fog about 125 yards down the fairway!

We waited a while longer and then hit our tee shots.  We couldn’t see our balls land but we saw them leave the tee, and both of them seemed to be in the general direction of the fairway.  We found them!  Before making our second shots, we saw the woman leave the green and then we never saw her again, she disappeared into the deep fog!

As we continued our play, the fog started to clear over the next few holes. By the 5th hole, the sun came out, burning away the fog, and it stayed out for the rest of our game. We played pretty well — but neither of us had a birdie, but what a great course it was!

We checked out the menu at the grill at Rickard’s and opted to stay for lunch.  We were waited on by Kera and she was full of fun! The final verdict: Saugeen Golf Club was awesome: the course was great and the food was good. In fact, we liked it so much that we’ve booked a returning tee time for Friday! 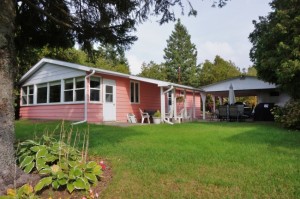 Ruth dropped me off at the Sauble Dunes Bar and Grill after golf so I could watch some of the U.S. Open since we don’t have television at the cottage, and I love watching golf on TV.  This was the first time I have gone to a bar alone in my life!  There were a couple of guys at the bar and I had the viewing area for the golf to myself.  After watching the Open play out, I’ve got to say that I’m not keen to play that Chambers Bay course.  It looks really tough!  Ruth went home and did some more clean up in the yard and planted some flowers to make her cottage the prettiest one in the neighbourhood! The cottage is listed by Amber Jenings of Peak Point Real Estate — she has showings this week and, fingers crossed, an offer will be coming in soon!