We woke up to bright sunshine and that made both of us happy! Thursday, it had been trying to rain at times and, grey and overcast, we ended up having just a few sprinkles. The sun came out for awhile around dinner time, so I was optimistic that we would have a sunny day for golf and a great day out.

Our tee time was 9:30 a.m. at the Sauble Golf and Country Club, a sixty-nine year old course teetering on the 6400 yard mark. When we arrived at the Pro Shop we were informed that they had a shotgun tournament starting at 1:00 p.m. We said that shouldn’t be a problem as we play fast.

The course had very nice, big greens with not a lot of undulation. The fairways were much the same, open and quite good and there was a varying degree of difficulty with the rough. In some places, the rough was really thick and other places, it was very thin! There were just a few gravel cart paths, most went from green to the next tee box. There were a couple of small lakes and several three-foot wide ditches with water going across the fairways, teasing you to hit your ball into them to add some drama to your round!

When we finished the par-5 seventh hole, we noticed what appeared several large rhubarb plants growing between the course and one of the neighbouring houses. Ruth said we must drive over see if if we can get some! Then we noticed the lady that lived there was outside, so we high tailed it over to her, and she was more than happy to cut some for us! We picked it up after finishing the ninth hole. I think that rhubarb apple crisp will be on our dessert menu tonight, perhaps with a scoop of vanilla ice cream!

The course was pretty empty and we finished in three hours. We enjoyed the golf course and, although it was a bit windy, we had fun! 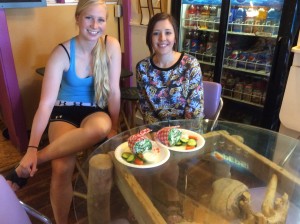 Two of the young women working at the Two Chicks Cafe.

Our next stop was Two Chicks Cafe on 2nd Avenue North, just a block away from the beach — and us two chicks thought it would be a great idea to drop in to have lunch there.

We had the pleasure of being waited on by Georgia McLay and Maranda Murphy, and those two young women were gracious enough to pose for a picture for the blog!  Great service, Georgia and Maranda — keep up the great work! 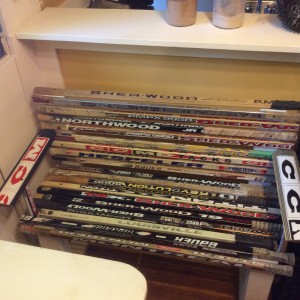 My chair at the Two Chicks Cafe was made out of hockey sticks. What a great idea for #recycling

The cafe is tiny with about six tables, but they also have outside seating. My chair was made of used hockey sticks and the base of the table was made from an old pedal sewing machine – such ingenious ways to recycle!

The Two Chicks Cafe has really good food and it’s run by great people. Stop by and enjoy the country music on radio — and I read on their website that they have a big lineup of live music on Thursday, Friday and Saturday nights ALL SUMMER LONG. What a great idea.

And I’m not the only one who thinks it’s a great place. I found this on Twitter:

Oh, and one more thing about this great cafe: they’ve got free Wi-Fi that was pretty fast, so I was able to write my blog post for you!