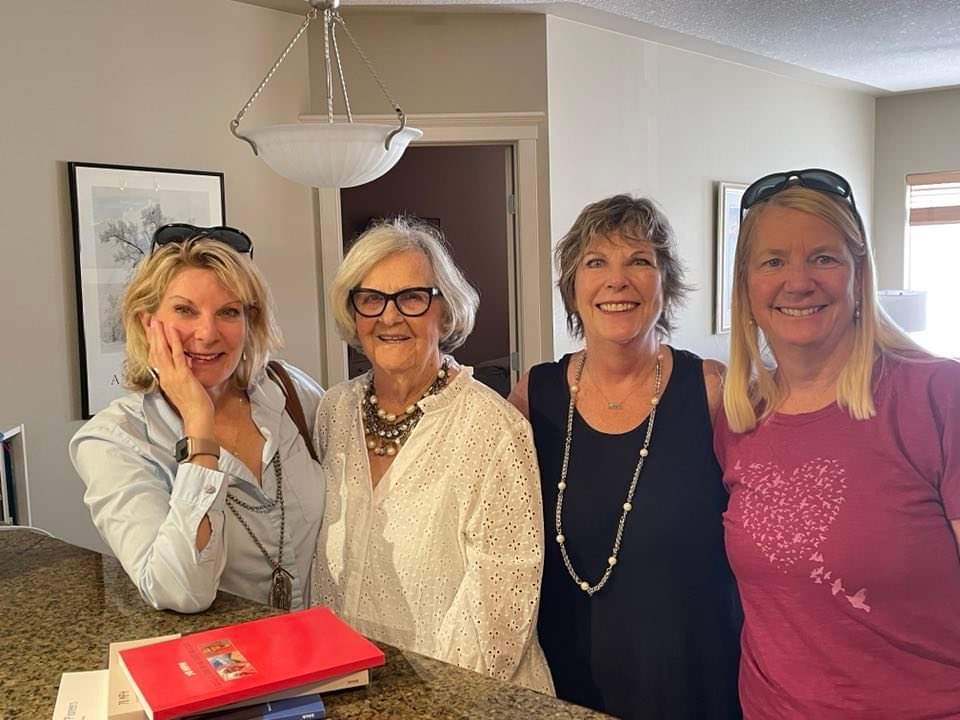 What seemed like a casual get together turned out to a surprisingly exceptional HAPPENING. A surprise of a totally different experience. You all know that you develop friendships and you spend time with them and their families.  Then you all age.  The kids grow up, perhaps your husband or their mother dies and you lose the relationship you had as years go by.

This is what happened with the O’Shea/Way families.

This reunion happens to be the side effect of the Covid 19 Pandemic.  A discussion about liver, bacon and onions on Facebook and my liking of this dish prompted Linda Foo to tell me the best place for this dish in Calgary was the Dog and Duck restaurant.  And when it was safe to do so, she would pick me up and take me there!

Linda’s sister Sheila has been my friend on Facebook told me she was coming to Calgary in August and would like to see my art work when she was here.  I sent a message to Linda that we hadn’t been for liver and onions and she said that when Sheila was here, we should go! Little did I know there was a Way wedding in August and the whole Way clan would be here in Calgary.  Linda called Monday morning to see if I could have lunch with five of them and I said, “for sure”.

Now the three sisters were quite young when they lived in Regina.  Of course I didn’t know much about their lives as they wouldn’t have known about the adult friends of their parents.  However they were so interested in hearing the stories I had to tell about those times in Regina.

How did we get to know Pat and Harlow?  Well, Harlow and I both worked for Imperial Oil Producing in the 1950’s – .1960’s.  There were many oil companies working out of Regina at that time and we worked hard and played hard.  There were leagues of curling, bowling, hockey, basketball and along with that were picnic and BBQ’s, dances and parties.  Hotel Saskatchewan held Dinner and Dance every Saturday night!  (A vivid description of the gowns the ladies wore and who was with who was in the Leader Post on Monday).

We became friends with the Way’s through Paul and Faye Christiansen.  After the Way’s returned to Alberta in 1967 we would go to Calgary…for at least three weddings!l

Now back in 1973 we asked Pat and Harlow to be Bridget Godparents.

And a picture of Pat and Bridget in Calgary

Here are a few notes from Cathy

“I remember Doc whittling ’Hooey Sticks’ for us, with a propeller on the end that he could make turn then change direction when he said ‘Hooey’.  Magic. Totally.

Now you can add that we still sing the “after you’ve been eating steak for awhile, cold beans taste fine!” song.

The four boys from the Way family want to get together with me for their rendition of days in Regina and Calgary. Another post may be coming.y

Surprises come in many ways (pun intended) but this surprise to me was how much a younger generation was interested in what a friend of their parents saw in their parents life.

You can read stories about the Way’s in a couple of posts I’ve published.  My love for water or not and Some friends of mine