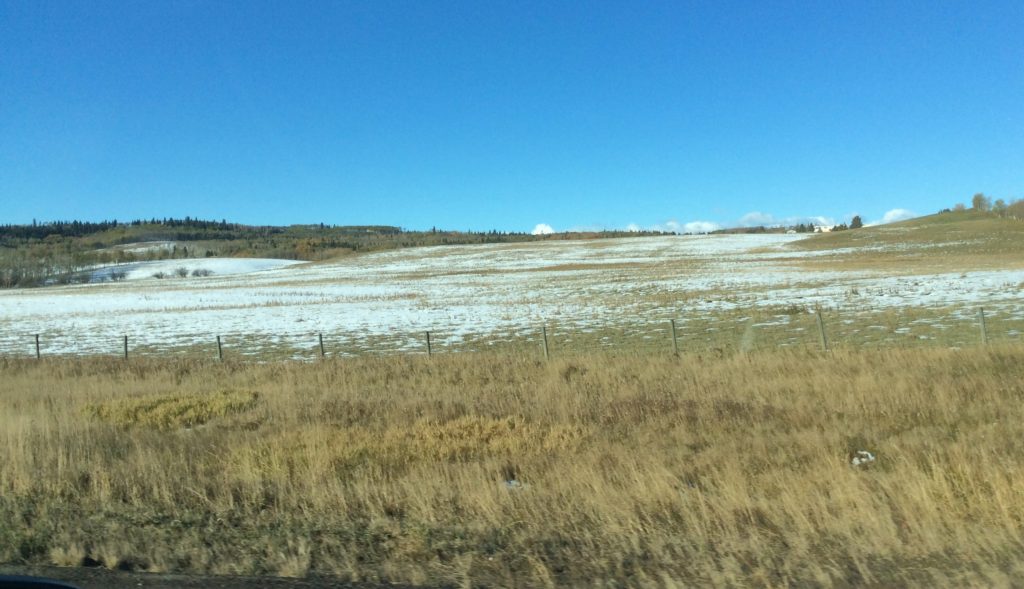 On a bright, sunny Friday morning, Colleen and I headed out to the Foothills.  Of course, when you put Black Diamond into the GPS, it wants you to go south on #2 Highway then west to Black Diamond. However, taking #8 Highway west and then #22 Highway south makes for a much more beautiful, photographic route.

So with two mugs of coffee we were on our way.

With a temperature of +5 C, the #8 Highway west was completely dry and it wasn’t until we were close to Bragg Creek that we noticed the temperature was close to +1 C and there was some frost on the highway.

Fast forward to the intersection of Highway 22 and Highway 7  there  was an SUV that had left the highway and was in the field in the southeast ditch of the intersection.  There was a woman outside the SUV and she was talking on her cell phone.  Colleen pulled over and asked her if she was OK and the woman said, “Yes — I have just called the tow truck. We’re stuck!”

We could tell as soon as we headed south on Highway 7 that there was more frost on the highway.  The car in the field probably hit some frost/black ice and slid off the highway.

ONWARD WE WENT AND SOON WE WERE IN TURNER VALLEY 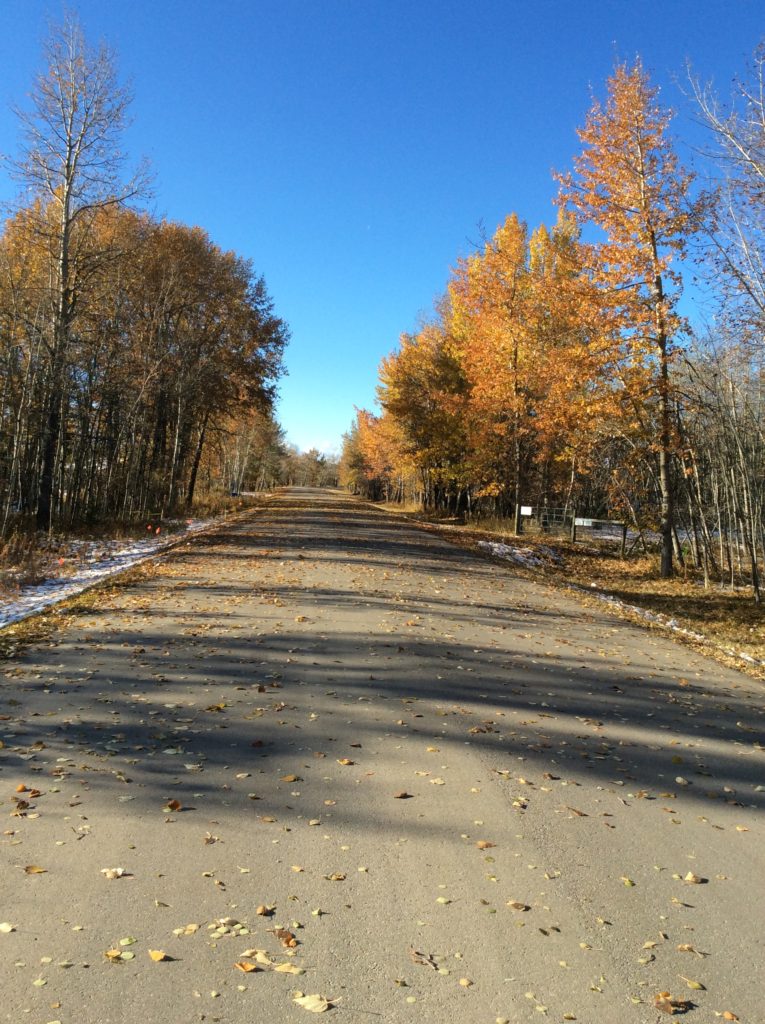 Instead of taking the left turn to the east at the 4-way Stop, we continued south on a street that proceeded south west with a “no exit” sign. We were hunting for valley views! 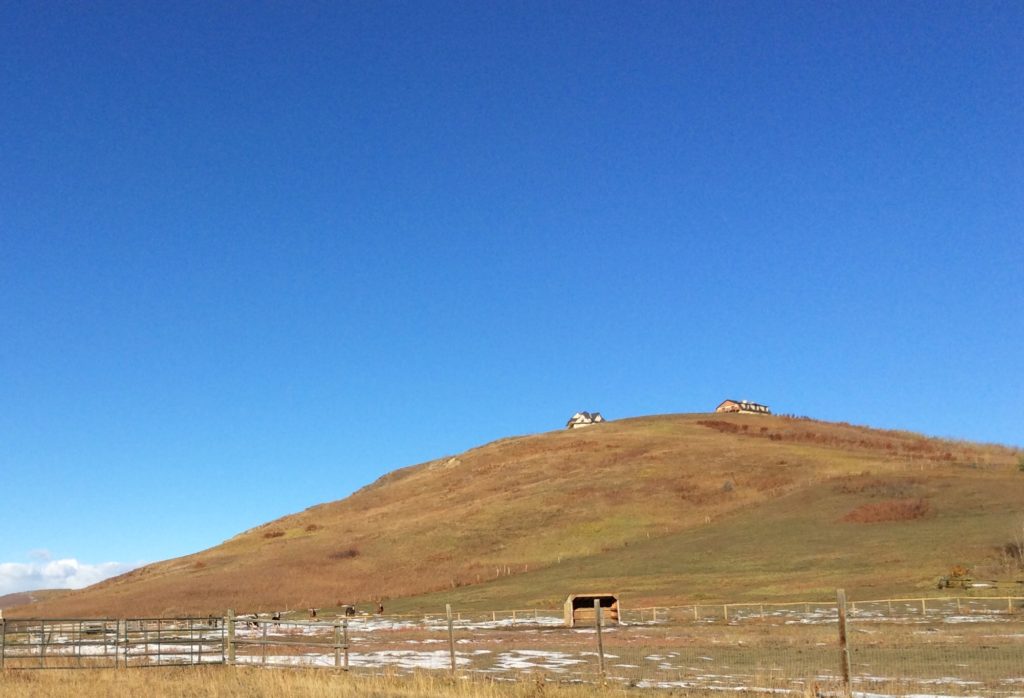 We followed this street for a couple of kilometers and to the right was this huge hill with the two buildings (one is a house) at the top of the hill.  The occupants must have a fantastic view of the mountains to the west, not to mention the entire Turner Valley below.

We proceeded from Turner Valley to Black Diamond. We stopped to talk to two high school girls taking photos with the latest SLR cameras. I asked them what was the occasion that they were photographing. 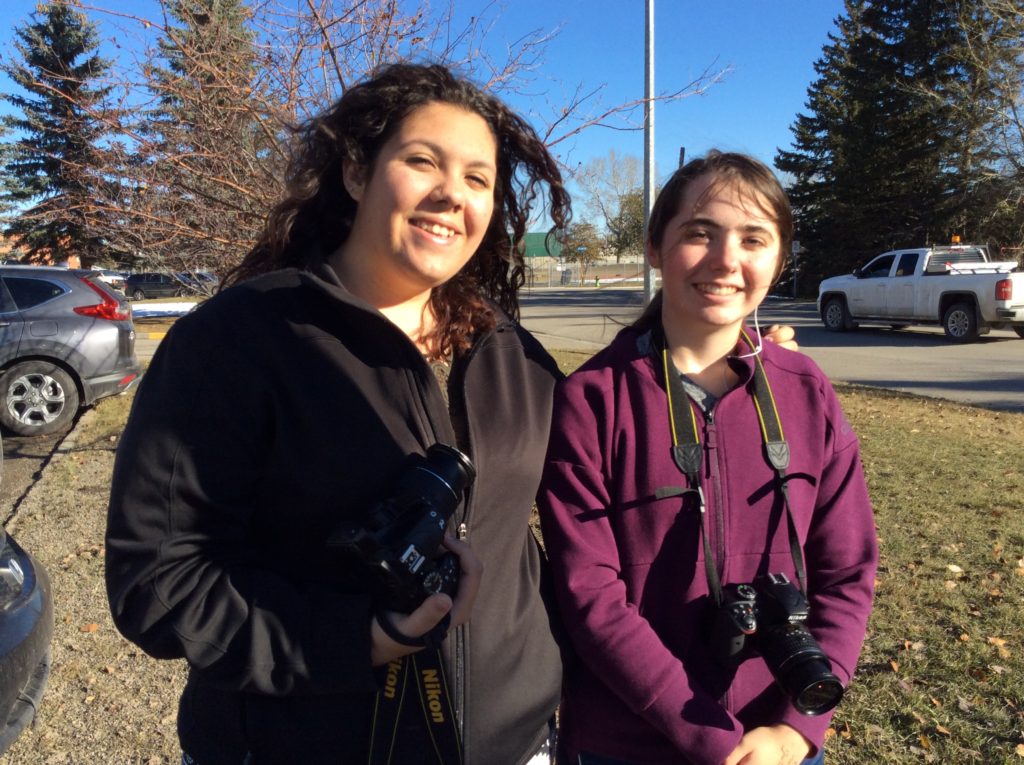 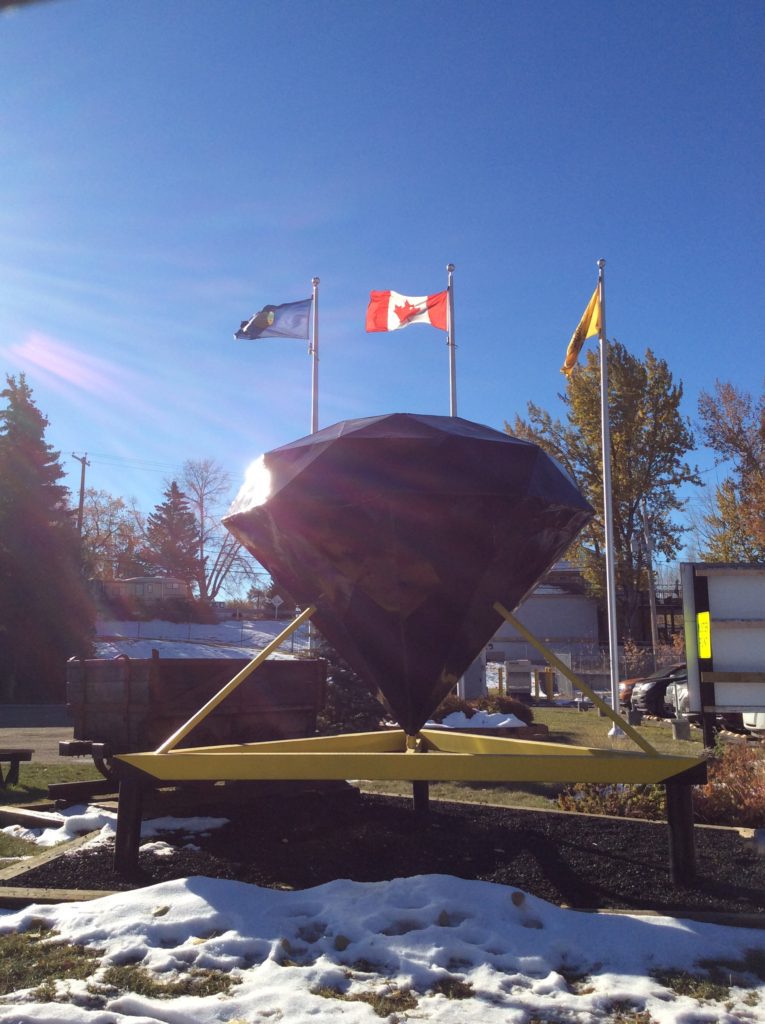 The black diamond in Black Diamond

On the Main Street you find the Black Diamond above.  I found it interesting how the town got its name:

There was some dispute as to whether it should be called Black Diamond after the nearby coal mine that referred to the high grade coal as “black diamond” — or Arnoldville after the local postmaster, Arnold. The dispute was settled when Black Diamond was drawn from a hat in 1907.

OKOTOKS WAS NEXT BUT I WAS IN FOR A BIG SURPRISE

Colleen asked me if I knew how Okotoks got its name. I said “No” and she said just wait and I will show you. Sure enough there, on the left-hand side of the highway was a sign and a turn-out. 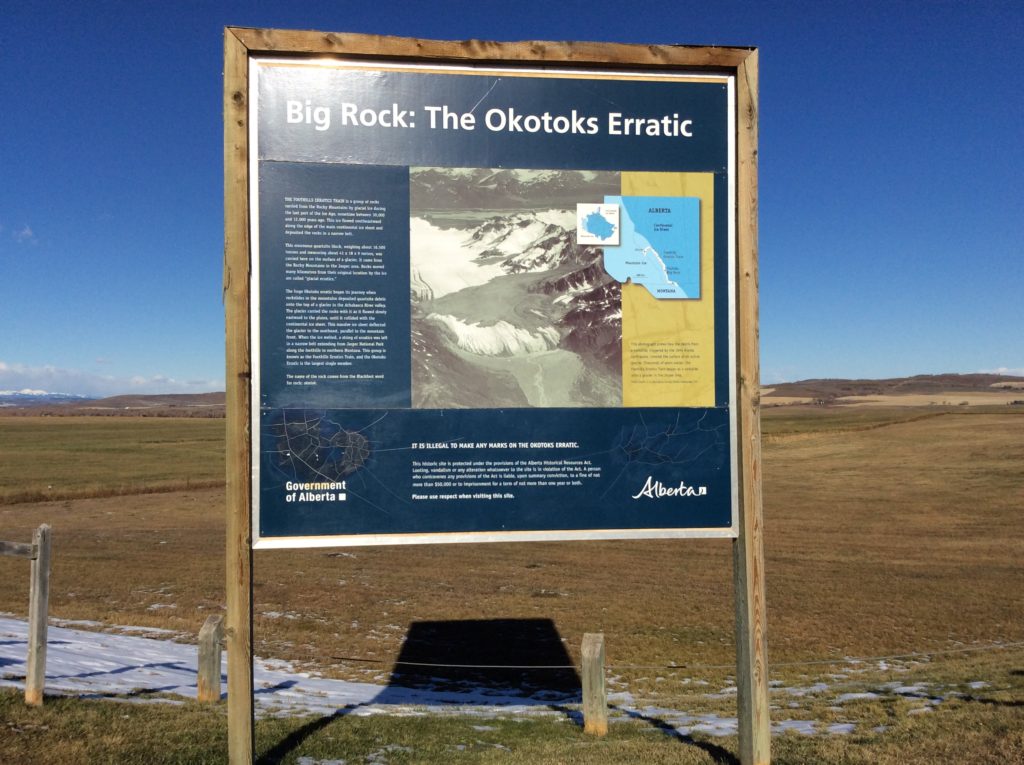 It was an educational trip for me as I had no idea how Okotoks got its name. Colleen introduced me to the Okotoks Erratic! 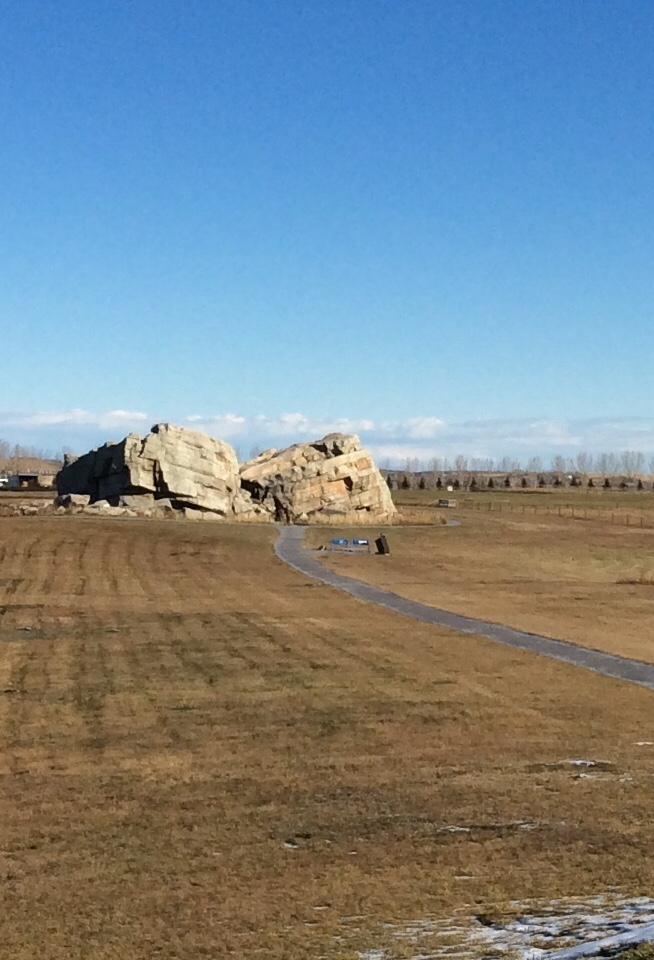 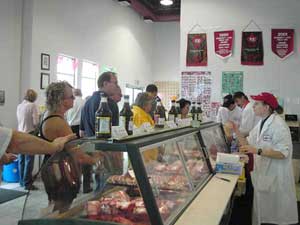 On to Okotoks to the Butcher Shop.  Colleen was sure she had been to one here and just off the highway in the main part of town was none other than Hirsche Fraser Meats.

The Triple A Angus Beef is not only grown by the owners but the banners on the wall show 1st prize cattle purchases the butcher shop has made at the Calgary Stampede and the Canadian Western Agribition. That was pretty special, since I had worked at the Agribition for 10 years and it brought back memories.. 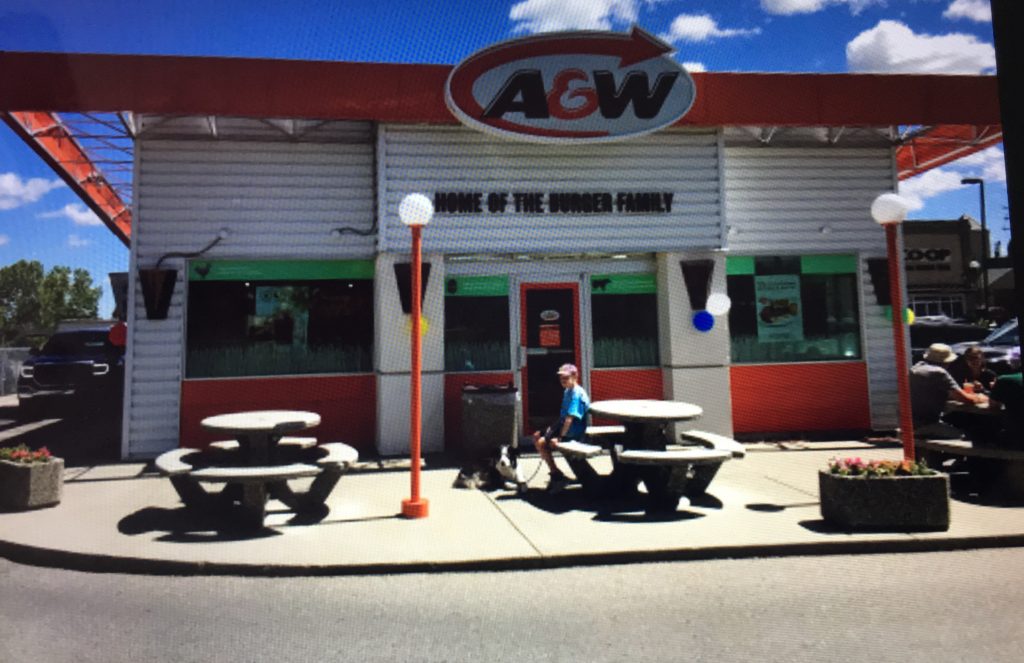 Colleen mentioned we should stop for lunch and in one half block we both saw the sign” Two Teen Burgers for the price of one”.  About right turn and we were on our way into the A&W. 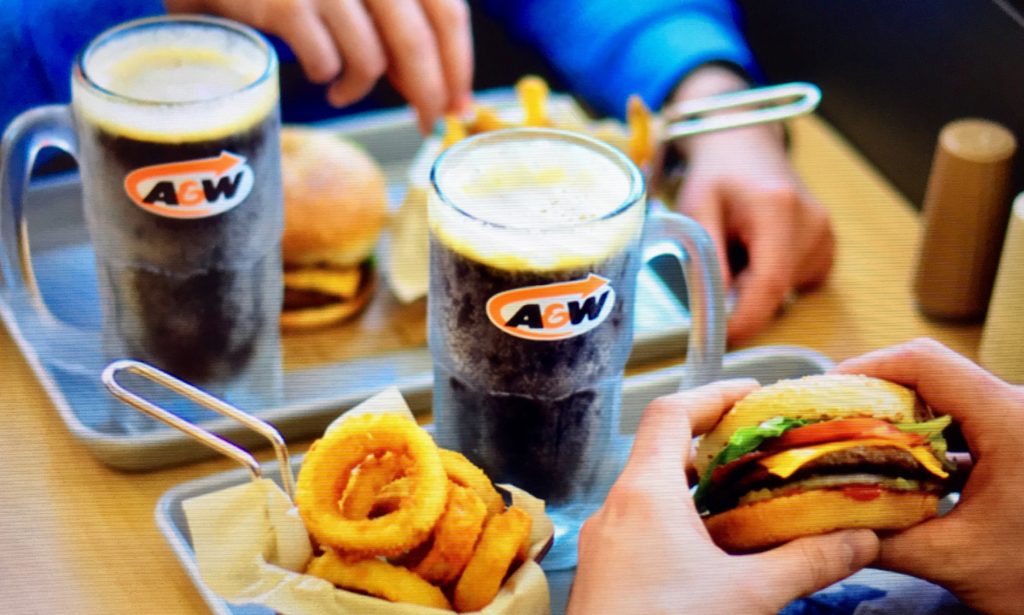 This A&W was clean and inviting and soon we had our order with Wi-Fi to boot. The Teen Burgers were delicious and the root beer was…well you KNOW how good it is! 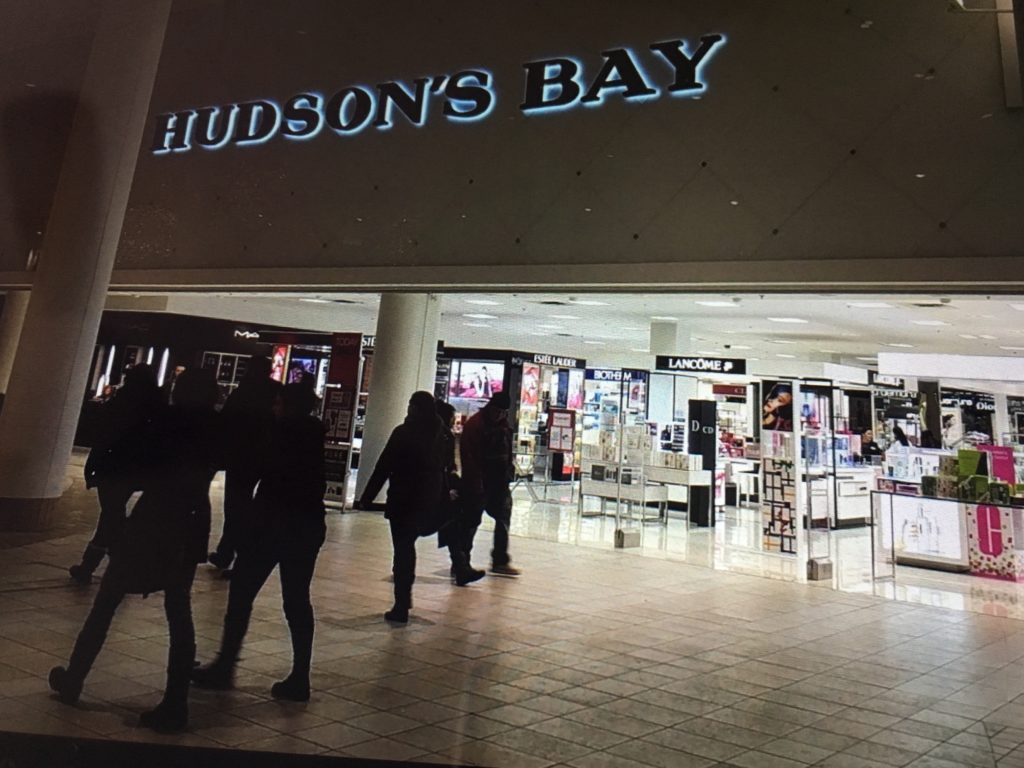 Soon we were on our way back to the city for “Bay Day” at Hudson’s Bay in the Chinook Mall.

A fine day to remember.