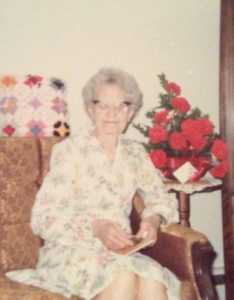 My Mom on her 85th Birthday

This year on Mother’s Day I thought I would write about what it has been like being a Mother. But first of all I want to remember my own Mother. Quite often I think of my Mamma and her index finger. She said she had burned her index finger when she was young and the finger was very soft on the inside from the knuckle to the tip. As a child I loved to touch this finger at the end as it was really, really soft. She not only taught me how to cook but also how to sew. Sewing is something I love to do to this day. Taking apart a waistband on a pair of Lululemon pants and altering them took me four hours and most people would find that frustrating but not me. I knew I would be pleased with the result.

My children can write their own life stories but I will touch on some happenings in their young lives. 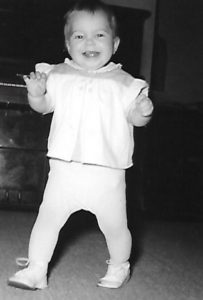 The bringing of your first child into the world is undoubtedly the utmost joy you can imagine. Nothing compares. Colleen, a first child, as is common, had the tendency to excel in everything. A love of music from her first steps. The CBC’s, Don Messer Jubilee, was a half hour showcase of Canadian musical talent and Colleen danced through the whole program and cried when it was over because she wanted more.

Joey was our second child and lived less than two months, all time spent in the hospital. Three surgeries could not save him.  A devestating time for Doc and me. 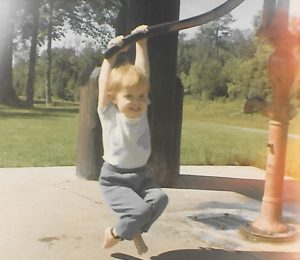 Lisa at our favorite rest stop

Lisa, a tiny little, healthy, four pound girl, with brown eyes was the next addition to our family. Not to be outdone by an older sister, Lisa quietly excellled in whatever endeavor she chose.  Lisa loved to go to bed at 8 o’clock at night but most nights she would wake up and sneak out to the living room at 11 o’clock. Doc would be watching the news and she would curl up on his lap for about a half hour and then toddle back into bed. 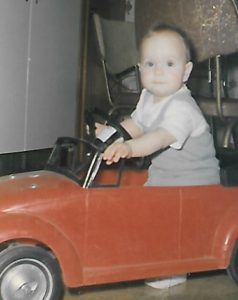 Murray at the wheel

Murray was next and had a language of his own. Milk was “dowk” and water was “umbadoo” just to name two of his words. He also had songs with words that he made up. Doc bought a red pedal car which was supposed to be for Lisa but Murray soon claimed ownership! He also had a close call after he had his tonsils out and started bleeding after he got home from the hospital. I just happened to go and check on him in the middle of the night and he was already a pale shade of blue. Doc and I had him back to the hospital in minutes! 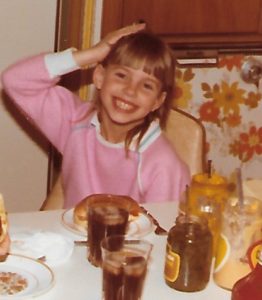 Bridget came into our lives spelling trouble from day one.  Murray was so unhappy that she was a girl as he wanted a brother!  It took years befor he loved her.  We were packing the car to go to Minot when she was  about three years old. Where is Bridget?  Well she was way down at the the end of McPherson Avenue!

Thats a bit of my take on the early years of my kids and me being a Mom.

And yes, many a Mother’s Day I was brought Breakfast In Bed 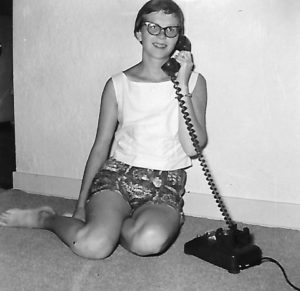