Most of you will be saying, what in the world is “pulling a Liz.” Hold onto your hats ladies and gentlemen and I will tell you. 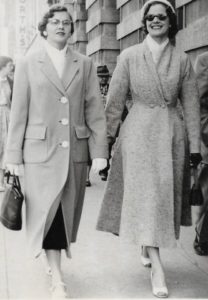 Maureen and her sister Marjorie in downtown Regina, Saskatchewan

I have to go back to my first years of working in Regina.  It was the days of the downtown core in Regina having a few blocks of businesses  and many more blocks of old classy apartment buildings : The Balfour, The Frontenac, The Qu’Appelle.  Now these apartment buildings had been built in the early days of Regina being a city and were filled to capacity.  The city had just expanded to Hillsdale to the south with single family dwellings but no new apartments were being constructed.  There were waiting lists a mile long to get into the existing apartments.

However, a great number of the houses close to the downtown area, were three stories high on narrow lots and had been slightly modified into rooming houses.  This was partly because of the exodus of family members searching for work elsewhere and the opportunity to supplement the family with some rental income.

A lot of High School graduates from around the province emerged to the two major cities, Saskatoon and Regina to find work.  There were very few jobs available in the small towns and farms at that ti 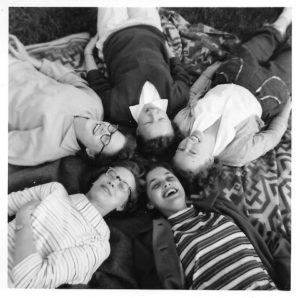 At 2104 McIntyre the owners of the house lived on the first floor and the second and third floors were for female “roomers”.  The house was well built and of course the main floor was very classy. The upstairs rooms were small and we six gals shared one bathroom.  Mind you we didn’t have all the beauty products available now and certainly not electrical tools such as blow dryers and curing irons.  Of course there was no air conditioning and it was very hot in the summertime.  One advantage was that all of us could comfortably walk to work every day. Oh the despair when you broke one of your high heels in a crack in the sidewalk!

The Wascana Park – a cool place in the evenings 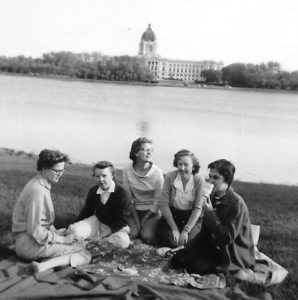 We were not far from the Wascana Park and often all six of us would take our dinners to the park and stay until the house cooled off in the evening.

In 1954 we heard that there was an apartment building being constructed in the 2200 block of Hamilton Street.  Two of our friends from the rooming house, Leah and Liz and my sister Marjorie and I rushed down to the developer and signed a lease for one of the two bedroom suites being built.  We were so excited to furnish and move into this suite. Each of us brought stuff and bought some new things.  I bought a console radio-record player that would play 33 1/3 long play records.  Liz bought a 7′ long red couch.  Of course we had to buy a few pots and pans for the kitchen.

We had a plan.  Each person put $20 every week into the grocery pot.  We took turns each week cooking.  Starting every Saturday till Friday as one could buy the groceries on Saturday at Food Land.  We had an account there and paid it off every two weeks. The one who cooked the next week bought the groceries and Food Land delivered them at 4:00 p.m.  I know my Saturday after buying groceries was capped off with stopping at the National Bakery on Scarth Street to buy fresh bread and lemon or butter tarts.  I remember that before we put the groceries away we just had to have one of those tarts.  So yummy.  Liz was not too keen on cooking so we knew we were in for sausage at least once when she cooked.  Leah on the other hand was an adventurous cook.  She used ever dish and pot and pan we had preparing a meal.  And she had the first recipe I ever saw for Naniamo Bars.  To this day they are my favorites chocolate treat.

We had a punch recipe we named “out of your mind”.

We had a lot of fun living on Hamilto Street Anderson one of the attractions was we were just across the steeet from Central Park.  In the summer there was ball games and in the winter there’s was an ice rink. Young and old people loved being in the park.

Leah, Liz and I all celebrated our 21st Birthdays with Champagne!  Liz and Leah had many friends visiting from Wilcox, SK as they had gone to High School there.  Our place was a bee hive of activity.  Liz was one really good looking  gal.  She had those dark brown eyes and dark hair with a fantastic figure.  We didn’t have a phone for six months after we moved in and guys were always trying to get her phone number!    I remember one time we had a visit from a couple of gentlemen from the U.S. Air Forc Police.  A week or so before they came Liz had gone out with a fellow who was apparently AWOL from the Air Force.  He was long gone. 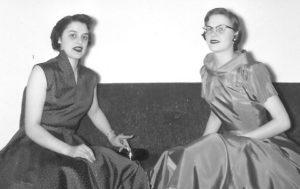 Now Liz was not only pretty but pretty popular as well.  It just so happened that there were times that partying wasn’t just on the week ends . Sometimes it happened during the week.  If Liz  had been out late too many nights she would just call in sick instead of going to work!p

We three named  this “pulling a Liz” when she did that!