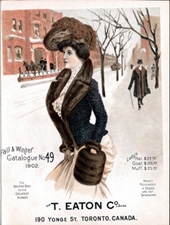 I wrote about my sister Verna and my first Christmas with presents  but there are more stories to be told. As a youngster we were no different than all the families around us in that we had the necessities of life but there was no money for extras. In the fall we were so lucky to open THE parcel from Eaton’s. Of course we had poured over the catalogue for hours picking out all the things we would like to have but actually we were so happy with what Mom and Dad had ordered for us. Mostly there was clothes and boots for the upcoming school year.

Another parcel from Eaton’s?

Christmas for me has always been all about family and friends. With our large family (originally ten kids) and our cousins one half mile away (11 kids) we were a large contingent. You may remember my Dad’s twin brother Paul was married to my Mom’s sister Beda. 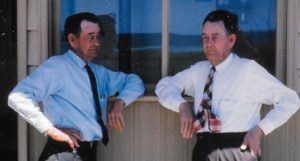 The twins – Paul and Peter

January 24 was the twins, Peter and Paul’s,  Birthday and that was often a time for a celebration dinner for the two families.

Now as you can imagine we were not invited for dinner very often to anyone’s place. We lived 14 miles from the village of Strongfield, Saskatchewan and there were not many families anywhere close to us. I heard once that when you are married and have one or two children you have lots of dinner invitations. After you have three children the invitations drop considerably. When the fourth child arrives you may as well not even think about an invitation. A chance for the whole family to go to friends for dinner was a rare and exciting time. 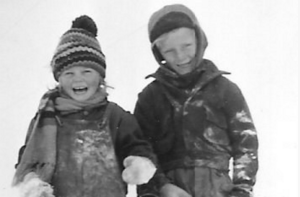 During the holiday season one year neighbors invited both Peter and Paul’s family to their home for dinner. What an undertaking! There were only six in the Snustead family so this was a major job to have over 20 people for a turkey dinner.

The house was small and crowded with such a gang and I remember it was a happpy time. The food was very good and some dishes were different than what we had at home. I would never pass up trying new things so I took everything in front of me! Probably too much.

The most memorable happening that evening came out of the mouth of one of my very young cousins, Garry. He was just a bit more than a year younger than his brother Eldon (who was my age) and was pretty shy. I think Eldon did most of the talking for Garry. We were finished dinner and on to dessert of apple pie. Garry was having a bit of a problem with the pie crust and for once spoke up loud and clear for everyone to hear.

I can’t eat the board!

Needless to say from that time on in our family “the board” was generally used to refer to pie crust that was not exactly tender and flaky!