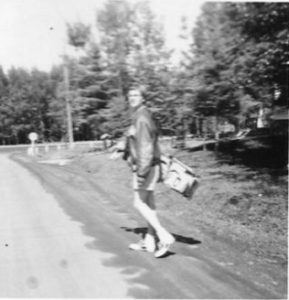 Throughout my life I never related to what I was doing or what I had done to my age. It just was not something that I considered when I would try something.   And I would try most everything although sometimes once I did it I wouldn’t have to do it again: like waterskiing or horse back riding.

I remember as a kid how I looked forward to being six years old as I could then start school.

There was no kindergarten back in those days, but I had already been to the school a few times. In fact, I was part of the school’s Christmas Pageant when I was just five — reciting  all 27 verses of ‘Twas The Night Before Christmas. I have to thank my older sisters for that, they really took a big interest in me and taught me so much.

The next date I looked forward to was my 16th birthday. My Dad took me to Outlook, SK to get my Saskatchewan Drivers License. We didn’t have driver training but I had driven the 1/2 ton around in the fields at home trying to follow the same ruts where someone else had driven — which wasn’t as easy as you might think.

I got my driver’s licence that afternoon, driving our 1940 Ford Sedan for my test. My Dad bought that car from some guy from Kyle, SK who had driven the car all over his farm, through the summer-fallowed fields and the wheat fields after the crops had been combined. We could pick out the wheat stalks from many places of the car, but it was the dust in the headliner of the car that was most remarkable. No matter what we did to try to clean that headliner, we could never got all the dust out. When you hit a bump on our gravel roads, you got a face full of dust!

I do remember my 21st birthday. I was living with three other girls in an apartment and we bought champagne to celebrate. I’d bought special glasses for the occasion but it turns out they were Martini glasses, not champagne! It was the best champagne you could buy at the time, and I would guess it was probably Mumm.

The next date I remember was when I was in my early 30’s. My husband Doc and I and our friends Don and Jackie Meyer been to the Thoroughbred Horse Races and decided to take our winnings to a bar to celebrate. We ordered our drinks and the waiter was back from bar in TWO seconds flat to me — just me — for my I.D.! Did I give him a big tip? You can bet I did!

When we got married, the doctors had told Doc that because of the bone graft in his spine and the pain he was in that he may not live long, maybe three years. This was probably the reason we didn’t pay any attention to age: every new day was bonus and he certainly out-fooled the doctors by living 29 years.

I read an article this spring about research being done in London, England about aging. The age on your birth certificate doesn’t necessarily have any bearing on your body’s age. You may have the heart, kidneys, spleen, lungs, or any parts of your body older or younger than your age. Many 39-year-olds have hips that seem to be 30 years their senior. Some 78-year-olds have the heart of someone 30 years their junior.

Vegas Sugar Daddys? Not So Likely!

If you’ve ever been in Las Vegas at the casinos you might have noticed the seniors. You’ll find the odd sugar daddy with a young woman on his arm, but most of all, in fact if I was to guess, I’d say that 80% of the crowd, until around 8:00 p.m., are grey-haired women. They’re usually in groups — from three to six — all one-armed-bandit-ing, spending the money they’d received after their husbands died and they sold the farm! OR the retirement money he left them! (In the USA, the 2014 census shows that at age 85, there were almost twice as many women living as men.)

I have never put any stake in the value of the age on your birth certificate. My philosophy is that if you think you are old, chances are you have started to act like you are.  I say on my blog that 78 is the new 65 and I stand behind it, 100%!