One day last week, I had a tee time with my playing partner Ruth at a local course just after lunch. Yes, that was an odd time for us to start a round of golf as we prefer morning (preferable early) tee times. However, as some errands had to be run, an afternoon tee time was perfect for us, and we met at the course a little after eleven o’clock.

We got to the first tee and could see the foursome ahead of us, midway down the fairway, making their second shot. The starter said we could go down to the forward tees.

“You’ll be on your own today. Have a great round of golf,” he told us cheerily. With that foursome ahead, and knowing how chocker-block full the parking lot was, I was pretty sure that, as a twosome in a world of foursomes, our afternoon looked destined to be anything other than a quick, four-hour round of golf.

I drove our golf car to the forward tee box and were about to tee off when a second golf car with two men in it came towards us.

We’ll be joining you

“We’ll be joining you,” said one of the two. That suited me just fine.

One of the men played from the tips, the other played from the whites. I didn’t realize that this wasn’t an ordinary round of golf for them until the man playing from the whites went to hit his second shot. This was a course lesson. The man who’d played from the back tees began maligning his student. From the place where the student landed his ball, his hit would be followed by at least two or three shots, until the instructor was satisfied, had explained enough and the two got into their car and moved on.

I have seen Pro’s take their students out to a space on the course that was void of other players but I have never seen them join another twosome. The next time I go back to this course, I will ask if this is a common procedure at this course as it was certainly odd to say the least.

Apart from the hits and re-hits, there was, as you can imagine, quite a bit of discussion between the two men before and after shots. We were almost two hours playing seven holes.

Later, I thought about what had transpired. Now don’t get me wrong. I know the value of on-course lessons. Having an analysis of every shot taken in the arena of play is such an advantage over hitting balls on the driving range.

What I did find it to be, however, was incredibly bad etiquette. They should have been upfront with us from the very start that they were having a course lesson, asking us if the delay would be something acceptable to us. By not doing so, it showed bad manners.

I have to admit I was quite happy when the Pro said that they were leaving us after the seventh hole and for the following eleven holes, we were by ourselves. 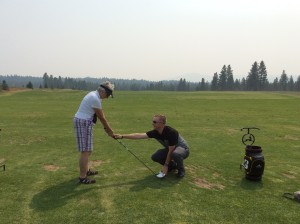 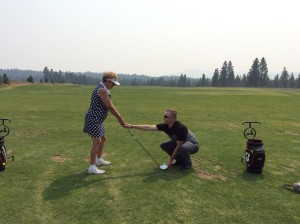 Now your hands are on the club where they belong.