There are times, I must admit, that a golf club has been close to coming out of my hands, going, whoop whoop whoop, cartwheeling across the fairway.  This, however, has only happened when it has been raining so hard that the water is pouring down over the brim of my cap!

That near-slip is when my gloves are soaked to the skin and yes, that’s no typo — when golfing in the rain, I’ll wear gloves on both my hands.  These are so called rain gloves and they certainly help me to hold onto the club when it is raining.  But in a downpour, even the rain gloves have a hard time keeping the shaft of the club in my hands.

There has been quite a bit of unleashing of golf clubs out of the hands of professional golfers in the last 20 years.  I guess it may have happened before that time but of course we didn’t have the same amount of TV coverage that we now have.  Cameras are everywhere and if the networks miss something amiss, every Tom, Dick and Hanna has a phone capable of capturing the mishap.  Social media has a habit that becomes rapid fire exposure compared to what general public would have seen years ago.

I think this behaviour is not acceptable in golf, period. Although golf requires physical skills, the biggest battle on the golf course is the one between your ears. Making a bad shot can be super frustrating, true. But showing that frustration to your playing partners magnifies your weaknesses. 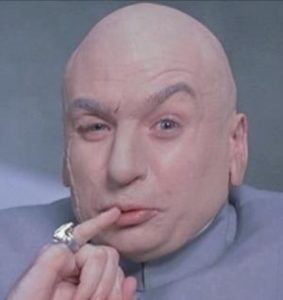 Having said all that, my oldest daughter has a “Don’t Tell Mom” story of how one of her sisters was SO FED UP with her game, she took that pitching wedge and whoop whoop whooped it on a wicked trajectory where it landed, well wedged in the green, some 30 metres away. Her playing partners were stunned until she let out a gi-normous belly laugh a few seconds later, deadpanning something like, “That’s the best wedgie I’ve ever had!” Of course, I’m certain this story is simply folklore and it’s only inserted for brevity.

Think before you break, stab or throw your clubs on the golf course. If you’re so frustrated with your game, there are options. You can quit golf altogether, or, a better solution is to go see your local PGA Pro and get a checkup. He or she will get you back on the right track, maybe even faster than the time it takes to get your shaft replaced.